Lit up in an otherwise dark Macalester dorm basement, Neil Hilborn serves as tonight’s slam emcee. His frame taut beneath his signature suspenders and his slicked golden hair restless beneath his agitated hand, he knows how to rile up a sometimes reluctant room. As the Macalester slam poetry team’s assistant coach, Hilborn regularly rallies a crowd of roughly 90 college students. Not too long ago, he was on that stage as a member of the team. And even a college nationals-winning poet like himself has had to deal with the arbitrary justice of slam’s randomly selected judges.

But the people who do like poetry, really, really like the Twin Cities. With a scene known for its supportive poets, the cities also have national opinion in their favor. The adult St. Paul team, Soap Boxing, took home back-to-back national titles. The Minneapolis team, older but slightly less acclaimed, is gaining ground, placing fifth in the most recent national competition, ahead of St. Paul.

Then there’s the Macalester slam team. Founded in 2009, the team earned a name for itself and third place at its first college nationals. A surprise to the other competitors, the team’s success was no surprise to nationally-ranked poet Sierra DeMulder who volunteered to coach the team in the home stretch. The following year, the team won the whole thing. The team is currently competing in this year’s national championship in La Verne, California.

“I’ve written for as long as I can remember,” said team founder and member Dylan Garity. The other day, he stumbled across a piece of saved writing on his computer: his first stab at a novel, co-authored by his sister. It wasn’t much of a read, he laughed.

When he compares slam to other art forms, he uses air quotes around phrases like full length. “The thing that I think is so cool about slam poetry,” said Garity, “is you’re trying to compress as much actual interaction and real connection with the audience into this tiny three minutes of your writing and performance and interaction with them.”

“Watching somebody who’s able to say so much with so little is really, really cool,” Garity added.

Garity talks fast, his passion for writing and slam crowding his speech with occasional stutters. With the most experience on the team, including a spot on the fifth place Minneapolis adult team, Garity is the de facto leader. His second-story apartment serves as a practice space for the four or five-hours long weekend sessions. By the time the poets take their work to nationals after months of performing at regular Mac, St. Paul, Minneapolis, and other campus slams around town, they’ve performed each piece countless times.

Even still, Shain can’t hold back in the audience as her teammates perform. “I have heard some of these poems hundreds of times, hundreds. And I still cry,” she said. 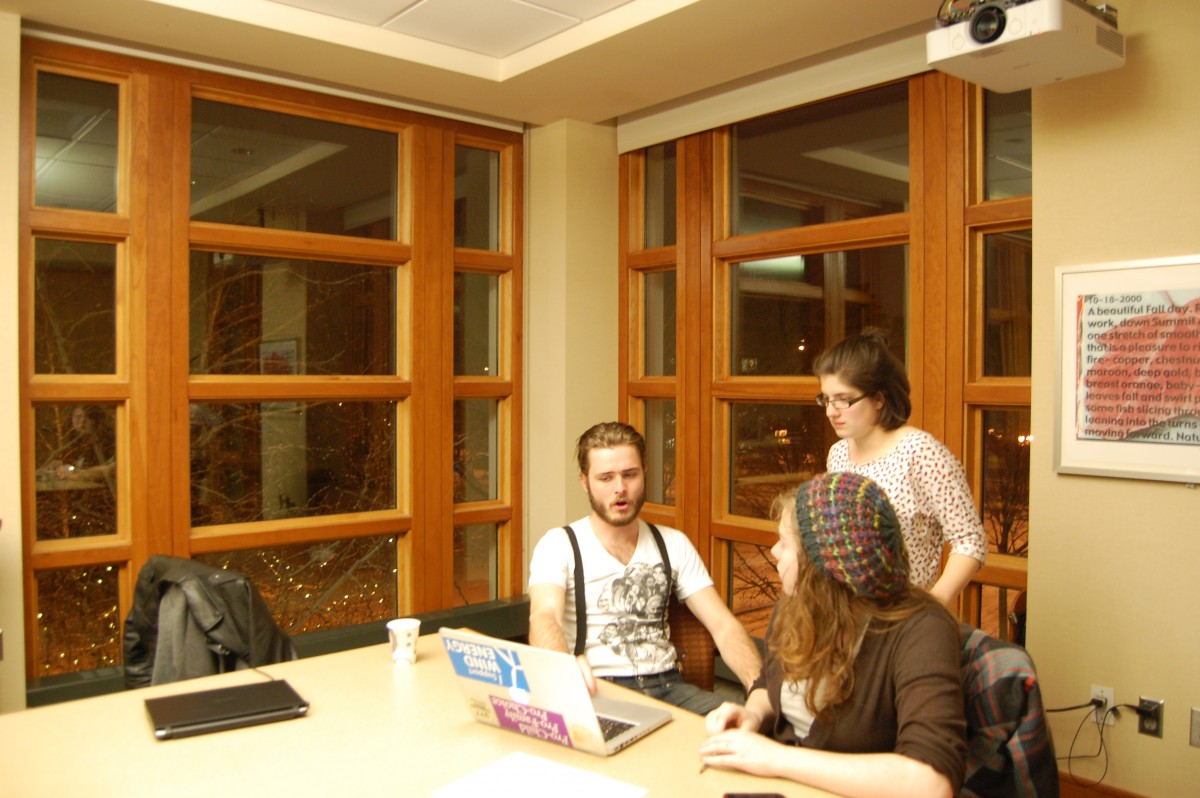 On a late March Sunday when the weather is finally warm enough for the team to practice on Garity’s screened-in porch, the poem everyone is talking about is Niko Martell’s “Queer Guns.”

In the lead up to nationals, the team was looking to strengthen their political pieces. Shain, who used to drive into New York City from her home in New Jersey to see slams, said the New York scene tends toward politics. To score well against NYU and several SUNY teams, pieces like “Queer Guns” are critical.

It’s a plodding piece, tied to the refrain “I think about it,” as Martell explains how it feels to know that, as a transgendered man, more than just a few errant internet chatroom participants would feel nothing, or worse, about him being murdered. It starts off funny, with a peppy introduction to the pro-gun, gay rights group, Pink Pistols. By the end, however, everyone in the audience stares soberly at the stage.

From his first slam ever in Nebraska, where he was so nervous he dropped his poem, to his third time going to nationals, Martell said of his writing style, “I’ve changed a lot.” He’s moved from universal themes to much more personal material. More recently, he’s tried to add comedy as well after a teammate pointed out the accidentally funny charm of his lonesome poem all about typefaces like Wingdings.

The team is also hoping its secret weapons, two new female poets, will help defend its title. Garity is particularly excited about Anna Binkovitz’s withering and sassy “Reasons” poem, directed at an ex-boyfriend. “Love is not a part-time job,” Binkovitz begins, moving through the paces of a clichéd love poem. But like a text sent to the wrong person, Binkovitz interrupts herself and shouts, “Oh wait! I wrote that for someone else.” (Disclosure: Anna Binkovitz is, you guessed it, related to me. She is my younger sister and the only reason I ever even went to my first slam.)

In practice, as the team debates which jokes hit hardest, Garity tells Binkovitz, “Definitely call his dick small,” reasoning that no male judge is going to want to protest that too strongly and all the female judges will sympathize.

Rachel Rostad is the final competing member of the team. Along with alternate Kat Fleckenstein, she seems less consumed with the power of slam than some of the others. Her writing deals in dense but compelling imagery with lines like, “Imagine the ruby sirloin of your lower back/ the boneless steak of your diaphragm/ Undress your skin, and you are a display in the butcher’s window.”

Neither Rostad nor Fleckenstein are sure they’ll stick with this after college. If they do, however, there is actually a way to make it happen. Their coach, Sam Cook (“without an e” accompanies his handshake), runs the St. Paul team, tours nationally, and has made a life for himself with poetry.

“Having this incredibly supportive community of professional and strong writers in the Twin Cities, we wouldn’t be able to do this without that, at all,” said Garity. Whether it was help from people like DeMulder or from local poets who volunteered to perform at Mac slams free of charge, Garity acknowledged the team’s quick rise to success, has everything to do with the Twin Cities poets who welcomed them, applauded them, and told them, “Fuck the score.”