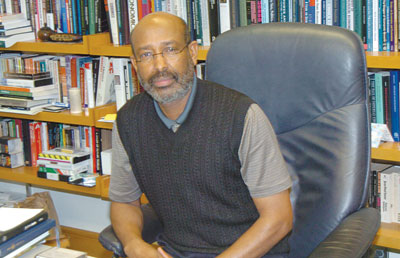 As students return to Macalester College this fall, it is unlikely that any of them will have to write an essay entitled, “How I spent my summer vacation.” Professors don’t often lecture about such subjects, either. If they did, however, Professor Ahmed I. Samatar could at least fill up one semester with fascinating lectures at the forefront of the most critical political issues facing our world today.

Over the past three months, Samatar traveled throughout China and East Africa meeting with scholars from every corner of the globe, writing academic articles on such topics as the rise of Islamism, and producing television programs to be distributed in Somalia, the country of Samatar’s birth. If that wasn’t enough, now Samatar will lead Macalester’s Institute for Global Citizenship in the first year of its existence.

“It is a major innovation,” said Samatar of the program he heads as dean. “The institute will service the whole campus, and it will bring together the global mentality of Macalester, civic life, and the community. It is about creating a dialogue.”

Late last spring, at the institute’s inauguration, Samatar welcomed the event’s guest speaker, none other than Kofi Annan, Macalester alumnus and the United Nations’ secretary general. Samatar, who has taught at Macalester for 13 years and is also dean of the international studies department, said that the institute will offer courses and certificates for students and develop multidisciplinary faculty seminars on pressing global issues.

“Kofi might come back and teach a course,” Samatar mentioned casually. He also added that students will engage in community projects via the institute. After all, whether it is University Ave., Lake St., Brooklyn Park, or even Eden Prairie, international communities are always a part of our society at a large.

Samatar first came to America from Somalia over 30 years ago, giving him a sweeping view of how immigrant communities have developed and evolved here. With a bald head, full beard, and round spectacles, Samatar has the classic look of an accomplished professor. (His brother, Abdi Samatar, is a professor of geography at the University of Minnesota.) He often speaks fast and to the point.

In the Minnesota Spokesman-Recorder’s recent phone interview with Samatar, he spoke at length about the current state of Somalia, which has gone without a government for 15 years and long suffered violence and conflicts between innumerable warlords and militias. Peace talks between the Transitional Government, which has never been effective or held power since it was formed two years ago, and the Union of Islamic Courts have continued in Somalia’s neighboring country, Sudan.

Peace in Somalia
Over the past three months, the Union of Islamic Courts and their militia have pushed out the remaining warlords from Somalia’s capital, Mogadishu, and they now control a large portion of the country. This development has worried many Western governments as the courts seek to establish a government and nation based on their interpretation of Islamic law.

Some U.S. officials have accused the courts of being linked with al-Qaeda. Denying this charge, the courts have been able to do something that no other group has done in Somalia: They have brought relative peace and a renewed optimism to a people who have suffered for too long.

Debates and discussions about these issues have heated up in Somali communities in the Twin Cities and across Minnesota.

“It is important that the West gives these courts a chance,” said Samatar. “But we must be suspicious. There are two immediate and legitimate concerns against the rise of an Islamic movement. If they move to a government like the Taliban, there is the danger of both violence and terrorism that can grow from that. There is a historical basis for this.”

When the Taliban took over Afghanistan in the 1990s, they were welcomed with cheers and open arms by many people, who had long since grown weary of the fighting between various political factions. Those cheers soon fell silent, however, under the Taliban’s repressive regime.

While in Nairobi, Kenya, last month, Samatar met with Somali businesspersons, leaders, and fellow academics who meet annually to develop essays and dialogues on nation-building in Somalia, among other issues. The group publishes their work in the academic publication Bildhaan: Journal of Somali Studies, and also develops television programs and materials about education, health, security and business for wide distribution in Somalia.

In an essay that will be published later this year, Samatar has developed three scenarios for how the Islamic courts and a potential government could develop. He calls the first “repressive Islamism” and again gives the Taliban as an example. He said that this type of government is a “political dead end,” severely destructive, and often turns into a breeding ground for terrorists.

The second is “conservative Islamism,” for which Samatar gives Iran as a leading example. He said that while this kind of government recognizes the importance of science, education, and economic development, it still has a “minimum tolerance for diversity” and understanding of human rights.

The third, “cosmopolitan Islamism,” recognizes the importance of human rights, diversity, economic development, women’s rights, and, most importantly, the supremacy of law and the constitution even if the government and courts are inspired by Islam. Samatar said that no country has truly realized cosmopolitan Islamism, but some, like Turkey and Malaysia, have approached it.

“If Somalia wants to be a pioneer in Africa and in the world as a whole, they should move into the third one [Cosmopolitan Islamism],” Samatar said. He added that, at the moment, proponents of the repressive and conservative movements have the upper hand in Somalia. Ultimately, as the transitional government and the Islamic courts struggle for power and negotiate in the peace talks, Somalia’s fate remains uncertain after all these years.

“There has always been a relationship between religion and politics,” Samatar said. “But the important thing is how that relationship is created.”