I get into the WNBA annual draft the same way I used to get into the NBA draft before it became nothing more than too many annually selected players long on potential but very short on stardom.

The W draft prospects are four-year seniors, matured players. But like any draft, some will be busts — one (training camp) and done. Nonetheless, I enjoy watching these women college basketball players play below the rim, sizing them up. Sadly though, to find any local male media type who’ll discuss the three-round April 16 WNBA Draft with the same seriousness with which I approach it is a virtual no-go.

Although I don’t do them, and probably never will, it was refreshing to see Nate Parham’s WNBA mock draft among the three included on the Minnesota Lynx’s draft central website — he’s based in Seattle and covers the league and women’s college basketball for “Swish Appeal.” He is as passionate about women’s hoops as I am. 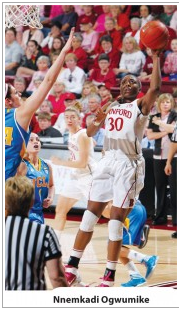 Versatility will be in full vogue in this year’s draft, believes Parham. “If you have a player who can do many things for your team, she will be a key asset.”

Los Angeles is scheduled to pick first next week.

“I think the best player in this draft is Nnkadi Ogwumike,” proclaims Parham, who covers the Pac-12 and has watched Ogwumike throughout her four years at Stanford. “The question whether Los Angeles will go for [Ogwumike] because of who they already have on the roster is a bit more complicated. She is one of those players who they have to take and figure out how to use her.

“I think the world of her as a prospect,” he says of Ogwumike. “She is a player who has gotten better every year and added something to her game. She’s extended her shooting range out to the three-point line. Her footwork is outstanding, and that will carry over to the pro level. I do believe she has the chance to step in and be one of the best power forwards in the league right away.

“After her, it’s a little bit harder to say who will have the biggest immediate impact,” states Parham.

So who should the 2011 champions Lynx, with all five starters returning, select at number three?  Parham tells me, “You look at their roster. Wouldn’t it be nice to have a backup point guard behind Lindsay Whalen?” Exactly what I have been saying since the team acquired Whalen two years ago. 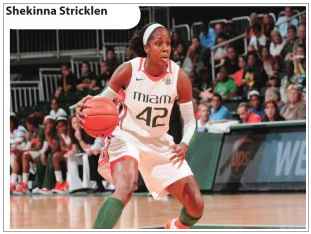 “I think Minnesota is in an outstanding position for a draft pick,” he notes. “You can afford to pick the best player available. Shekinna Stricklen could be there at number three, but Shenise Johnson would be a great fit for that team.”

I agree — the 5-11 Johnson is rated either one or two among the guard draft prospects. “For a team like Minnesota that’s already talented, that already has scoring power, a player like Sherese Johnson would help your team. She can shoot the ball [a career 17-point scorer] and handles the ball well. She is a smart player, constantly around the ball, and makes smart plays,” explains Parham.

“Once you move down the draft, you  will see a lot of players who could come in and be effective role players,” continues Parham, who likes Texas A&M shooting guard Tyra White at No. 12 for Minnesota, the final selection of the first round. Others see either centers Sasha Goodlett (Georgia Tech) or Chay Shegog (North Carolina) as Minnesota’s second pick.

Personally, I think that if she’s still available the Lynx should take Notre Dame power forward Devereaux Peters with this pick. She has a fiery edge the team could use, perhaps as Rebekkah Brunson’s backup.

“With an 11-player roster, it will be about who can come in and contribute something to the team,” concludes Parham, “and matches their skills to what the team needs. You have a number [of players] in this draft that might do extremely well in one situation and not so well in another situation.”