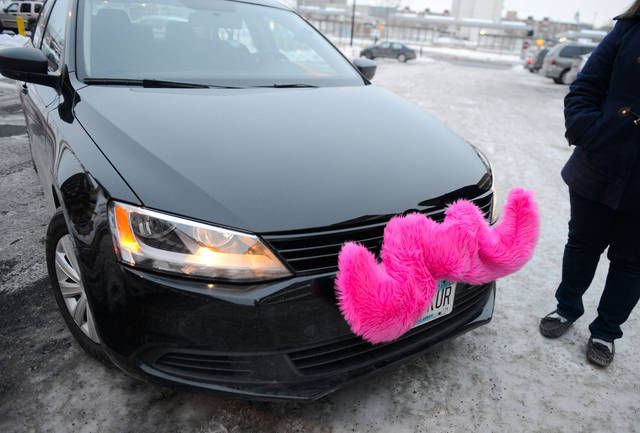 Mallory Kurkoski, 2nd year Carlson part-time MBA student, works about 20 hours per week as a driver for Lyft. She is shown here at the beginning of her shift on Monday. (Photo by Lisa Persson)

The family social science sophomore is taking advantage of a two-week promotion that offers free rides in honor of Lyft’s Feb. 27 launch in the city.

“When I don’t have to pay for it, why not?” Henderson said.

While some University of Minnesota students are smitten with the app, Lyft’s arrival in Minneapolis clashed with current city ordinances. Now, safety and regulation concerns are making city leaders and taxi businesses reluctant to let the company in.

Lyft, a citizen chauffeur service that connects drivers and riders through a mobile app, delayed its expansion into Minneapolis for months after city leaders told the company that its drivers would need to purchase taxi licenses.

The industry campaign, which launched Feb. 27, seeks to educate the public about the potential risks that come with ridesharing apps — which aren’t subject to the same strict regulations taxis are.

Since Lyft isn’t charging riders during its promotion, it has so far evaded city punishment for not buying licenses. But it’s unclear whether the stalemate will continue once the deal expires.

Minneapolis leaders are in talks with St. Paul and the Metropolitan Airports Commission to draft regional regulations that would legalize Lyft, but a draft of the new rules isn’t expected until June, according to a city statement.

“Customers should have confidence that the service they’re using is meeting safety and other standards,” the city said in the statement.

Lyft will continue conversations with the city in the coming weeks to try and come to an agreement, Lyft spokeswoman Paige Thelen said.

In the meantime, some University students are trying the new service and seem excited about it.

Catching a ride with a Lyft driver is a good way to get off the streets on weekend nights, Henderson said, which could help prevent crime.

Riding with a stranger also isn’t a problem, he said, because Lyft app users have access to each driver’s picture and contact information.

“I don’t really think there’s a lot that could go wrong,” he said.

Rather than paying fares based on a meter, Lyft riders use the mobile app to pay at the end of the ride, Thelen said.

Henderson said he first downloaded the Lyft app when the company was only operating in St. Paul, where it debuted in August. Under St. Paul city ordinance, cars must have meters to be considered taxis, so Lyft sidesteps regulation.

But in Minneapolis, city code and leadership aren’t yet allowing Lyft to operate for pay.

Minneapolis leaders haven’t seen evidence that Lyft drivers have the commercial liability insurance to cover a driver who’s serving a customer for pay, according to a city statement. Part of Minneapolis’ licensing process ensures that taxis have proper insurance, the statement said.

While taxis are regulated fairly strictly throughout the country, Sutton said, ridesharing companies can lack some of taxis’ safeguards, like commercial insurance and background checks conducted by law enforcement.

Some students aren’t so worried.

Graphic design senior Matt McVeigh said he used Lyft for the first time this week, adding that his driver was a friendly Minneapolis woman who wanted to make extra cash.

One of the woman’s family members was worried about her driving people around late at night, McVeigh said.

But McVeigh said his Lyft experience was safe — he and his friend even took a “selfie” with the driver.

“These are people that are kind of like your neighbors,” he said.

But Lyft doesn’t agree with that comparison.

“Lyft is not a taxi. It’s a new and not-accounted-for transportation alternative,” Thelen said. “Lyft does not fit into or violate any existing city law.”

This attitude is common among ridesharing companies, Sutton said, making it challenging to prevent them from operating in cities that might think differently.

“Enforcement is the only thing that works with these companies,” Sutton said.

Henderson said it might take a while for ridesharing companies like Lyft to catch on with students, since they’re new and unique. But he said the service is ideal for students of drinking age who don’t want to take the bus downtown or to the bars.

McVeigh, too, said he was excited the company launched in Minneapolis.

“I think Lyft is a fresh perspective on [ridesharing],” McVeigh said. “I think it’s an awesome solution for students.”