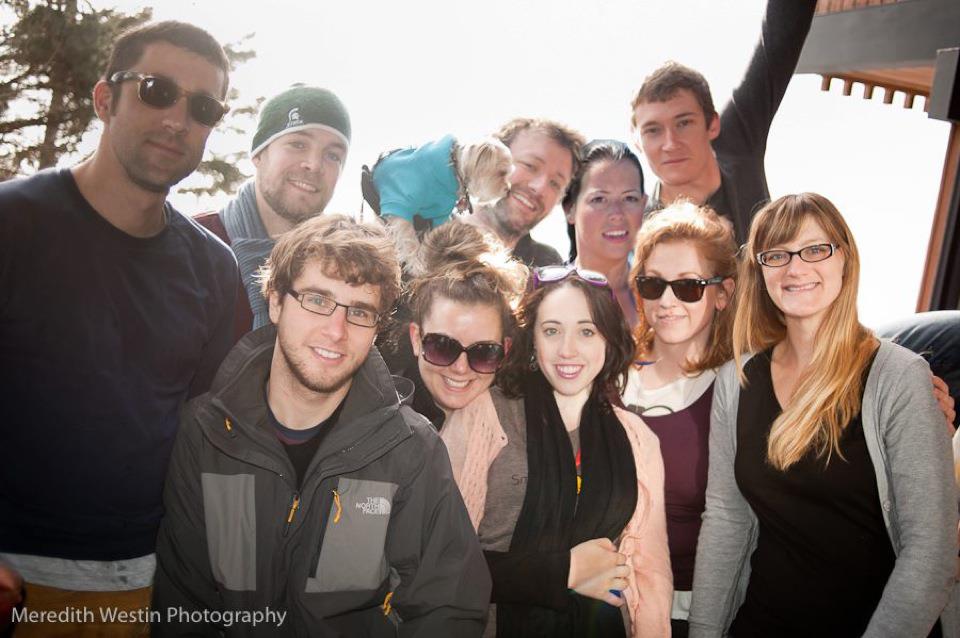 I ventured out of the Cities this past weekend to go on a little ski trip known fondly as #lutsenawesome. We packed up ten people and one dog (my parents were trying to figure out how many skis Ninja would need) into three cars and went up to Lutsen for the following activities as advertised in the Facebox event:

– More wine, maybe some whiskey too

I rode in the PM car where I told the two others we’d play I Spy and share our life stories. The others all left at an ungodly early hour and by the time we got there they were happy and cozy and ready to feed us dinner and pour us drinks. I woke up the next morning with a friend and a dog in my bed, to the smell of sausage (so much for my month of non-alcoholic-vegetarianism) and wandered downstairs to seek out a cure for my hangover.

Three glasses of orange juice, two waters, and a Bloody Mary later, I got suited up in my ridiculously corny ski outfit. I started to worry that I wouldn’t remember how to ski. However, skiing is like riding a bike—except more like skiing—so I was able to manage to stay upright until the very end of the day when I sort of just skied over my pole and fell over. Besides having to make a few work calls on the chairlift and from the top of a ski mountain, skiing for the second time in ten years was far from impossible. Packed into a gondola with friends, discussing things that don’t need to be repeated at this particular moment, we did much of the awesome and made many of the memories.

That night not only were there tacos and bed parties and so much laughing, but we got to see a fabulous show by the 4onthefloor and Dessa. I couldn’t have had more fun dancing and clapping and stomping until some dumb guy decided to stage dive onto us. It doesn’t take long for me to grow tired of being stepped on, spilled on, shoved, and having some random drunk gal’s hair draped all over me, so I retreated from the crowd to calm down after maybe half of Dessa’s set. I have never been so disgusted by a crowd at a show in Minneapolis. Even though I believe that Minnesota Nice usually means Minnesota Passive Aggressive (not to be mean, some of my best friends are Minnesotans!), I’ve become used to Minnesotans being polite and respectful and this was a completely different world. The people who had been benign or even enjoyable during the 4onthefloor’s set had become a bunch of obnoxious twits. I’m sad to say that this really detracted from what started out as a fabulous show.

The following day was a lot of lounging (mixed with a little yoga), which resulted in my work email inbox getting down to 19 messages. That night after our usual hot tub and pool visit (complete with shower limbo), we ate a delicious meal and then lazed around polishing off the wine. I decided to walk the dog, and once I was outside I could barely get myself to go back in.

Whenever I’m out of the Cities, I want to spend my nights with my face towards the sky soaking in the stars. When I’m visiting my parents in North Carolina it’s hard to resist driving up their long driveway with my eyes on the stars instead of on the road. Even better than a night sky is a night sky above crashing waves where it’s so dark that only the waves breaking can be seen. I could have sat on a rock, wrapped in blanket, for a good half of the night if I hadn’t been worried I was being anti-social (or missing round two of Spin the Bottle). I convinced everyone else to run outside later but had a particularly lovely moment with a particularly lovely friend talking about how beautiful it was out and how it made everything just seem right. Something about watching nature be gorgeous (naturally!) makes everything seem simple and straightforward and you just know life will always work itself out.

On MLK day, we hit the road, and after a mad rush to pack and a minor—well, car breaking down in the middle of the road—hiccup, most of us made it to Fitgers for lunch (including Ninja, but don’t tell anyone) and then we all made our way home from Duluth. Settling into a bed without ten people and adjusting to showering without three other women takes some getting used to. #lutsenawesome lived up to its hashtag and it reminded me of how nice it can be to take a short trip out of the cities to some of Minnesota’s other lovely spots. Next up, #duluthawesome?