You can view the menu before you visit Lutong Mekeni, the new Filipino storefront at 789 University Avenue West in St. Paul, by first checking out the restaurant’s Facebook page, but unless you speak Tagalog, it probably won’t do you a lot of good.

Here’s what was on offer last Saturday:

I was able to find translations for most of the names of dishes on the Internet, but another message on the Lutong Mekeni Facebook page stumped me: “Lahat ng pagod at sakit ng katawan pansamantalang nawawala sa tuwing nakikita ko ang masarap at ganado nilang pagkain.” I fed this through an online Tagalog-to-English translation site, with this result: “All fatigue and body aches temporarily disappear every time I see the delicious food they herd.”

How can you resist that?

Some of the names might sound familiar, but Filipino menudo, a pork stew with tomatoes, potatoes and onions, is nothing like its Mexican counterpart, a spicy tripe soup best known as a hangover cure. And the Filipino version of adobo, meat slow-cooked in soy sauce, garlic and vinegar has only a passing resemblance to its Latin American namesakes. Pancit is one of the few Filipino dishes that some foodies may be familiar with, and is usually prepared with very thin rice noodles; the pancit malabon offered at Lutong Mekeni is made with a much fatter rice noodle. 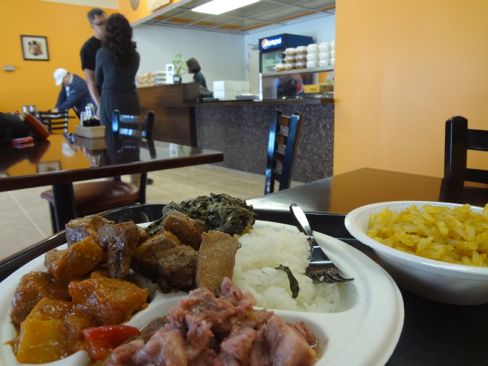 Ordinarily on Saturdays, you get your choice of two entrees for $8.75, but chef-owner Jun Maniago offered me small tastes of several different dishes, and then let me choose a four-entree combo for $10.75. I am glad that he gave me a chance to sample the dinuguan, a pork blood stew, which I can only describe as a once-in-a-lifetime experience—and I intend to make sure it stays that way. But nearly everything else I sampled was delicious, including the menudo, adobo and pancit, and the laing, stewed taro greens in a savory sauce. I’m not sure what went in to the Bicol Express (another savory stew, named after a train), but reconstructing it with a little help from Wikipedia, I would guess that it’s pork, onions, garlic and shrimp paste.

One dish that I didn’t get to try was the Inihaw na Bangus, a whole milkfish stuffed with tomatoes and onions, wrapped in banana leaf and steamed.

The name of the restaurant was also a mystery, but Maniago explained that the Mekeni are an ethnic group from the Luzon area, famed for their culinary skills, and Lutong Mekeni means, “cooked by a Mekeni.”

For the past few weeks, Lutong Mekeni has been open on Saturdays only, with very limited hours, but starting soon, they will be open five days a week. Be sure to check their Facebook page for updates. Wednesdays through Fridays, (but not yet) you’ll be able to order off of an a la carte menu, while on Saturdays, they’ll offer combo dishes from a steam table: any two entrees, plus rice for $8.75. And on Sundays, as soon as their kitchen is finished, they’ll offer an all-you-can-eat buffet, including whole roast pig for $15.