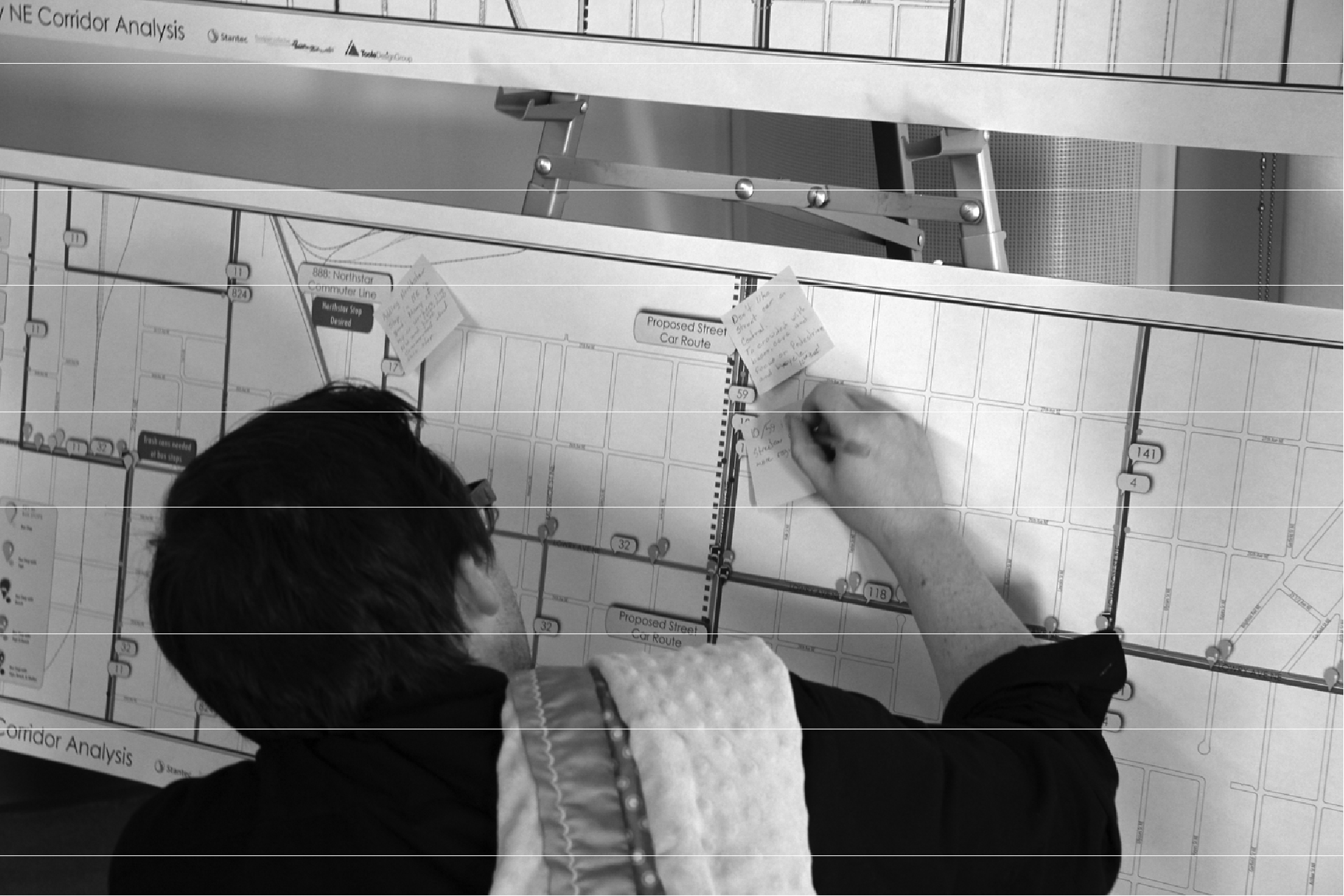 Community members lined up to view proposals for improvements to Lowry Avenue. Attendees were encouraged to write all over the poster boards with their criticisms and ideas on sticky notes. (Photos by Alex Schlee)

Piece by piece, Lowry Avenue is changing. The highly-used corridor that spans Minneapolis has undergone transformation after transformation, yet Northeast from Marshall Street to Stinson Boulevard has not been touched. First, the section running through North Minneapolis underwent a massive overhaul, and then the bridge followed, replaced by the archway seen today. Originally, the renovations in North were intended to extend into Northeast, but construction on the bridge halted the project. Starting in January of this year, attention turned to one of Northeast’s busiest roads.

Funded by Hennepin County, in conjunction with the City of Minneapolis, the Minnesota Department of Transportation, the Minneapolis Parks and Recreation Board, and Metro Transit, a facelift for Lowry has been a long time coming, over fifteen years by Hennepin County Commissioner Linda Higgins’ estimation. She said $300,000 were set aside to fund the planning phase, running from this past January until late October. Past the planning, however, funding has yet to be drawn up. A proposal must be finalized before further funding to back the actual construction phase can be granted.

Though she is eager to get this show on the road, Higgins and members of the Minneapolis City Council have yet to favor any specific plans for construction. The County is waiting to begin the project until a proposal emerges with community support. An event was held on Wednesday, June 11 where community members who would be most affected by the oncoming changes to the avenue could offer their input and criticism of the project.

A meeting held in February established what sort of changes people of the neighborhood would like to see. Consultants drew up proposals based on recommendations from that meeting and other contacts, and presented on the 11th in several separate exhibits. In the open house format, guests could come and go as they please, offering their own ideas and changes where they saw fit to each exhibit, and even drawing up their own entire proposals in places using ideas and alternatives presented.

Most of the different alternatives exhibited work with existing space along the busy road. The most common concerns address traffic congestion, narrow sidewalks and poor bus service along the thoroughfare. Changes across the bridge involved buying up land along the road and using it in the development, but here, community members want to see the space already available put to good use without cutting into the lots lining the sidewalk.

“I didn’t have the stomach to just buy all the properties and demolish them, so we’re working mostly on the street,” said Higgins.

Thus far, a lot of the work that needs to be done centers around some of Lowry’s busiest intersections, specifically across Central Avenue, University Avenue, Marshall Street, and several smaller intersections in between. According to an exhibit presented by John Hagen, a traffic engineer with Stantec, a design firm advising on the project, these intersections have the highest rate of crashes along Lowry, and pose problems for traffic flow, especially around University, where truck traffic is often heavy.

Some of the most popular solutions discussed have included removing parking along the roadside and reducing the number of lanes in the road from four to three, one in each direction, and a third as a center turning lane to make left turns easier and safer for commuters. Other propositions presented at the open house’s many exhibits included the widening of the route’s narrow sidewalks to better accommodate pedestrians, and the possibility of adding a bike lane. Some attendees balked at the latter idea as lacking the room needed for these specific uses. 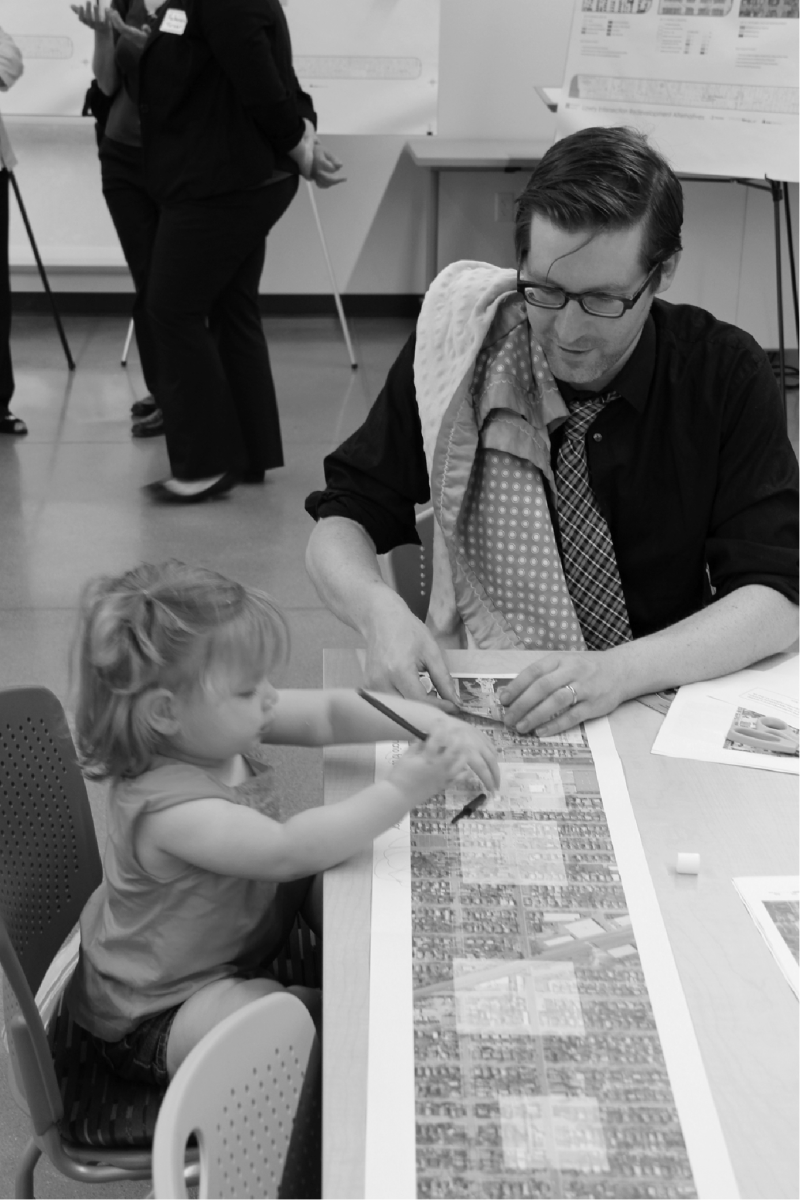 Left: Her father said the little girl was “doing great, she’s putting playgrounds all over.”

In the end, the county is still willing to purchase property when they need to, especially around the troubled intersections. To make room for larger vehicles like the semi-trucks that frequent University, several propositions involve widening or moving the road, which would mean an intrusion on lots where businesses and residences are currently located. For the time being, no specific action has been selected by the public.

“At this point, we don’t know what the level of impact is,” said Hagen.

Many variables exist along the length of Lowry in question, whether they be parking restrictions, speed limit changes, or variations in the width of the road, which is why planners value public opinion. The assorted propositions were all suggested by community members, and with more open-house meetings like this, the collection of ideas will be narrowed down to a solution pieced together by people who actually drive, walk, and bike the length of Lowry daily.

“Selfishly, I just want a better road to drive on,” said one Tomi Bean, a regular commuter down the length of Lowry who not only wants to see the road improved for utilitarian purposes, but also wants to do her part to improve the neighborhood. “But thinking forward, I like that I’m contributing to the big plan.”

The planning phase of the project is set to be finished in late October of this year. Contributed ideas will be ultimately decided upon by the Hennepin County board on recommendation from the district’s commissioner Higgins, and the Minneapolis City Council. Any community members wanting to contribute between meetings are encouraged to contact the project manager, Carol Anderson, through the e-mail LowryAveCW@ hennepin.us, phone 612-348-9260.