The vacancy rate rose slightly to 2.8 percent — below the “balanced” rate of 5 percent –– since last quarter, but the low rate is contributing to continual rent increases, according to a report released in early March by the Minnesota Housing Partnership.

“Minnesota has the worst renter affordability for low-wage workers out of any state in the Midwest,” said Leigh Rosenberg, MHP research and outreach manager. 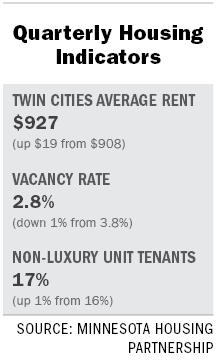 Average rent in the Twin Cities rose to $927, according to MHP’s report on current housing trends.

Rental units are in high demand and low supply, the report said, which has caused an increase in average rent for the past six quarters that is likely to keep rising.

Marcy Park Apartments in the Marcy-Holmes neighborhood, for example, has zero vacancies among its 59 units, said Michelle Mandaville, the apartment’s property manager.

Rent has increased there for three years, she said.

University of Minnesota student Jeffrey Thorstad said he moved to Marcy Park Apartments in August and preferred paying a higher rent over living in the dorms.

“I wanted to have my own place,” he said. “I had an opportunity to move in with some friends, and that definitely helped out with my decision.”

The sophomore mortuary science student said it was a good location because it’s close to the University and Interstate 35W.

Thorstad and his two roommates each pay $600 in monthly rent, he said.

“The places that rent the quickest this year were the larger units that have more people living together as a family group,” said Tim Harmsen, owner of Dinkytown Rentals. “Instead of one and two bedroom apartments, they want six and seven bedroom houses.”

The more people living in the same unit, the easier it is to manage expenses, he said.

Of the 700 bedrooms in the Dinkytown area that Harmsen owns, he said about 50 are currently vacant.

Tenants are out of money, he said, and price is going to play a bigger role than it did in the past.

“They don’t want to be nickel-and-dimed,” he said. “They’d rather have one price that includes everything than a bunch of prices that add up to a lot.”

As the average rent rises in the Twin Cities, homelessness has increased. The MHP report shows the number of families per month seeking shelter in Hennepin County has doubled since 2006.

Currently, the Senate has proposed $36 million to address housing and homelessness, while the governor has proposed $32 million and the House $15 million.

“The bonding package that we are promoting is something that would help to address some of the trends that we see in this [housing] report,” she said.

“This report continues to show us why the bonding bill is a really good idea for housing.”