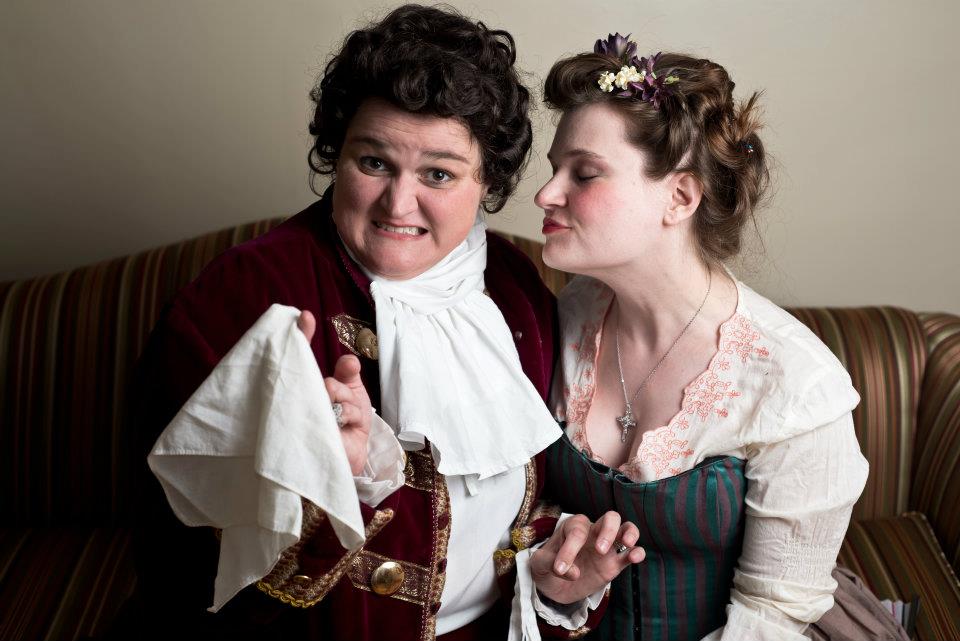 Theatre Pro Rata delves into the land of farce for their latest production, Lovers & Executioners, a play adapted from a play called The Wife, Judge and Accuser by Antoine Jacob de Montfleury, who was a contemporary of Moliere. For the most part, it’s a very fun production with a cast of very capable comedic actors and actresses.

The premise of the show is that Julie (Noë Tallen) has been condemned to die, by her husband Bernard (Andy Chambers), for supposedly cheating on him. He leaves her on an island, assuming she’ll starve to death—but lo and behold, she returns years later, disguised as a man named Frederic, who soon becomes Bernard’s chief rival.

As director Carin Bratlie points out in the program, there are all kinds of issues of homophobia and male chauvinism in the script. I’m sure it was just hilarious to the original Restoration audience to see a woman dressed as a man wooing a woman, and then being called a homosexual slur of the time. Today, we don’t think that’s funny, but at the same time, there’s almost a kind of double humor that happens, that Bratlie embraces—of revealing the at times bigoted nature of the source material and finding humor in how silly that is.

The stars of the show are the costumes, designed by company member Mandi Johnson. Detailed, elaborate, and full of creativity, the costumes both suggest the period and also take incredible artistic license with color and pattern. The trippy stockings, colorful shoes, brightly colored wigs, and an assemblage of patchwork and pastel colors really makes a show that’s lovely to look at.

John Strand’s adaptation of Montfleury’s play, too, is very modern, while keeping with the rhymed couplets. He throws in anachristics sayings that are funny and  keep the action very present.

As far as performances go, the women of this production particularly shine. Amber Bjork is hilarious as the rather ditsy Constance. Her performance is rather bird like as she flits about the stage, sometimes turning in circles as if she has forgotten to stop.

Noë Tallen is also quite charming as the cross-dressing Julie/Frederick. Tallen has an infectious laugh and is very convincing as a man, but plays the dual and conflicting parts of her character very well. It’s also fun to see the unrequited love subplot between Julie and her servant Octavius (played by Tallen’s real-life husband Ben Tallen).

Carin Bratlie has a sure hand in the direction: the blocking is very crisp and clean, and aids the comedy and action well. Unfortunately, I thought the production got a little too serious at the end. I could see where Bratlie was trying to go with it, perhaps making a connection with our modern justice system where people still today are sentenced to death who may be innocent, but for me, I thought the shift toward seriousness bogged the show down a bit, and I would have liked to see the ending played with a lighter touch.

I also didn’t like the set, designed by Julia Carlis, quite as much as the costumes—it doesn’t have the same wild ingenuity, although I was fascinated by the working fountain that acts also as a sound effect throughout the production.

Overall, it’s definitely a show worth attending, especially if you are in the mood for a little escapism and fun.

The Theater All Year program is run independently of the Daily Planet’s editorial coverage, and participation in the program does not affect the likelihood or content of any Daily Planet previews or reviews. Coverage of issues and events affecting Central Corridor communities is funded in part by a grant from the Central Corridor Funders Collaborative.