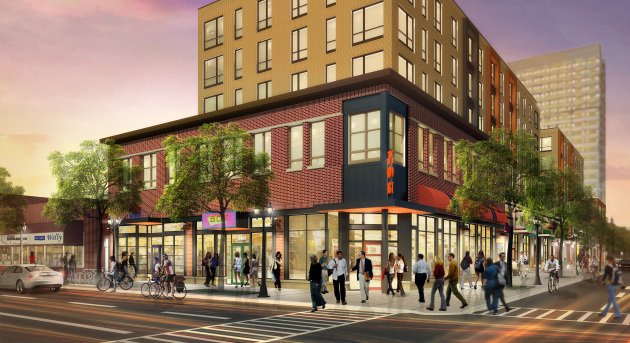 Planned development seen from the corner view of 14th Avenue and Fifth Street, where the House of Hanson stands today.

The Minneapolis City Council on August 2 rezoned a portion of Dinkytown to pave the way for a mixed-use apartment and commercial building that displaces the House of Hanson and other long-time businesses on Fifth Street Southeast between 13th and 14th avenues.

After the council meeting, a teary-eyed Laurel Hanson Bauer said her 82-year-old business, the House of Hanson grocery store, would close after this weekend—assuming her negotiations with Opus Development go as planned.

Her nemesis on the issue, Kristen Eide-Tollefson, owner of the Book House, which has moved after eviction from Hanson’s building, was philosophical about the loss, saying her opposition Save Dinkytown movement stimulated an important discussion among City Council members on development, density, and planning in the city.

The victor, Opus Development, could begin construction on its six-story 140-unit apartment building as early as next month and complete it a year later, the Star Tribune reported.

Pat Duffy, who owns Duffy’s Pizza and manages the adjacent parking lots, says he’s closed the pizza business but he will keep the parking lot open.

“We’ll keep it open just as long as we can, probably until the bulldozers show up,” he said. Appearing enthusiastic about the sale, he said, he has begun discussing the possibility of opening his pizza business in the new Opus building when “Dinkytown will be a vibrant business district again.”

“With customers,” added his wife, Susan Duffy. She originally bought their property, which includes five rental units in two old Victorian homes, in 1996.

“It was zoned R5 when I purchased it in October 1996,” she said, adding that category allowed much higher density than the current C1 business zoning that the City Council changed to C3A for mixed residential and commercial use.

“Dinkytown has been my life,” Susan Duffy said. “It’s the only place I’ve ever worked.”

Bauer said she started working for her father 44 years ago when she was 12 years old. “I worked for free at first, but later he paid $1 an hour. The minimum wage was $1.10. My friend who worked at the Varsity Theater made $1.10,” she said.

Bauer has owned the business herself since she purchased it from her dad in 1997. He made more money 10 years ago than she made last month, she said, adding that her small corner store is no longer viable with competition from CVS and a new larger grocery store under construction.

Eide-Tollefson said she has had to radically change her business plan because her current store has one-third the space she had in the Hanson building. She moved 50,000 volumes out of storage in the UTEC building when it was torn down and then she moved 80,000 volumes out of her old store.

“But I’m happy to be in Dinkytown,” she said, adding that she continues to look for more space. She has books stored in several locations, and they are easily paged from her location on the second floor of Dinkydale, 1316 Fourth St. S.E.

Third Ward City Council Member Diane Hofstede, who represents the neighborhood, tried to block the rezoning. The zoning and planning committee had voted against the rezoning a week earlier, and the Council vote was a rare rejection of a committee recommendation.

In discussing her motion, Hofstede proposed a moratorium on development in Dinkytown until a small-area plan is completed.

After the meeting, however, Hostede said she was uncertain about whether she would push for a moratorium on future development.

Save Dinkytown leaders said another developer has already purchased options on other Dinkytown properties, including buildings across Fourth Street Southeast from Dinkydale, the new home of the Book House.

They had predicted that Opus would be only the first of a series of rezoning requests that could spell the doom of the small-business nature of Dinkytown and other Minneapolis activity centers.

Hofstede said she “sensed a great deal of student involvement in this issue, mostly by email.” She said she didn’t have a count but the number of her emails on the subject was in the hundreds—much higher student participation than on other issues.

“Students—whether for or against this project—recognized and want to preserve the character and uniqueness of Dinkytown,” Hofstede said.

Presenting the report of the zoning and planning committee that he chairs, Council Member Gary Schiff moved to approve the rezoning—contrary to his committee’s recommendation. Hofstede then offered a substitute motion to reject the rezoning proposal.

Schiff said the Opus proposal received unanimous endorsement of the planning commission and meets the city’s planning policies. It provides housing for students, hidden below-ground parking and an opportunity to live near the University of Minnesota. “The project has gone through a lot of neighborhood debate,” Schiff said. The neighbors should have a long-term plan for Dinkytown by the end of the year, but this project is already under way. He predicted that the living conditions would foster a sense of community and improve student grades.

Hofstede said approval should wait for the results of the small-area plan, which could be completed in October.

“This is really a critical issue, not just for Dinkytown but for each and every one in the city of Minneapolis because it goes to the core of who we are in the city,” Hofstede said.

The Marcy-Holmes neighborhood plan adopted by the city, she said, calls for four-story, not six-story buildings, she said. Both Dinkytown and Marcy-Holmes Neighborhood are working on new plans.

Council Member Meg Tuthill said the city has allowed other neighborhoods to stop developments while they work on plans.

“The fact that this neighborhood is in the middle of a small-area plan is really important to me,” Tuthill said. “We could see whether other investors in the area could handle the guidelines that are proposed.”

“This issue has started a very interesting conversation about development, about density, and about the character of neighborhoods,” she said. “I’ve received contact from people, including a lot of contact from Eighth Ward residents. This speaks to the influence of the University of Minnesota and the Dinkytown area that so many of us who live in the city have a connection with Dinkytown. So many of us have even lived in that area or attended the University.”

First Ward Council Member Kevin Reich said developing this site would not affect the historic aspects of Dinkytown. “This site is not a charmer. The amount of surface parking lot is the defining characteristic of the property—and not a pretty one at that.”

Reich said his constituents in the Southeast Como area want the Dinkytown development to relieve the pressure for more student rental housing in their neighborhood.

City Council President Barbara Johnson called the Opus proposal “a lovely development. It’s a beautiful building” in a neighborhood where students are being crowded into less than desirable housing. “We see the building of great big cracker boxes with 16 students in a house. This is quality construction where there is [only] parking now,” Johnson said.

The council also rezoned nearby property from R5 to R6 for higher residential density. This change involves 17 parcels on Seventh Street Southeast between 14th and 15th avenues to permit the construction of another six-story apartment building. The vote was 12-1 with Tuthill opposed.

Read more about development in Dinkytown