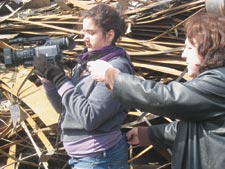 Sixteen years ago, Barbara Wiener supported a friend through a grueling, 40-hour labor. When a baby girl was finally born, Wiener was inspired. “I remember holding her and promising to make growing up for her easier,” Wiener recalled.

Wiener was working in film at the time, and approached her boss about the idea of creating a media outlet produced by and for girls. He quashed the notion that anybody would be interested in girls’ media, and Wiener remembers thinking, “That can’t be right.”

Undeterred, Wiener reached out to professionals in both media and youth development. This collaboration eventually led to TVbyGIRLS, a nonprofit organization established in 2004 that inspires girls to develop their leadership potential, cross-cultural understanding and collaborative skills to create compassionate change in the world through media arts.

Wiener, founder and executive director of TVbyGIRLS, has never stopped experiencing the inspiration she felt holding that baby girl so many years ago. “These girls fill me with hope all the time,” she said. “I am amazed at how wise these girls are,” especially when they are in a safe place, aren’t competing with each other and have mentors to work with, Wiener continued.

TVbyGIRLS reaches out to girls in two ways. Wiener and her staff of two conduct workshops at schools and community organizations to teach media-making skills to girls ages 12 to 20. They also conduct mentoring groups that work together over several years on projects that have more depth and complexity.

The goal, Wiener explained, is to create a safe space where girls can talk about what is happening in their lives and share their stories. “We can be told that we matter … but it’s not until we actually take it outside to our own community and get a response to it that we really believe it.”

Too often, the messages popular media sends to girls are defeating, Wiener believes. “Adolescents are looking out into the world for cues … and don’t like what they see,” Wiener said. These images are often sexualized, violent and focus on the worst aspects of ourselves, she continued. “I don’t believe that’s what girls want.”

Emily Lahyani, an 18-year-old member of TVbyGIRLS, would agree. She joined the group because it combines two of her favorite things, she said-women’s issues and film. Besides learning the basics of operating heavy-duty cameras, Lahyani said interviewing people has also taught her some social lessons. “I’ve been stepping out of my shell a bit,” she said.

A film about love

Members of the group meet once weekly for two to four hours at a time, Lahyani explained. That dedicated effort has resulted in more than 90 films that attempt to counteract the negative images often seen in mainstream media. TVbyGIRLS most recent project, “Love,” examines love from a variety of perspectives. It is the group’s first hour-long special and a public screening will be held in February.

The first part of the film, comprised primarily of playground interviews with younger girls, explores new love and the ideas we develop from Disney movies and other sources. Next, the film delves into what happens once we think we are in love. Fear happens, Wiener said, and scenes of dance and spoken-word poetry unearth what girls are afraid of.

The film then examines the transition that takes place when girls overcome their hesitation about love and begin to fall in love with specific people. Girls learn about the history of courtship and modern dating rules and expectations, ultimately deciding that there are no formulas and that love is theirs to create. Finally, commitment is explored as girls grapple with what that looks like and how to make that choice. Interviews with the girls’ parents about their own committed relationships comprise this last section.

Love is a universal topic, Wiener said as she explained the subject of this latest project, and teenage girls are endlessly interested in it. “They came to the conclusion that love is about connecting in respectful ways … and is a driving possibility for everyone,” Wiener said.

To view profiles of the girls involved in TVbyGIRLS and to watch videos of their projects, visit www.tvbygirls.com. Other websites that feature their films are the TVbyGIRLS youtube channel and TVbyGIRLS on Vimeo.