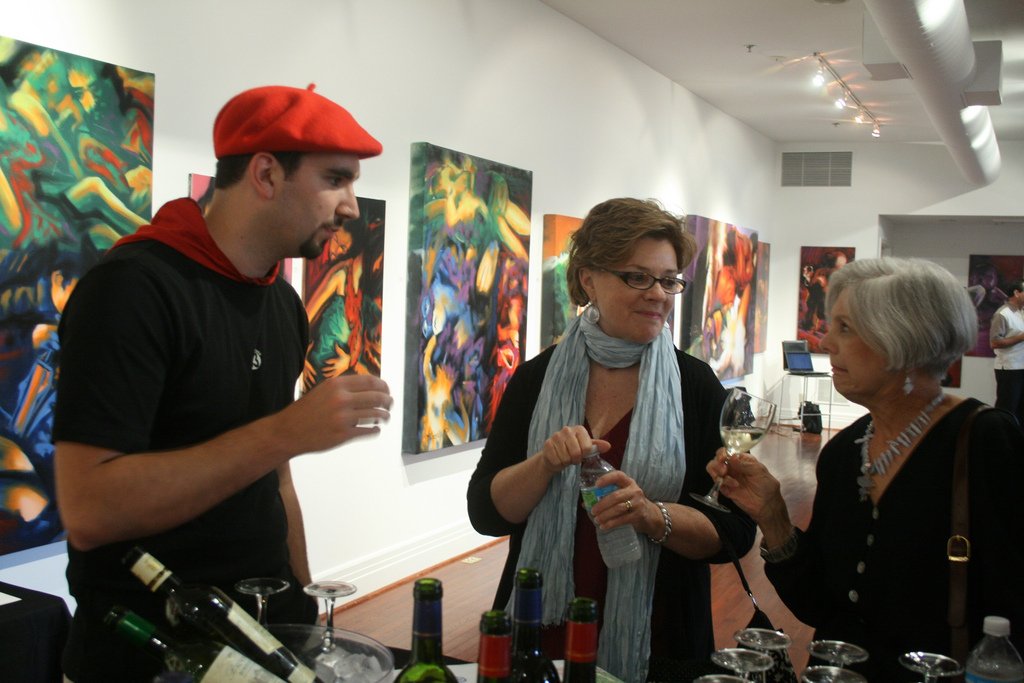 A few weeks ago I posted a status on Facebook about how I really don’t like it when art galleries feature extremely loud music at their shows. I didn’t expect this opinion to be well liked and was surprised when friends of mine began commenting and ‘liking’ the post which suggested that they agreed and understood my sentiment. I honestly thought I would get more testy replies as I was really just ranting, but it gave me a chance to ponder why this is something that is so impactful and therefore important to the viewing of artwork.

I go to shows regularly, not all the time, but regularly. I generally leave every show having met with many nice people and seen some lovely art; rarely do I leave with any pet peeves or negativity to speak of. But incredibly loud music is the one thing that is guaranteed to prevent me from enjoying an art show to the fullest.

Music at an art show is generally a great thing when it’s at reasonable volume; it adds to the atmosphere and can enhance the overall theme of the show. But when it’s too loud it goes from being an inspiring soundtrack to an unnecessary distraction that makes it very difficult to focus on the artwork and the personal reflection and conversation involved in enjoying art. It gets exhausting having to yell and be yelled at in order to have a normal conversation with someone especially when your head hurts as the music is giving you some sort of a brain seizure.

I have seen art shows turn into inappropriate dance parties at the blink of an eye because the music sent the message that it was okay to wildly thrash about surrounded by expensive artwork that artists put a lot of time into creating and probably don’t want knocked down by a twitchy mob. I actually got pushed once at an art show because some obnoxious raver was so into the music that she forgot there were other people around that had no interest in turning the gallery into a nightclub.

Now, there is a flip side to all of this, as there is with most things. Loud or overly aggressive music at concerts, bars, night clubs, and parties is accepted and expected, but art shows provide this strange middle ground where music creates potential but can diminish it as well. Bringing live music into an art show can generate a wider crowd; people who may not have come otherwise if their favorite act wasn’t playing. This allows for exposure for not only the artists involved (musically and visually) but for the audience themselves who get to see new art or get to hear a new sound. While I have left exhibitions an hour and a half early because of the noise vibrating from the speakers, I’ve also been to shows where a great band played a great set that was short and sweet, allowing me to appreciate both the music and the artwork. Art shows can get stale and boring and having another element to draw people in can provide a true sensory experience for everyone in attendance.

There is a lot of room for discussion in this area, it wouldn’t be a world shattering discussion but it would be cool to hear what people think. There is a funny middle ground here and even though I’m more against loud music than for it in this case I think there is plenty of room for compromise.