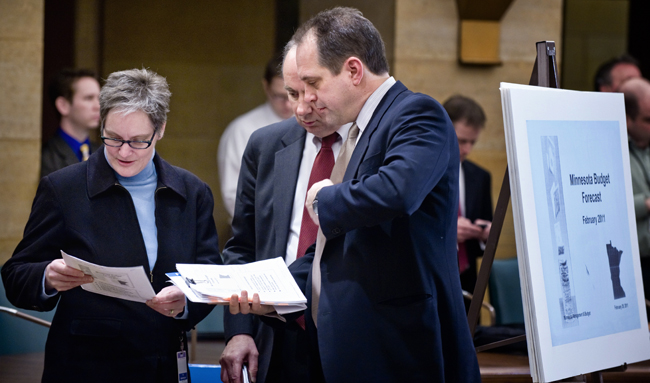 It’s not hard to find good news in the state’s February Economic Forecast. The state’s biennial budget deficit has dropped by more than $1 billion down to $5.03 billion, according to its projections. And the economy is set to grow at a faster rate than had been expected, potentially accelerating the sluggish growth in the state’s job market.

But thumbing through the 86-page document, one also finds cause for alarm. The improvements are due largely to fleeting federal stimulus; global turmoil threatens to erase the economic gains; and whatever lawmakers do to solve the remaining budget gap will likely make the state’s problems even worse.

For lawmakers, it all adds up to a sticky situation.

“You can see that we’re not real certain about anything here,” State Economist Tom Stinson told members of the House Taxes Committee March 2.

The forecast, released twice each year by Minnesota Management & Budget, is the definitive document lawmakers use to put together the state’s biennial budget. It represents economists’ best guess about what’s going to happen to the state’s economy over the next two to four years.

This year’s February report shows Minnesota in a state of transition, with a slowly improving economy, but still facing fallout from the worst economic crisis in decades.

The state’s slow-but-sure economic recovery promises to help ease budget pressures, but not by much. In fact, most of the $984 million revenue boost predicted in the forecast comes not from a surging economy, but from a temporary stimulus package of tax cuts passed by Congress in December and signed by President Obama.

For legislators, the news that the state’s deficit had dropped from $6.19 billion to $5.03 billion was unquestionably good. The irony of it was not lost on House Taxes Committee Chairman Greg Davids (R-Preston).

“Who would have thought that a $5 billion shortfall is actually good news?” he said.

Almost immediately after the forecast’s Feb. 28 release, Gov. Mark Dayton withdrew his proposal for a one-time income tax surcharge on the state’s highest-income residents. The temporary tax increase would have raised $918 million over the biennium. He said he would also withdraw proposed cuts to nursing homes and various other programs. 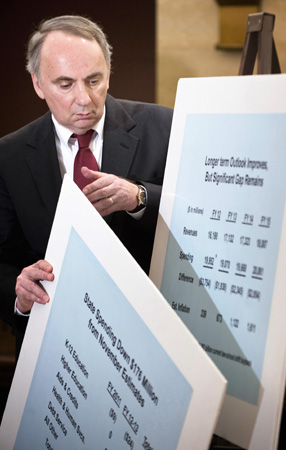 In their own reactions, Republican and DFL legislative leaders drew vastly different conclusions from the forecast. Reiterating their message of having the state “live within its means,” Republicans said they would oppose raising any new taxes. They argued the forecast proves that taxpayers’ money is better left with the taxpayers, who will use it to generate economic growth.

“When the money is left with the people who make it, earn it, invest it, they do the right thing,” said House Speaker Kurt Zellers (R-Maple Grove).

Senate Majority Leader Amy Koch (R-Buffalo) agreed, and noted that “the largest portion of this improvement in the budget had to do with what Congress did in not raising taxes.”

DFLers seized on a comment Stinson made Feb. 28 – that while tax increases and budget cuts would both hurt the economy, budget cuts would hurt it more because they would have the greater impact on consumer spending.

“Dr. Stinson is right, based on all the research. That’s why we’ve been continuing to advocate for a fair budget that doesn’t continue to squeeze middle-class families,” said House Minority Leader Paul Thissen (DFL-Mpls).

But Stinson also warned that the difference between budget cuts and tax increases wouldn’t be very big, as far as the economy is concerned.

“They’re probably both going to have a deleterious impact,” he said.

Lots of things could still go wrong with the economic recovery, but at the

March 1 meeting of the House Ways and Means Committee, the ones that seemed to be on most lawmakers’ minds were the price of oil and the unemployment rate.

According to Stinson, unrest in Libya, Egypt and other Middle Eastern nations threatens to raise the price of oil and gasoline, which he said could diminish or even erase whatever stimulus the December tax package provided.

“I think this situation is going to be a while before it plays itself out, and clearly we’re not going to see the cost of oil going lower anytime soon,” he said.

Stinson said an increase of $10 per barrel of oil over a period of one year would cost the United States 250,000 jobs and slow economic growth from

3.2 percent to 2.7 percent of gross domestic product. He predicted that if oil prices were to rise to $126 per barrel for a year, it would fully negate the impact of the December stimulus package. Crude oil topped $102 per barrel March 2, the highest amount since September 2008.

Whether such a scenario comes to pass, the state’s employment situation will likely remain troublesome. As of December 2010 there were roughly 206,000 Minnesotans looking for work who couldn’t find it. Stinson said the state won’t regain its pre-recession employment levels until 2013.

When jobs do start opening up, Stinson said many of them – up to two-thirds, in some employment sectors – will be to fill positions left vacant by retiring baby boomers.

“That’s one reason State Demographer Tom Gillaspy and I are more optimistic than the national forecasters about what’s going to happen to the unemployment rate,” he said.