The LRT through southwest Minneapolis is coming ever closer to a final route. A route not through Uptown. On October 14 the Southwest Policy Advisory Committee took a vote and approved option 3A (Kenilworth Alignment: North Minneapolis, Van White, St. Louis Park) as recommended by the Technical Advisory Committee (TAC). That recommendation was passed on to the Hennepin County Regional Railroad Authority (HCRRA). 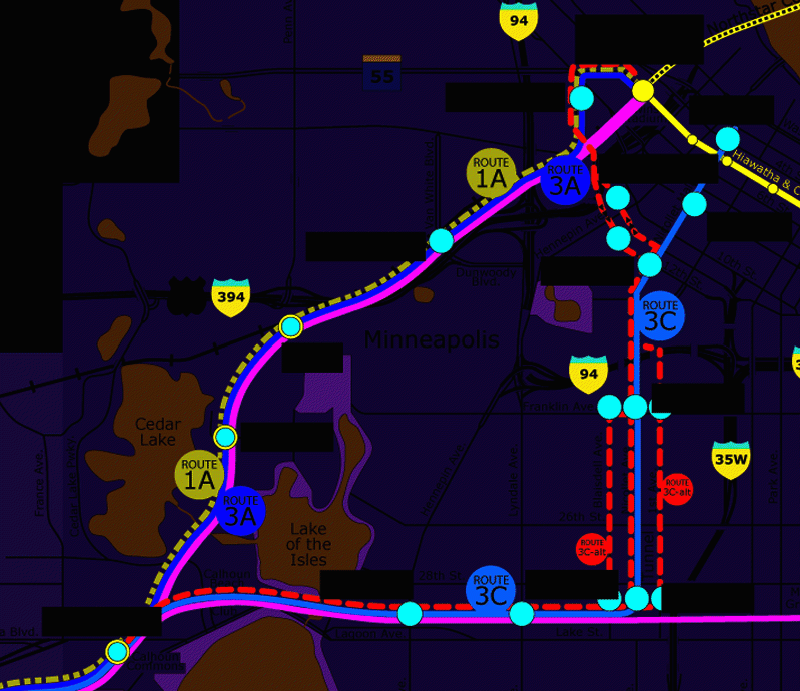 On October 20 the HCRRA held a public hearing at the Government Center in downtown Minneapolis for citizen response. In an hour and a half of three minute responses, only four people spoke in support of the Uptown alignment.

This meeting was less animated than the September 17 meeting at the Eisenhower Community Center in Hopkins where attendants periodically applauded speakers. but at the Minneapolis meeting almost no one spoke over the allotted three  minute length. There was no delinquent applause and the audience was only about one quarter the size of the previous hearing. And the support for the Uptown option by percentage was even less.

The majority of speakers repeated arguments made not only in the study submitted by the TAC but also used some of their own.

Tim Springer, Executive Director of the Midtown Greenway Coalition, suggested that the 3A option was consistent with the Midtown Alignment, (a 3A choice would mean that potentially a streetcar could run along the Greenway between the Southwest and Hiawatha lines. Formal language requiring Streetcar implementation was requested by City Council Member Remington but failed and was substituted with a more general request in the PAC’s Resolution Amendment #3, see Resolution, page 6)

In the minority representing the 3C alignment through Uptown, the arguments not only questioned the validity of the TAC study but also the requirements of Federal Government Funding.

Art Higinbotham, Board Chair of the Cedar Isles Dean Neighborhood, in favor of the Uptown route, questioned the ridership estimates and travel times of the TAC study and requested an “objective evaluation.” He added that the Kenilworth option only serves the suburbs.

Uptown resident, Cameron Slick came at the debate from yet another angle. “3A sets a terrible precedent.” Using the 3A option as an example he explained how future routes like the Bottineau Line would serve only suburbs by only using existing rail line rather than streets. And he added that the representation on the PAC was flawed because only 2 of the 12 members on the Committee were Minneapolis Council Members, (Ralph Remington, Ward 10 and Robert Lilligren, Ward 6.)

Only one more public hearing is left. At a date in the near future as yet to be determined, the Met Council will hold a meeting that will be followed by the last opportunity for citizen response.

Bruce Cochran is Art Director in charge of production for the Uptown Neighborhood News, lives in CARAG and is glad there will finally be a real train that he can use to solve his math story problems.