Angelspit. Photos by Trang Do.

With all the mainstream attention electronic music is getting these days, it was exciting to see Lords of Acid, legends of underground techno, play Ground Zero last Saturday night—allowing a younger generation to see that one needn’t jump out of an egg to put on a fantastic show.

A diverse crowd of dark music aficionados gathered over the course of the evening, beginning at six—a coterie ranging in age from barely old enough to get into the club to people in their sixties, dressed to the nines á la fetish, trans, goth, and steampunk. One girl in particular—a blond pigtailed teenager in a short skirt with a teddy bear backpack who looked like she just stepped out of a Ranma ½ episode—attracted a lot of attention, as did a long-haired brunette wearing cute but non-functional aviator glasses with biohazard stickers covering the lenses.

The evening commenced with Thought Thieves. A five-piece local band featuring live drums, pads, guitar, bass, and of course plenty of synth, they served up a guitar-driven New Wave sound. Lead singer Mike Johnson delivered powerful melodies in a voice reminiscent of New Order’s Bernard Sumner—especially on “All I Pretend,” a darkwave track with driving beats, in which Ariane Kokes’s postindustrial synthscape provided a perfect counterpoint to Johnson’s warm vocal presence. Unfortunately, it was still pretty early in the evening, and the crowd wasn’t quite warmed up yet-but a couple of dancers in minimal clothing, each twirling a pair of wing-like, gold-lamé-covered batons, certainly helped move things in the right direction.

Next up was Radical G, a solo dance-music act by Belgian musician Glenn Keteeler. Clad in a black jacket—bound to his body by a variety of restraints—and a leathery Nosferatu mask, Keeteler live-mixed using a laptop, sequencer, and other instruments to produce an 80s-tinged dark electronic sound very like Bauhaus and Justice. His stage presence was theatrical but subtle; he struck dramatic poses in between catchy vocal hooks. The performance was complemented by short films of him in his Nosferatu costume, which played on the movie screen to the right of the stage. Being that it was still relatively early, people didn’t seem like they were ready to dance yet—which was rather a shame, because even with its numerous visual pleasures, Radical G’s was definitely an act that lent itself better to dancing than to spellbound contemplation. A few of the dancier tracks—especially “Reason” and “Resistance in Me”—got people moving.

Angelspit was the third band of the evening—a band Wikipedia describes as “cyberpunk industrial” but what looked to me like a part-cyborg, part-dinosaur cult worshipping a sentient 1950s supercomputer that supplied the audience with enough beats, blips, and bleeps to keep them dancing all night. By this time the room had come alive. Highly energetic and original, this electropunk duo based in London and New York has found their niche touring with such legends as KMFDM, Skinny Puppy, and Front Line Assembly. Their style is aggressive and in-your-face, but overall more playful than dark—kind of like Cibo Matto on PCP, an apt comparison where front woman Amelia Tan is concerned. Adorable yet freaky in a shredded skirt and torn fishnets, her stage presence was reminiscent at times of Cibo Matto’s Miho Hatori. She and bandmate Karl Learmont, dressed as the aforementioned dinosaur, dominated the room with their over-the-top antics. But it was their surreal, intelligent lyrics that really sold me. “The money’s real, but the blood is fake!” they shout on “Fuck the Revolution.” Danger, Will Robinson.

The younger audience members looked a little awed as the members of Lords of Acid filed onstage, then launched into their first number. The drum, bass, and synth are so tight that, if you didn’t know a thing about them, you’d think they were an all-electro outfit. Not so. The Lords are a six-piece Belgian rock band founded by acid-house legend Praga Khan on synth, with Erhan Kurkun and Andre Michel Karkos (aka Virus) on guitar, Murv Douglas on bass, and Kirk Salvador on drums. The sixth spot has been occupied by several female vocalists over the past 22 years: currently Chicagoan DJ Mea. After the opening number, Mea took the stage wearing a flouncy white jumpsuit, fishnets, blonde pigtails, and a rudimentary pink top hat Humbert Humbert would have liked very much. The Lords ran through a set of classics from their decades-spanning career: some led by Mea, some instrumental.

What made this one of the best concerts I’ve seen in some time was the deep interest the band clearly showed in the audience, with the musicians frequently crossing from one side of the stage to the other, gauging the vibe. And of course there was plenty of audience participation-with lots of female energy focused on the person of DJ Mea: girls reaching out, grabbing her hand, stroking those torturous shoes. The ladies were, in turn, rewarded for their adoration by being brought up on stage during “Pussy” and “Spank My Booty”: in fact, a pretty woman who looked very much like our own Samantha Rei Crossland, proprietress of Blasphemina’s Closet, was one of the ladies who went up during the latter number, resplendent in lacy black déshabille with plenty of décolletage.

The whole evening was organized by Kilted Farmer Koncerts, a local dark/synth music promoting company that promises to bring the Twin Cities great national acts throughout the year. Up next is Conjure One this Wednesday, featuring Rhys Fulber formerly of Delirium. The website says they’ll be bringing Frontline Assembly to town for Memorial Day weekend, so there’s more great music to come. 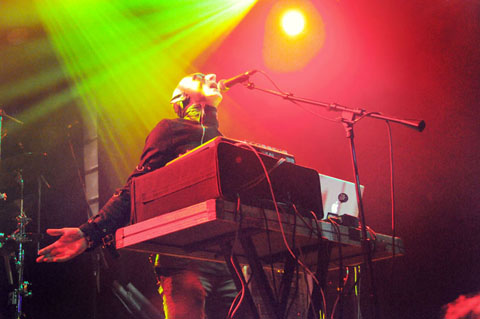 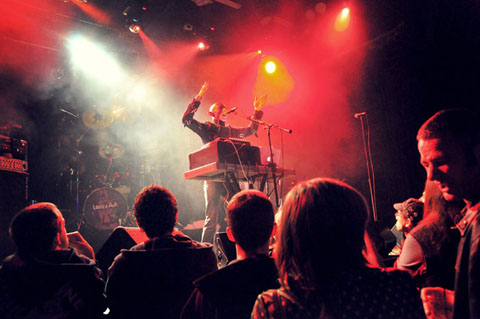 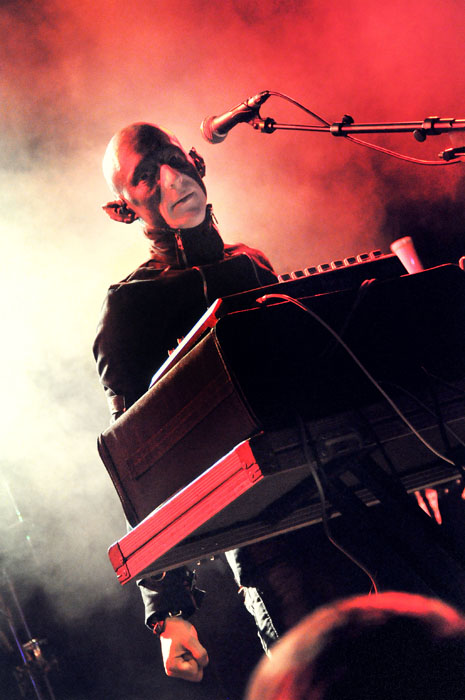 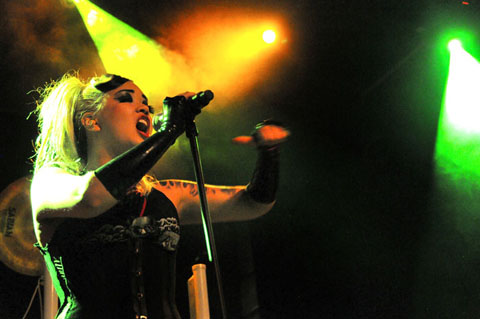 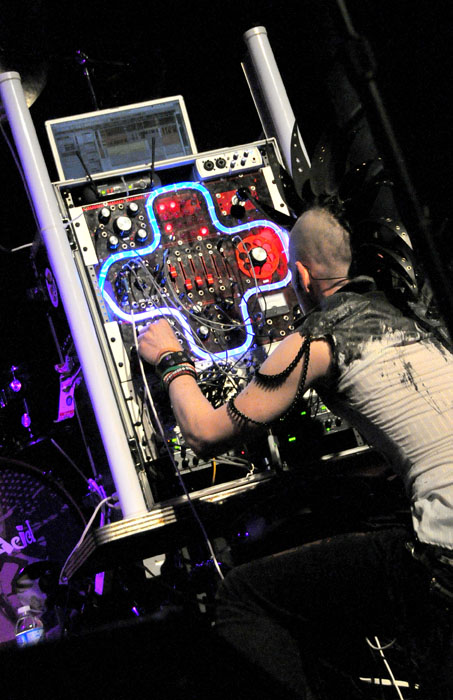 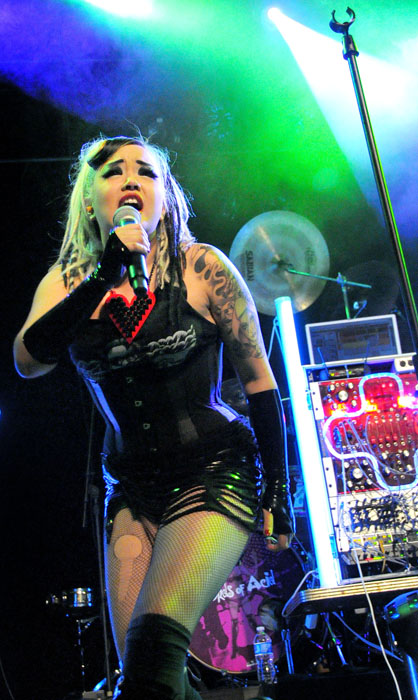 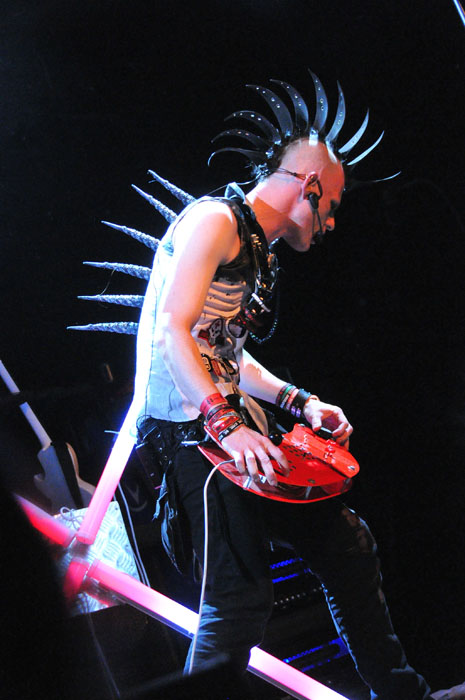 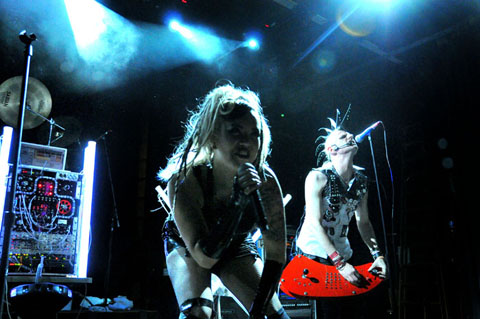 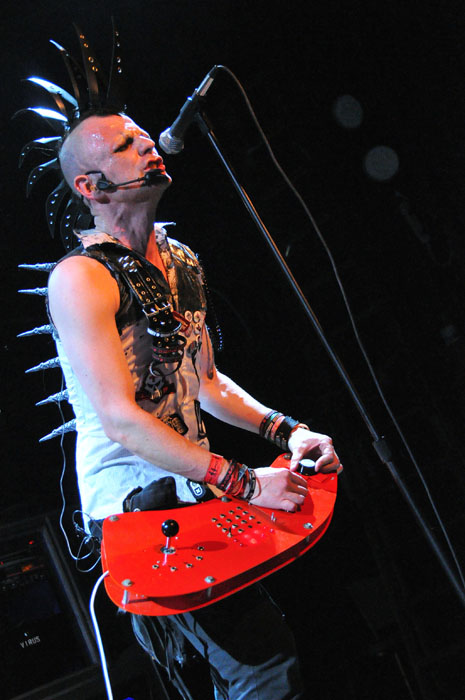 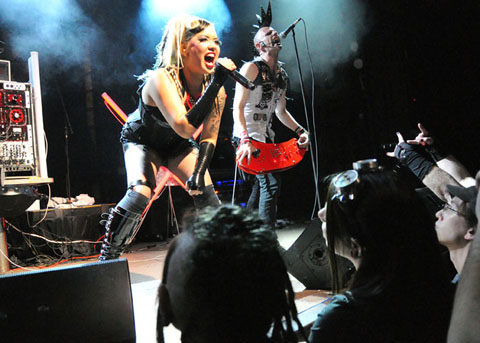 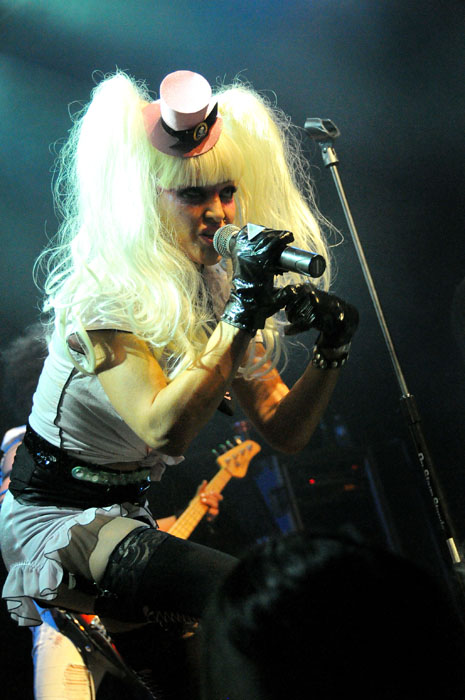 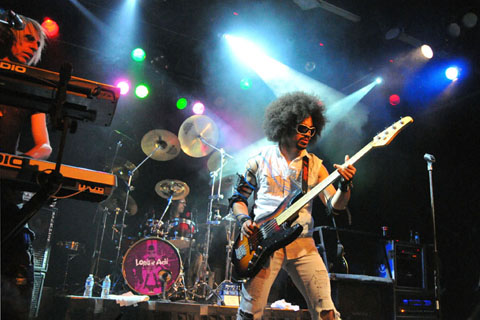 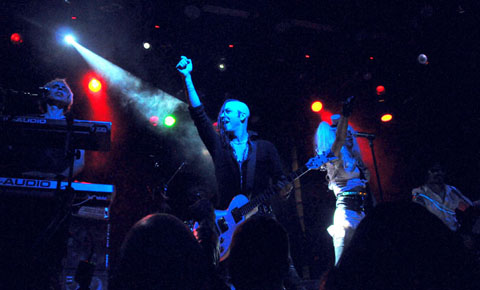 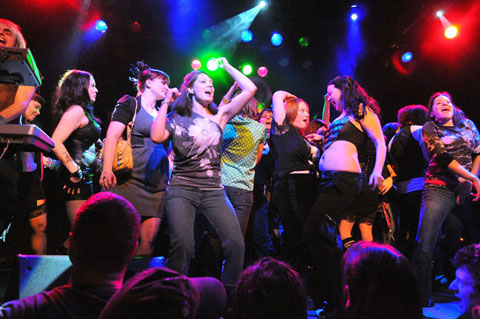