In a wide-ranging interview on February 23, new St. Paul Public School Superintendent Valeria Silva talked about the challenges facing St. Paul schools, and the strengths that the district will build on. “We have a phenomenal school district,” Silva insists. “I believe we have not marketed the good things enough.”

In her interview for the superintendent position, Silva talked about focusing on some of the “star” programs and schools, and replicating their success across the district. Asked to identify some of those star programs, she said that some schools in the district stand out as schools where parents really want to send their children.

“There is an achievement gap across the board,” she said, “but in these schools, the typical students that don’t achieve well are achieving better. There is greater parent satisfaction. There is a different culture in the building. You have a group that is working well together and is collaborating.”

Linwood: “[A few years ago] we looked at the way curriculum was delivered – it was all wrapped around the arts and the music. [The teachers and staff] were true believers. A lot of parents wanted to go there and it was a very good combination between middle class and those who qualified for free or reduced-price lunch, so that mix brought the whole group up. Then we looked at the longevity of teachers, how committed they are what kind of leaders you have.”

Linwood was a successful school by both academic and subjective measures, but nearby Monroe was struggling. In 2007, SPPS began a process of merging the two schools into what is now a dual campus Linwood Monroe Arts Plus School.

Monroe:  “When you walk into Monroe now, what a difference! You have 25 kids in a classroom, all reading, doing integrated reading with science and social studies. … Discipline has changed drastically, they’re happy.”

Minnesota Department of Education report cards confirm that academic performance has improved since the merger.

Jackson: Jackson has the first dual-language Hmong program in the country, and has developed the books and curriculum for that program. The school is full, and has a waiting list. 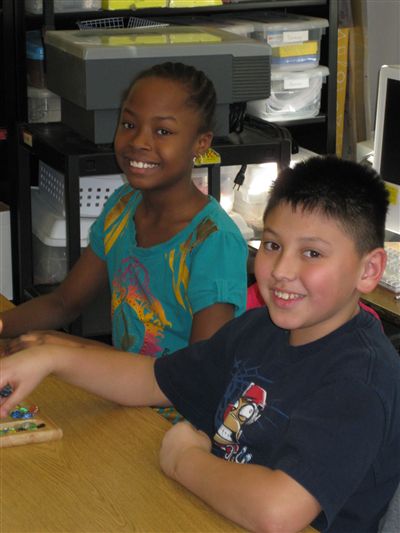 Jackson has succeeded with its African American students, too. According to Silva, African American student achievement at Jackson improved by 17 points on math tests and by 14 points on reading last year. Part of the reason, Silva says, is that principal Patrick Bryan has focused on intensive after-school programs that also involve parents and community leaders. The after-school programs include a range of activities, with Hmong Dance and STOMP Drumming and Japanese Club among the current selectoin.

Silva also characterized other programs as models that more people should know about:

Some schools are struggling. In recent years, Maxfield has been one of those schools, with seven principals in ten years and a revolving door for teachers. Immediately after Silva’s appointment as superintendent, the then-principal was removed. Now, says Silva, Maxfield has a “great, skilled and experienced” principal in Nancy Stachel, whose 17 years in SPPS include experience ranging from teacher to principal to district chief of schools.

Stachel will lead Maxfield as the school, together with Jackson, becomes the focus of a joint school district-city-county initiative to improve not only school experience but community life for neighborhood residents. St. Paul city council member Melvin Carter III is one of the main advocates of the program, which advocates say is based on the highly successful Harlem Children’s Zone in New York. St. Paul’s project may have been inspired by the Harlem Children’s Zone, but it lacks the multi-million dollar, multi-year funding that was essential to making the Children’s Zone successful.

Acknowledging the challenges, Silva insists that SPPS must not continue to look at itself as a school district with declining enrollment and funding. Instead, she says, SPPS must focus on its achievement and future as a district that offers education in different ways, redesigning and repackaging itself to offer education in new and diverse ways.

“The whole point,” says Silva, “is not lowering our standards of education for all kids. It can be done.”