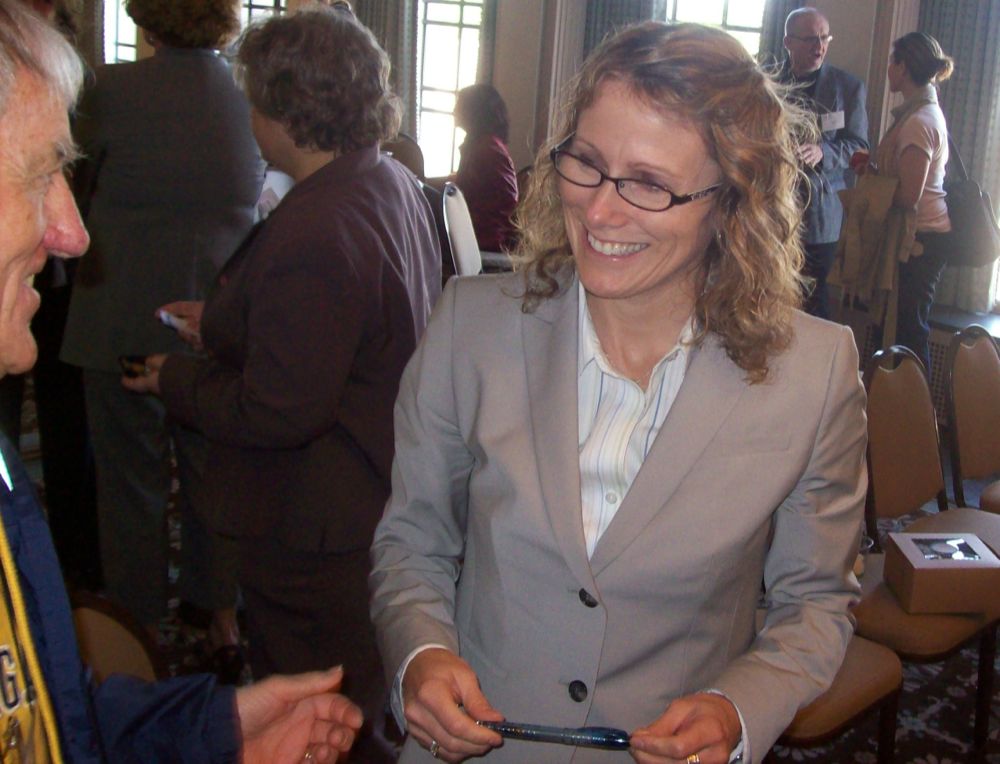 Minnesota was eighth among all U.S. states in girls’ high school athletic participation in 2010-11, according to the most recent data reported by the National Federation of State High School Associations (NFSHSA). “Minnesota in general has been on the leading edge of providing sport opportunities for all kids,” pointed out Nicole LaVoi, who is the Associate Director of the University of Minnesota Tucker Center for Research on Girls & Women in Sport.

Lavoi was one of the presenters at the Title IX at 40 National Conference at the University of Michigan in Ann Arbor May 9-11. The three-day conference’s main objective was to keep the law “on the front burner,” SHARP Center co-director and Michigan Associate Kinesiology Professor Dr. Kathy Babiak told the Daily Planet. “I think we achieved our objectives.” (SHARP is the Sports, Health and Activity Research and Policy Center for Women and Girls.)

Although girls’ participation in sports has steadily grown since Title IX was signed into law in 1972, the changes were slow to realize for some. “I was in fifth grade in 1977 right after Title IX was passed, and still there were no girls’ teams in grade school and junior high,” recalled LaVoi, a native Minnesotan, now a University of Minnesota kinesiology instructor.

Title IX “paved the way” for many women, said USA Track & Field Sports Performance Chief Benita Fitzgerald Mosley, a two-time Olympian (1980 and 1984) and an alternate in 1988.

“Sports turned me into a businesswoman,” added former softball star Jennie Finch. “I wouldn’t be the person I am without it.”

The 40-year-old federal law was a “slide through” piece of legislation attached to the 1964 Civil Rights Act, said Ohio State Sport Humanities Associate Professor Sarah Fields, one of nearly 40 presenters at the conference. A SHARP Center spokeswoman said more than 200 people were in attendance, including a local high school class. “I learned a great deal – I have so many ideas, I don’t know where to start,” says LaVoi, who was also a presenter.

Though it is widely believed to be solely for athletics, “Title IX is an anti-discrimination law,” notes attorney Arthur Bryant, Public Justice Foundation executive director.

“Title IX is about equal rights,” says University of Illinois at Chicago Economics Professor Robert Kaestner. “It is about equal distribution of resources.”

Mainstream media too often reports on the popular belief about Title IX that men’s sports have been cut because of it, says Drexel University Sport Management Professor Ellen Staurowsky. Such headlines as ‘Title IX harms men’ and ‘Title IX has gone too far’ are misleading and create “rancor,” she explains.

“Title IX has nothing to do with that. Reporters should take a critical view, or at least explore the validity of a certain statement when certain claims are made,” the professor continued. Staurowsky added that in such cases when a certain sport program is indeed eliminated, “almost 99 percent of these cases, there is a larger issue at stake beyond what’s going on [with Title IX]. … Beyond the issue of accuracy of informing the public, I think the other issue we need to be addressing is by repeating this message over and over again, we create a framework in the minds of the next generation of leaders is that this is what to expect from Title IX.”

Gender gaps remain between female and male participation – it was 70 percent when Title IX was passed, and it is between 5-20 percent today nationwide – with these gaps varying from state to state, says Princeton University visiting professor Betsey Stevenson. She noted that Minnesota historically has had one of the smallest gaps.

There has been “significant progress” over the 40 years since its passage, said Valerie Bonnette, a Title IX and gender equity specialist who pointed out that there are still schools not in full compliance of the law.

LaVoi sees such sports as lacrosse and rugby as opportunities in Minnesota high schools “for both boys and girls.” However, she fears that if school funding continues to decrease, “That affects the sports programming.”

Supporters of the federal law believe that title IX must be kept intact, and even strengthened.

“If things were fair, we wouldn’t need to have a Title IX,” concluded Women’s Sports Foundation President Laila Ali. “There is still a lot more work to do.”