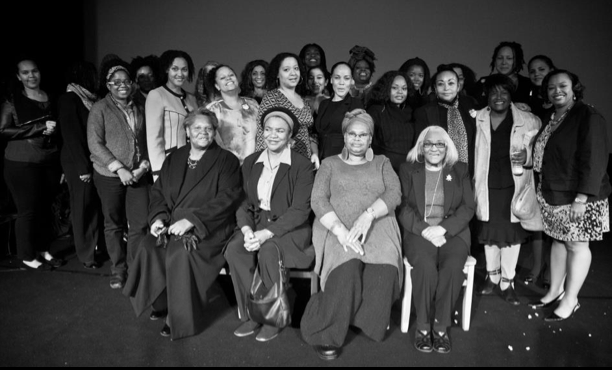 “Honor your own African American freedom fighting elders, aunties, mamas, unnamed ancestors and yourself in a special photo shoot. This is a special tribute to all of the African American women who are leading the struggle in Minnesota each and every day. As we know the time has come again for African American Freedom Fighting Sisters to stand up for voting rights once again. The “Voter ID” constitutional amendment in Minnesota is one that is specifically targeting African Americans and other marginalized cultural, economic and age demographics ”

-Call for Sistas in the Struggle for Deep Democracy photoshoot, Danielle Mkali

“The struggle recognition is the nexus of human identity and national identity, where much of the most important work of politics occurs.  African American women fully embody this struggle.” -Melissa Harris-Perry,  Sister Citizen, page 4.

According to data released by the Pew Research Center, African- American women had the highest voter turnout rates over any other key racial/ethnic/ gender demographic in the 2008 election.   In other words, in terms of percentages, the level of political participation by African American women in that recent election was higher than white men, white women, Latino men, Asian-American women, or any other group. This past week, I spent some time talking with Danielle Mkali from Mainstreet Project about black women and American democracy, following up on the “Sistas in the Struggle for Deep Democracy” photoshoot she organized in mid-October.   Danielle started our conversation by talking a bit about the voter turnout statistics.

“I think something that not many people have paid attention to – that hasn’t been headline news in many places or spaces-  but that is very important is that black women had the highest voter turnout rate of any other group in the United States in 2008… I think that’s really significant and we need to be proud of what that means for our communities, for our families, and for future generations.  We recognize the power of our vote, and we understand that’s one place that our power cannot be denied.”

For Danielle, the idea of photoshoot came as a way to recognize and honor the work that black women in particular are doing to defeat the Voter ID amendment this election as well as a way to connect this work to the legacy of struggle and resistance of black women throughout history.

“I wanted us to be able to come together in a very powerful and joyful way. It was a space for us to recognize each other, through a hug, through a smile, through “hey what have you been up to anyways, I haven’t seen you in a long time” kind of thing… In the photo you’ll see that there’s elders in there, there’s young women, there’s mothers, there’s all of us out there- not necessarily professional organizers that are working in nonprofits- its just those folks that care enough about our community to do work on this Voter ID amendment. So, it was important for me to capture us together in one space and one time because so often we are not able to come together like that.”

We also talked about the ways that the current debates over the proposed Voter ID amendment in Minnesota might be particularly relevant for black women. Danielle has been working passionately on the issue as part of the Voices for Voting Rights campaign. One thing she has encountered through this work is the ways that the narrative around a “Voter ID” or “Photo ID” covers up the intentions of this amendment and its potential impact.

“I believe that a fabricated problem [voter fraud] help justify this Voter ID legislation which was meant to directly impact marginalized communities including black voters.  We know that there are up to, sometimes, 25% of black voter don’t have a valid ID card from the government.  We also know that in a lot of places where it was going to be a tight race, black voters had a lot of power in the spaces and in those spaces.  The effort for us here in Minnesota in the fight against Voter ID is really so that we continue to hold onto that power and fight against a fabricated problem that was meant to disenfranchise black voters and other marginalized communities.”

In general, the 2008 electorate was more “diverse” both in numbers and in percentages of turnout for people of color than earlier elections.  Some have argued that current attempts to roll back voting rights (through legislative and legal attacks on early voting and same-day registration as well as more blatant attempts at voter suppression by groups like Protect the Vote) come in a context where people of color, and black women particularly, are increasingly visible as decisions-makers on Election Day.  Danielle gave some context, though, to the ways that African American women have always been key decision-makers and leaders in expanding American democracy.  While the data is only now confirming the political participation of this demographic on Election Day, Danielle argued that black women have always been powerful in shaping American political discourse and public policy.

“We’ve always been there, we’ve always had great ideas, either running our own newspapers and leading the anti- lynching movement- like Ida B. Wells- or leading slave resistance like Harriet Tubman.  A woman that I like to bring up is Jo Ann Gibson Robinson who, the night before the Montgomery boycott,  snuck into her organization and mimeographed 30,000 flyers to spread the word that no one can ride the bus anymore.  She and several other women in Montgomery, Alabama -including Rosa Parks-  were all trained as leaders.  They weren’t messing around.  They were spending weekends at Highland and leading citizenship classes. They were very practiced at this work and very political thinkers. “

Danielle ended the interview by talking about the ways American democracy would have to change if the voices and experiences of black women were at the center.  She identified that this change would require asking “what democracy means” and relearning and understanding the histories of how the country came into existence.  In other words, new kinds of storytelling about ‘America’ and who African American women are inside of it (in relation to other groups and communities, as well as in relation to the land and the environment) would be required. This storytelling, in Danielle’s analysis, would be a story of struggle and power –the same kind of story she and others are telling this year about voting rights and the Voter ID amendment.

“We’ve just always had a clear tradition of struggle: of caring for our communities and our families and caring for what’s best for all of us.  I think that because of our legacy in this country, the struggle for resistance is in our DNA.  The work I’m doing today is all about that: its about making sure that our power is acknowledged that the stories about who we are getting told.”

Hana Worku is community organizer and leader.  She is coordinating the work of the Organizing Apprenticeship Project as part of the Voices for Voting Rights campaign. Other members of the Voices for Voting Rights include: African American Leadership Forum, Be the Vote Coalition 2012, CAPI, Centro Campesino, Color the Vote, Community Action of Minneapolis, Lao Family Community, Main Street Project, Native Vote Alliance of Minnesota, Sagrado Corazón de Jesús, and Somali Action Alliance. This initiative of multiracial, multicultural organizations is focused on building community power, voice, and access at the polling booth and beyond. www.voicesforvotingrights.org