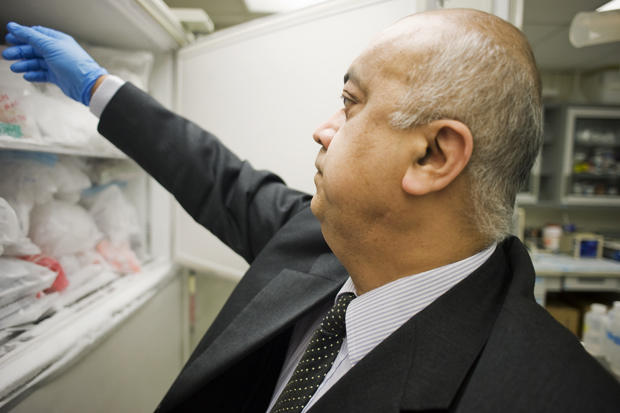 Seyyed Fatemi, a psychiatrist and researcher at the University of Minnesota, opens a freezer in Diehl Hall which contains specimens of autistic and typical brains. Fatemi and his team were the recipients of a federal grant to study neurotransmission in the autistic brain.

Dr. Seyyed Fatemi has spent the past 13 years looking at brain disorders through a microscope. But he cannot forget what he saw with his own two eyes.

In the late 1980s, after years as a scientist, Fatemi’s career took a vital detour out of the laboratory and into the hospital.

It was during his residency that Fatemi treated patients for the first time. He met schizophrenics haunted by voices in their heads and desperate parents whose autistic children could not recognize them.

When he works in his lab at the University of Minnesota, Fatemi still thinks about the misery he saw in patients and how he might help to end it.

Autism is a mental disability that leads to lifelong communication and emotional problems. For parents and children, autism is the medical conundrum of the era. In two decades, the estimated rate of autism in children has gone from five in 10,000 to 110 in 10,000 – more than 1 percent.

Fatemi is one of hundreds of researchers across the country identifying brain abnormalities, gene signals and causal agents.

Autism is the only disorder specifically named in the American Recovery and Reinvestment Act – commonly known as the stimulus package – with $85 million in federal grants set aside to fund research over two years.

Fatemi’s research helped him to secure two of these grants, totaling more than $130,000. He and his team may have found one of the first medical tests to diagnose autism. What’s more, he believes he is on the trail to one method of prevention.

Fatemi said that for decades, scientists, himself included, saw psychiatric research as an inexact science, dominated by couch therapy and Freudian interpretations. Now, technology allows Fatemi and other scientists to peer into the tiniest corners of the brain. What they are finding is maddeningly complex. As the biology of the brain is decoded, millions of parents await its results.

“In general, psychiatric diseases have been ignored [by science],” Fatemi said. “But today, there is no room – there’s no time for that.”

‘The force of history’

Born in Tehran, Iran, Fatemi came to the United States in 1970 as a 17-year-old. He planned to attend college and return to the country of his birth.

Fatemi received his doctorate from the University of Nebraska Omaha in 1979. That same year, Fatemi watched his home country’s violent revolution. Then in 1980, Saddam Hussein’s Iraq started a bloody eight-year war against Iran.

Fatemi had a job waiting for him as a lecturer in Iran, but a friend told him not to come back. Fatemi’s friend told him doctors were being sent to the front lines, and if he came back, he would be killed.

Fatemi’s decision was made for him: His life and work would be in America.

“As they say, it was the force of history,” Fatemi said.

After several years as a researcher and four as a clinical psychiatrist at Case Western Reserve University, Paula Clayton, then-head of the psychiatry department, recruited Fatemi to the University of Minnesota in 1996. He wanted to combine his research background with newly gained psychiatric expertise. Almost at once, Fatemi set about studying schizophrenia and autism, two conditions that have many similarities.

In 1997, Fatemi began to study the two diseases by looking at the effect of the flu virus on pregnant mice.

He chose a particular flu strain because of its historical importance as the cause of the 1918 epidemic that killed at least 50 million people worldwide. Though it had disappeared since 1976, Fatemi thought this strain, H1N1, commonly known as swine flu, was worth studying.

Since then, he has run numerous studies, infecting mice with a sublethal dose of H1N1 on days nine, 18 and 16 of their 21-day pregnancy.

In his research, Fatemi has observed significant alterations to the brain of the baby mouse. Some vital parts of the brain – including the frontal cortex, cerebellum and hippocampus, which plays a role in memory – thinned due to the mother’s virus. Later, Fatemi’s group observed a slight level of abnormal growth in the brains – a classic symptom of autism.

The mice offspring, some of which were followed for 14 weeks, also showed behavioral traits seen in autistic patients, including social anxiety and the inability to ignore noise distractions.

During the last year, Fatemi watched as H1N1 roared back to life claiming the lives of thousands worldwide. He fielded calls from pregnant mothers who worried about getting a flu vaccine. With scientific evidence lacking, many parents blame vaccines for their children’s autism.

Fatemi was conflicted. He knows how sensitive a fetus is and would not want a pregnant woman ingesting anything she does not need. But he also knew what damage the flu can do to an unborn child.

Fatemi said that with this strain – which proved a lethal threat to pregnant mothers – the vaccine was necessary, but ideally a woman is vaccinated prior to pregnancy.

Fatemi received a stimulus grant to continue his mice study, now in its fifth year. Earlier this year, his team gave Tamiflu to mice to see if it prevented the effects on the fetal brain.

Fatemi is currently awaiting brain images of the mice, but he wrote about his unpublished findings in an editorial in the October edition of the Journal of Neuroimmunology. The article was subtitled, “Implications for the prevention of autism.”

Fatemi’s other contribution to the field is his study of the protein reelin. Reelin plays a role in the formation of the correct anatomical structure of a fetal brain. In adults, it is important in memory.

Reelin levels are abnormal in the blood and brains of people suffering from a number of psychiatric disorders. In autistic patients, reelin is reduced by as much as 90 percent.

In March 2008, Fatemi received a U.S. patent for a blood test for reelin. He is now in talks with a company that wants to produce a series of blood tests that could someday replace the current behavioral diagnosis of autism.

Fatemi said he hopes his blood test and Tamiflu experiment will help the diagnosis and treatment of autism. But he said he is always doubtful of future results, and he does not want to plan on his own breakthrough.

“Overall, the progress that I see by many, many labs and the accumulation of data is very promising,” Fatemi said. “I think that’s what one has to look at: not just me individually, but the overall picture.”

Among his fellow grant recipients is Sally Rogers. Rogers, a researcher at the University of California Davis, is involved in three projects studying autism.

The three projects had all been prepared but were set aside as grant money dried up during the economic downfall. Both she and Fatemi appreciate federal money in an otherwise lean year.

“I think that what President Obama has done is laudatory,” Fatemi said. “I think it’s significant; this help is tremendous in an atmosphere where there were very few grants that people could get. Science has always been underfunded, everywhere.”

In exchange for the grant money, scientists are required to enter their findings into an online National Institutes of Health database so the research can be spread almost instantly and compiled into larger studies. Rogers recounted that not long ago she would need to flip through several dozen journals or attend national conferences to find other scientists’ work.

Fatemi said databases remind him that he is not alone in his work. He knows that as he looks through microscopes and tracks data, researchers across the world are doing the same.

“You can call it a spiritual camaraderie, that scientists understand one another’s concerns, one another’s enjoyments and excitement,” Fatemi said. “Every day that a new paper comes out that furthers our understanding of these diseases, I think, is an exciting day for me.”

Parents are not the only ones wishing for a cure. Robin Rumsey, assistant professor and pediatric neurologist at the University, has seen behavioral treatment for autism work wonders, transforming distant toddlers to friendly, smart young children. But the treatment is intensive, costly and results in an “optimal outcome” – a child prepared to enter regular elementary school classes – no more than 25 percent of the time.

As she considered the possibility of a scientific breakthrough in the field of autism research – one that would solve some of the diseases’ mysteries – Rumsey sighed.

Fatemi and Rogers admit the battle against autism has just begun. Scientists now believe that dozens and perhaps hundreds of genes are implicated in autism. Each discovery only adds to its mystery, and each answer only raises more questions.

“It’s scary,” Rogers said. “It’s scary to see the number of diagnoses going up and up and to know that there are such important questions. And it takes so much longer than you hope to get the answers.”

Some scientists have speculated that the term “autism” is a misnomer and that there are in fact several “autisms,” much like cancer. When asked, both Fatemi and Rogers said this might prove to be the case.

Despite the uncertainties, Rogers and Fatemi are optimistic. Fatemi excitedly speculated that the next decade may be known as one of classification and decoding of psychiatric diseases.

“Brain disorders of this type, which have behavioral manifestations, are probably the last frontiers of medicine to be discovered,” Fatemi said. “These are terrible diseases that we just need to work on more and more.”