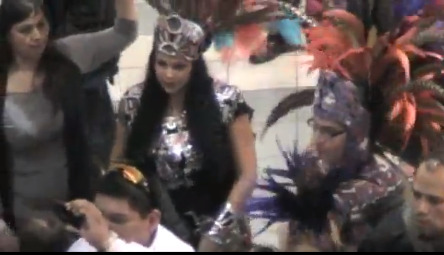 Dancers at Idle No More Flash Roundy at Mall of America

Well, 2012 has come and gone, and the world didn’t end. We have a new president (same as the old president), and in Minnesota we successfully blocked both the Marriage Amendment and the Voter I.D. amendment. But as happy as I was post-election, there’s a certain nagging feeling that I have as I look ahead to 2013. And I hate to say it — I was a big doubter about the whole concept of living in a “New Normal”, but looking back at the reporting I’ve done this past year, it certainly feels like that’s what we’re in right now.

TC Daily Planet did a whole series about The New Normal, for which I did some writing and attended various community conversations in 2011. At the time I was skeptical. The idea that we were somehow entering an age where high unemployement, a lack of economic opportunities, poor economy, etc. were the norm seemed to me a ploy or an excuse to practice austerity measures and decrease investment in things like healthcare and education.

But now that we’re well in the “teens”, I do feel, as I look around me, that this depression-like existence isn’t going to suddenly turn bright and shiny any time soon.

Take arts and culture, for instance. When the economy first took a nosedive in 2008, many arts organizations took an immediate hit. Some of those organizations — such as Intermedia Arts and In the Heart of the Beast — were able to brace for the worst, and ended up coming out on the other side even stronger. Unfortunately, that hasn’t been true for everyone, and I feel like I regularly get called on to write about arts organizations in turmoil, either because they’re hugely in debt, or they are closing, or are ousting their artistic or executive director. When you look at each individual story, sure, there are various reasons for the problems that arise, but ultimately it comes down to a lack of funding — whether from government sources, private foundations, or individual giving. I don’t foresee this trend abating any time soon.

Another aspect of “the new normal” as I see it, which may veer slightly from its original definition, is a decrease in privacy and an increase in the seemingly limitless power of both the military and the police state. Just as “terrorist” suspects can be kept imprisoned indefinitely without trial, and drones sent off to the Middle East willy nilly without regard for citizen life, and as our emails, phone calls, and numerous amounts of data can be looked at without a need for a warrant, so too, even in Minneapolis, our Civilian Review Authority was done away with completely, so that we basically have no citizen-led protection body against overreaching arms of law enforcement.

That’s not to say everything is gloom and doom. There were a few bright spots this year that give me hope for the year to come.

Number one, the Minnesota Court of Appeals reversed the Johnny Northside decision, which means that apparently it is legal to say things that are not untrue. Yay. That gives me hope.

The other happened right at the very end of 2012 (a good sign). It was the Idle No More Flash Roundy at the Mall of America. Honestly, I’ve never seen anything like it, and I don’t totally understand it. I know that the movement stems from the political situation in Canada, but, to me, it was about much more. I saw a group of people standing up and saying “enough is enough” and supporting each other in solidarity. We’ll see if the movement continues its momentum in the coming year.