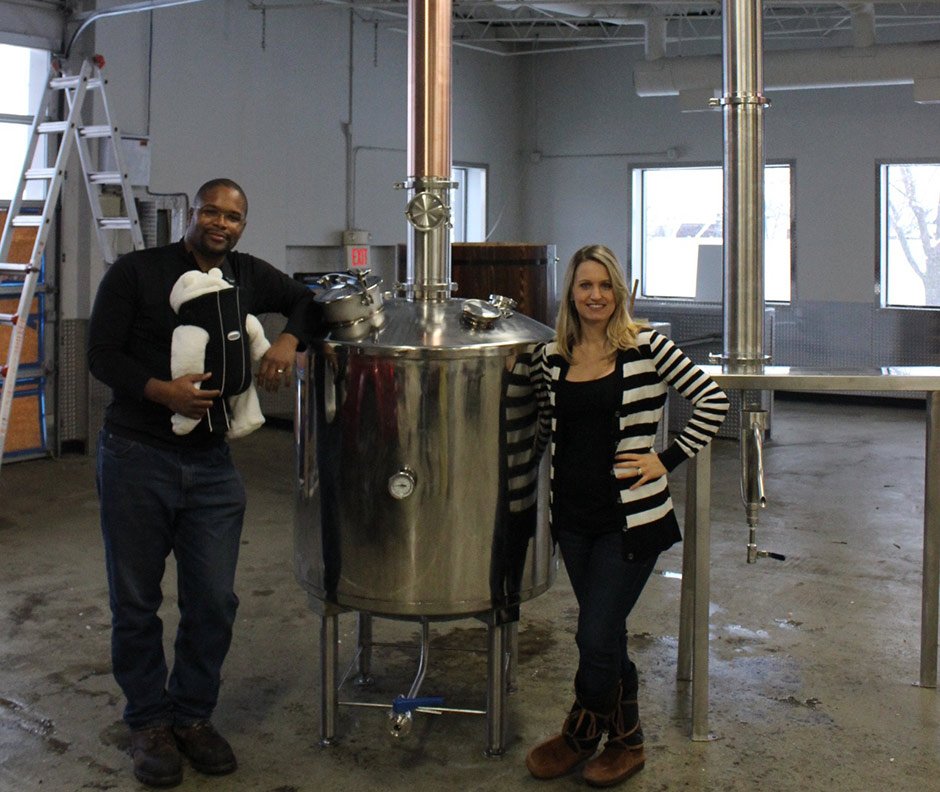 Chris Montana was in law school, studying the intricacies of Minnesota’s 2011 Surly bill, when an often-overlooked micro-distillery clause caught his eye. Montana and his wife, Shanelle, both avid home brewers with an appreciation for fine bourbon, were intrigued. The couple had lived in Washington D.C. during that city’s craft distillery boom and they knew what was possible. After digging a little deeper, the idea of opening a micro-distillery in the Twin Cities area seemed within reach.

In July 2013, the Montanas launched an Indiegogo campaign to test the waters, and ended up raising more than $7,000 to cover the cost of equipment. The dream came one step closer to reality in August 2013 when they signed a lease with Redesign for a building with ample space for a tasting room and distillery. Then at the end of the summer, Chris headed out on the road, touring nineteen small craft distilleries around the country, gathering information and advice from each along the way. Before they knew it, Du Nord Craft Spirits, one of the first small-batch craft distilleries in the Twin Cities, was born.

“It wasn’t that long ago that this idea was just sort of in the ether,” Shanelle explained. “Now we have this array of equipment and this space, and we’re getting our labels approved and waiting for our federal permit. It’s really crazy how fast things are going.”

Du Nord Craft Spirits will begin distilling in the Longfellow neighborhood early this year, with a mission to create their own craft vodka, gin, whiskey, and bourbon, from grain to glass. The business venture marries Chris’s South Minneapolis roots with Shanelle’s rural Minnesota upbringing. Situated in the former Moto Primo building near the corner of Hiawatha Avenue and 32nd Street—the very neighborhood in which Chris grew up—Du Nord Craft Spirits plans to distill using grain from Shanelle’s family’s farm, which is located in Cold Spring, Minnesota.

The Montanas are especially excited about the prospect of starting each bottle from scratch. Unlike larger distilleries, which purchase the Grain Neutral Spirits (GNS) base from which vodka, gin, whiskey, and bourbon are made, Du Nord will be distilling their own Grain Neutral Spirits. This means that all phases of the process—from fermenting and mashing the grain to expelling the alcohol, distilling, aging, and bottling the final product—will take place on site at Du Nord.

This grain-to-glass concept not only allows Chris and Shanelle to highlight the work of local farmers, it also gives them the opportunity to instill Du Nord’s customers with an appreciation for all links in the supply chain.

“I do think there is that disconnect between how a farm operates and how the stuff gets into the city, and it’s really exciting for me to be able to tell those stories through our products,” Shanelle explains.

Sipping the Results this Spring

Once the Montanas receive their distilling license in mid January, they will begin crafting their first batch of L’Etoile Vodka, with plans to have bottles on the shelves by April. Fitzgerald Gin will follow sometime during the summer months, and Appleseed Whiskey will be available for sipping in the fall. They will also begin distilling and aging their Longfellow Bourbon, which will be released in 2017.

In the meantime they are pushing for legislation that will allow them to sell a bottle of their product and serve a cocktail to a customer. Currently, state law allows a micro-distillery to provide tours and serve samples of their products in the tasting room. “We don’t want to be a bar,” Shanelle replied, “But we do want to be able to showcase our product.” The ability to buy a bottle and serve a cocktail would give micro-distillers parity with the craft brewers.

They are also beginning to envision the space. The first still, custom-made by a manufacturer in Iowa, arrived in early December. Look for the copper stack of that beautifully crafted still to be visible from the windows along 32nd Street in the not-so-distant future. And those of you who may have fond memories of the diamond plate V-tread that adorned the walls of the old Moto Primo store should not despair. Based on input from Du Nord’s Facebook fans, Chris and Shanelle have decided to keep the V-tread, combining it with repurposed wood for a true city-meets-country look.