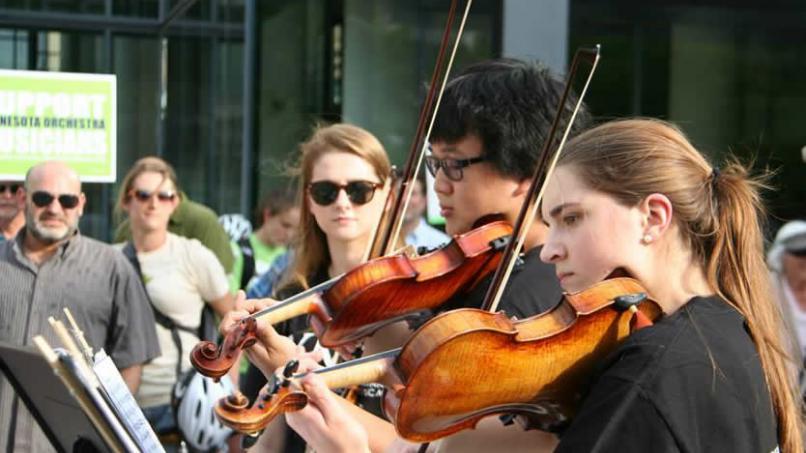 Young musicians, who have benefitted from the training of the Minnesota Orchestra's talented performers, played at a rally Friday where community members called for an end to the Orchestra lockout.

The nearly year-long lockout of Minnesota Orchestra musicians has been devastating to the quality of music in the Twin Cities and to the community as a whole, members of Save Our Symphony said at a rally Friday, where they called on management to bring the musicians back to work.

A large crowd gathered outside Orchestra Hall, where a gala celebration was being held by the Orchestra Association. Nils Halker, speaking for Save Our Symphony, said orchestra patrons were appalled.

“We are quickly approaching the one-year anniversary of the beginning of the lockout imposed by the board and management of the Minnesota Orchestral Association, led by Richard Davis of US Bank, Jon Campbell of Wells Fargo and Michael Henson, president of the MOA,” Halker said.

Members of the Twin Cities Musicians Union employed by the Minnesota Orchestra have been locked out since last Oct. 1, 2012. Health insurance and all other benefits were cut off without notice, and a large portion of the season was cancelled.

Management’s contract proposal includes 30% to 50% pay cuts to musician salaries, as well as healthcare cost increases that would amount to $5000-$8000 annually per musician. Meanwhile, the board has refused to submit to an independent financial analysis and has spent $52 million on renovations to the Orchestra Hall lobby.

SOSMN is a grassroots group of orchestra patrons and music-lovers devoted to pursuing concrete actions to ensure that Minneapolis maintains a world-class orchestra.