TakeAction Minnesota hosted a community conversation on July 12 with the Minneapolis Urban League called Locked Up, Locked Out to give a personal voice to the everyday challenges faced by individuals with a past criminal record.

One in four Americans have either an arrest or criminal conviction on their record – a majority are drug-related or other nonviolent offenses. In addition, according to the Minnesota Department of Human Rights, the disparity between African-Americans and Caucasians with criminal records in Minnesota is four times higher than the national average. Yet the stigma not only continues to shadow over those who have served time, but over their families as well. Having a history with the criminal justice system affects everything from job applications, to obtaining adequate education and housing. Even if a criminal record has been expunged, it can still appear on a background check.

Jamil Jackson, who created the Run and Shoot League’s Change Equals Opportunity (CEO) mentoring program at Farview Park, shared his story at Locked Up, Locked Out of how he was able to overcome the mistakes of his youth. He grew up on Minneapolis’ North Side in a stable home, and was active in his school and with sports. However, as a young teenager Jackson found himself responsible for the care of his younger six siblings. He was able to earn some money working at a part-time job, but was still unable to make ends meet.

“Unfortunately, I got into the ‘hustling’ (drug dealing) game,” said Jackson. “I later got involved with CEO because I saw other young men coming out of prison and not being able to get jobs – the same situation I was once in.”

Last year, Gov. Mark Dayton signed into law the Ban the Box initiative, championed by TakeAction and the Second Chance Coalition. The law requires employers to wait until later in the hiring process before asking candidates about their criminal record, rather than simply checking a box on the initial application. 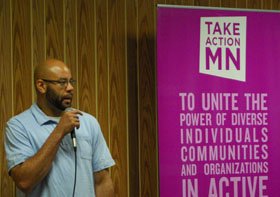 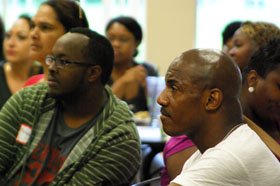 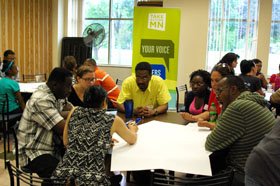 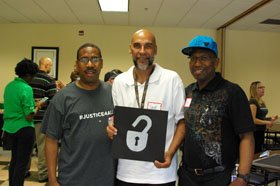 For certain jobs, background checks are still required by state and federal laws, and employers may still exclude applicants if a crime is relevant to the position’s job duties. However, the change offers individuals a second chance at an opportunity for employment and to be evaluated on their skills and experience. It also encourages employers become better prepared for Minnesota’s rapidly changing demographics and aging population.

TakeAction is currently working to restore the voting rights of Minnesotans who are on probation or parole. Voter restriction laws actively work against the promise of fair-minded democracy, the group argues, and excludes those who have the most to gain by voting – people of color, low-income Minnesotans and all who are alienated and marginalized.

In 2012, Minnesotans chose to defeat the Voter Restriction Amendment, a referendum requiring all voters to provide a government-issued photo identification on Election Day.

Justin Terrell, Justice 4 All program manager at TakeAction Minnesota, believes that the Ban the Box initiative created a strong momentum toward alleviating the severe racial disparity in Minnesota’s criminal justice system. At Locked Up, Locked Out, Terrell also shared his personal obstacles because of a criminal past, and how he came to be involved in advocacy for ‘second chance’ legislation. He was active in his church as a youth but, like so many others, peer pressure soon pushed him toward the wrong side of the law.

“I take responsibility for my mistakes, that’s not what this is about,” Terrell said. “We can’t change people, the one thing we can change is the system. This is about taking action, and Ban the Box is a good start.”