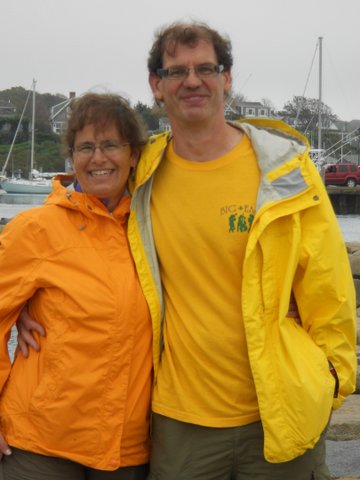 At age 54, Minneapolis union members Anne and David Winkler-Morey spent 14 months bicycling 12,200 miles around the perimeter of the United States. They talked with people, shot photos, and documented workers’ lives. Anne had been laid-off from a teaching position at St. Cloud State University. David took a leave of absence from his job at Anthony Middle School.

On the 14-month bicycle trip I took with my partner David, we rode through depressed post-industrial communities, “Right-to-Work” states, and a few areas experiencing an industrial boom. We talked to Walker protesters in Wisconsin, Occupiers on Wall Street, truckers in Texas, teachers and farmworkers in California, oil workers in North Dakota.

In Waterbury, Connecticut, we stayed with labor organizer Blair Bertaccini. Like so many one-industry cities in Michigan, Ohio, and upstate New York, Waterbury — once the brass capital of the world — never diversified its economy when times were grand, so when the factory closed so did the town.

As we entered downtown we saw collapsed roofs with plants growing on them. I asked Bertaccini what the economy of Waterbury is today. “Halfway houses, a jail, a hospital, that’s about it,” he replied.

The labor movement has a vibrant history there. Bertaccini is president of his AFSCME union. Connecticut workers used to enjoy a 35-hour work-week, which they lost only a decade ago.

Bertaccini works for the state, putting the bad guys behind bars. He told us inspiring stories of walking into the offices of CEOs with two police officers and handcuffing incredulous employers guilty of breaking work contracts. He said the industries most likely to pay workers nothing for their labor are restaurant, construction, and trucking.

“Sometimes employers are taking advantage of undocumented workers,” he reported, “other times they escape their obligations by declaring their employees ‘independent contractors.’ Of course there is nothing ‘independent’ about these workers. A FED EX driver can’t truck something other than mail!”

We bicycled through ten “Right-to-Work” states, including a month in Florida, a state with some of the greatest wealth disparities in the country.

While Miami is one of the most diverse cities in the country, the rest of the states is highly segregated. In Boca Raton, we rode by homes hidden by hedges as big as buildings, owned by whites, designed by Latino gardeners.

In Florida, we noticed that infrastructure disappeared when the road name changed to “Martin Luther King,” signaling entrance into a black neighborhood. Bike paths disappeared, road quality deteriorated, parks and libraries were non-existent.

In a café in Chattahoochee, Florida — where the economy is based on a state hospital and a prison work camp — I talked to a black woman in her 70s, who came in looking for something she could afford that would fill her up.

She told me she worked at the hospital for 32 years, before retiring to take care of her ailing mother, who died a few months later. I asked her if they gave her a good retirement package. Her face hardened: “NO.” Then swiftly, softly: “but I’m grateful for what I get.”

If one counts prison labor, Florida’s black employment figures are high. This is a right-to-work-for-nothing state, a socio-economic system dependent on prison labor, not just to fix roads in Chattahoochee, but also to process meat and run printing presses. In addition to beaches, oranges, and Mickey Mouse, prisons, courts and unemployment offices are major industries here.

White poverty is rampant in Florida as well, especially on the west coast and the panhandle. In the all-white town of Westville, a local man told us: “Everybody here is poor. They farm, sell firewood and scrap metal to get by.” Timber is the major legal industry but illegal enterprises are primary: “It used to be moonshine, then marijuana, now it is meth.”

We also spent time in states where labor movements are vibrant.

Riding into Coal Creek in Washington state, we saw International Longshore and Warehouse Union signs at every home and establishment. A few years back, the state granted tax exemptions and agreed to a government seizure of private land to help the joint-capital group EGT build a grain terminal in the Port of Longview. In return, EGT promised to create union jobs in Colvitz County. However, EGT recruited non-union workers from out of state to build the elevator and then broke a 70-year union contract between the Port of Longview and the ILWU.

In response, ILWU has organized mass picket lines involving thousands. They’ve stopped trains from entering the grain elevators. Protests have led to many arrests. The union is suing the county for police brutality and for denying their rights to a trial. They accuse local law enforcement of acting as jury and judge when they arrested protesting ILWU members.

When we left Washington, we entered Priest River in “Right-to-Work” Idaho and met a man who spent 37 years unloading logging trucks. “If I had a dollar for every truck I unloaded, 70-100 a day…”

I asked him if there are any other industries in Priest River. He said: “We do need jobs because a couple mills have closed down. But what we have is this industrial park — computer businesses and the like. Washington has the highest minimum wage. So they come here where they can pay $7 an hour. They would pay $5 if they could get away with it. Loggers get paid $20 an hour. We need jobs, but these new companies? We are better off without them.”

One thing became clear to us as we bicycled the patchwork of “Right-to Work” and union regions and traversed 1,500 miles of the U.S.–Mexico border. The struggle for labor rights is one that we must commit to locally, nationally, and globally.

Anne Winkler-Morey teaches at Metropolitan State University and is a member of the MnSCU InterFaculty Organization. Her partner David Winkler-Morey is a school social worker at Anthony Middle School and a member of Minneapolis Federation of Teachers Local 59. They both sing with the Twin Cities Labor Chorus. The couple lives in Minneapolis. They began their bike trip in June 2011 and completed it in August 2012.