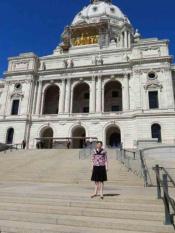 Kayla Meyer, 15, of New Prague, stands on the steps of the state capitol before testifying before the legislature. She is credited with helping pass a new law that requires coaches to bench youth athletes suspected of having a concussion until they are cleared for play by a medical professional. (Photo courtesy Kayla Meyer)

Kayla Meyer was inspired to testify before the Minnesota Legislature last spring and helped get a law passed that requires youth sports coaches to bench players suspected of having a concussion until they are cleared to play again by a medical professional.

Kayla Meyer, 15, from New Prague, Minn., can’t be around when her mom vacuums or uses the blender. After suffering two concussions while playing hockey, she’s now super sensitive to loud noises.

She suffers from chronic headaches, has trouble concentrating and missed more than 80 days of school last year. Because of her struggles, Meyer was inspired to testify before the Minnesota Legislature last spring and helped get a law passed that requires youth sports coaches to bench players suspected of having a concussion until they are cleared to play again by a medical professional.

The law also requires youth sports organizations in Minnesota to provide officials, athletes and parents information about the symptoms and risks of untreated concussions. Coaches and officials will also need to take online training and refresh that training every three years.

Concerns about the long-term impacts of concussions and hits to the head have been ramping up after new research indicated some deceased professional football players are suffering from depression and early dementia because of head trauma.

Meyer started playing hockey at age 3, but can no longer play. “I thought I was going to play in college,” she said.

Her first concussion happened during drills at hockey practice in 2009 when she slipped and hit her head on the ice. She was benched for only one week.

Ten weeks later, two girls slid into Meyer during a practice and she got her second concussion. She thought she was fine and skated until the end of practice.

But she was at the doctor’s office the next day. Her doctor told her to “sit out for two weeks, and then you’ll be fine,” Meyer said. 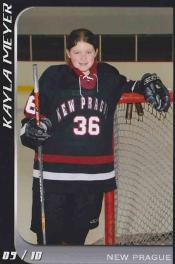 But Meyer wasn’t fine. “I was in pain and didn’t want this happening to me, but I was more worried I wouldn’t be able to play hockey,” she said.

Left: Meyer poses for her New Prague High School hockey team photo. She started playing for the high school team in eighth grade in October 2009, but due to her concussions, was done with hockey just two months later. Below: Meyer goes for a goal while playing for a 12U association hockey team when she was 12. Meyer usually played left wing. (Photos courtesy Kayla Meyer)

Concussions are a kind of traumatic brain injury, according to the Centers for Disease Control and Prevention. The time it takes to recover from a concussion varies depending on how bad it is, but it’s easier to get another concussion if you haven’t healed yet, and the more concussions you have, the more brain damage you can suffer, and the longer it can take to heal.

When the headaches and trouble concentrating started to affect her schoolwork, Meyer benched herself, permanently.

Meyer said coaches often just have you sit out until you say you can go back in. Sometimes they only let you out of the game long enough to grab water and send you back in. It depends on the sport and how important the game is, Meyer said.

But without proper diagnosis and treatment, a concussion may result in “serious long-term consequences or risk of coma or death,” according to the Brain Injury Association of Minnesota.

Concussions are “essentially a bruise on your brain,” said Elizabeth Watkins, a University of Minnesota neuroscience graduate. The brain sits in cerebral fluid, which protects it from hitting the skull. But a hit to the head can make the brain bang against the skull, she said.

With concussions, “you (can) have problems with memory. You’re not feeling right,” Watkins said. “People in America tend to write them off in sports … concussions are serious.”

But symptoms, like feeling groggy or having a headache — can be hard to spot. Meyer’s mom said she didn’t spot them. See sidebar for a description of concussion symptoms.

According to the Brain Injury Association of Minnesota, “Symptoms may not appear until days or weeks following the injury or may even be missed, as people may look fine.”

Meyer is now an official spokesperson for the Brain Injury Association of Minnesota. The association asked her to testify in front of the legislature. “I said ‘yes’ right away,” Meyer said.

Hamilton said he felt strongly about the issue because he’d seen his daughter’s boyfriend suffer from temporary paralysis and other medical issues after receiving a concussion while playing football.

Kayla and her mom did not work directly with Hamilton but met him the day Kayla gave her speech at the capitol. “It was kind of scary but also exhilarating and fun,” Meyer said of speaking in front of legislators.

Then Meyer stood next to Gov. Mark Dayton as he signed the bill into law June 8.

“I really hope it will help prevent concussions or prevent them from getting bad like mine,” she said. “Now my kids will be playing (hockey) no matter what” because they’ll be better protected.

Before the law went into effect Sept. 1, “everyone is being notified about being trained,” Meyer said.

Meyer said getting the bill passed was a long process and she’d never want to go into politics, but she has begun advocating for teens and concussions. She gave a speech about concussions to a youth group in Hopkins on July 26.

She advises students who want to get involved with the political process to “just go for it,” she said. “A lot of people are really nice. Get over your fears and just try it out.”

Meyer still feels some effects of the concussions.

She’s struggled with school because of her symptoms. “I zone out really easily,” she said, but it looks like she will graduate at the normal time, despite all the school she’s missed.

When asked if her symptoms are permanent, Meyer said “I hope not. I just take it one day at a time.”