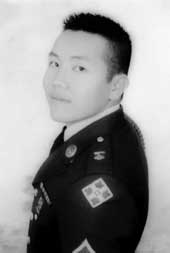 The Asian community of Minnesota has lost a son in the war in Iraq. U.S. Army Specialist Qixing Lee, 20, the son of Chedrua and Jianeujongai Yanlecheuyin, of Minneapolis, died on Aug. 27 in Taji, Iraq, when an improvised explosive device detonated near his M2A3 Bradley fighting vehicle during combat operations.

The Department of Defense American Forces Press Service reported last week that Lee was killed along with four other soldiers, Sgt. Moises Jazmin, 25, of Providence, RI, Spc. Shaun A. Novak, 21, of Two Rivers, Wis., and Spc. Tristan C. Smith, 23, of Bryn Athyn, Penn. The soldiers were assigned to the 1st Battalion, 66th Armor Regiment, 1st Brigade, 4th Infantry Division, which is based in Fort Hood, Texas.

Qixing Lee also leaves behind two elder sisters, Xiaoying and Xiaomei, and three younger siblings, Liangqing, Mouwang, and Ciashia. He also had a fiancé in California, and according to his sister, Xiaomei, he had planned to come home after this tour to see what the couple wanted to do before deciding whether or not to reenlist.

Xiaoying is serving as a Military Police officer in the U.S. Army and is stationed in Seoul, South Korea. Liangqing is a U.S. Marine and stationed in 29 Palms, California, where he is training in preparation for service in the Middle East.

Qixing graduated from North High School in 2003 and enlisted into the Army. He completed Basic Training and Infantry School at Fort Benning, Georgia, and was then stationed at Fort Hood with the 1/66th about in 2004. He has spent much of the time since then in Iraq.

SFC Mark Woodbeck represented the Army Casualty and Memorial Affairs Operation Center, and was present over the course of several days as a compassionate source for the family to assist them with information and arrangements during this emotionally stressful time of bereavement. Woodbeck will be a long-term advocate to the family.

The family had a lot of questions for Woodbeck, who was present on Tuesday while clan elders met with the family. He was only able to answer what was known about the incident. Lee’s sister Xiaomei said they learned that their brother and the other four soldiers had stopped and exited the vehicle when the detonation occurred. They do not know all the details because there were no survivors.

“Whatever they do know, they have been very forthcoming,” said Xiaomei. “We can only speculate on what could have happened.”

Xiaomei, 21, who is preparing to attend Brown Institute in October, described her brother as a very loveable person who made friends easily. She said that he joined the military as they way he wanted to help and save people, defend his country, and help the Iraqis. “He had a big heart”

Xiaomei said her brother had “cheated death” a few times already and that now that he has paid the ultimate price for his beliefs, she hopes that people will not take the things they believe in for granted.

The family is making arrangements for the return of Qixing Lee’s remains and for a mass of Christian burial.

“The Vietnamese Community of Minnesota would like to send our condolences to the U.S. Army Specialist Qixing Lee’s family,” said Phuong Dao, president, Vietnamese Community of Minnesota. “We also would like to express our thanks for your son’s bravery and sacrifices to fight for our freedom. May the power beyond welcome him and watch your family.”