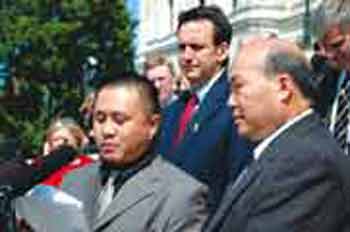 Although he had lost his battle, Cha Fong Lee can say he may have won the bigger war. On Friday, May 19, just days after Mr. Lee received the crushing verdict from the Minnesota Court of Appeals that he had lost his last chance at retaining the property taken from him by the City of Brooklyn Center, the proud business owner stood proudly with Governor Tim Pawlenty as he signed eminent domain reform into law.

“Had the City of Brooklyn Center tried to take Mr. Lee’s property now, the City would definitely lose,” Explained Lee McGrath, executive director of the Institute for Justice Minnesota Chapter, a nonprofit legal consortium that has been fighting for eminent domain reform. “But because the new law is now only beginning to take effect, there is no chance for Mr. Lee. His property has been lost for good.”

Where Mr. Lee’s thriving market once stood now sits a field of unkempt grass. No signs of a redevelopment is apparent anywhere and phone calls to the city planners remain unreturned.

But because the old laws of eminent domain allowed governments to take virtually any piece of privately owned land for any purpose it may dream-up, the City of Brooklyn Center will not be forced to return the land back to Mr. Lee.

Still feeling the sting from the Court of Appeals verdict, Mr. Lee explained that he would have been able to work with the City of Brooklyn Park had their offer to purchase his property was fair.

“They offered to pay us $3 million, but we had invested $5 million into the property. Now I’m struggling to keep the family business together because we can’t pay off all our debt. They didn’t give me enough to get my life back together.”

Under the new legislation, which won unanimously in both the House and the Senate, governments that wish to take privately owned land will need to provide a preponderance of evidence against a property owner to prove the property is blighted.

While the new law doesn’t apply to Mr. Lee’s case, property owners everywhere are rejoicing with a better sense of security.

Moua Soua, one of the owners of the Metro Funeral Home in Maplewood, gasped a sense of relief when he heard about the new legislation.

“The City of Maplewood has used the word ‘eminent domain’ in their negotiations to buy our Funeral Home. And it scared us,” Moua declared. “But with this new law, we can rest a little easier to know that the government doesn’t have that kind of power any longer.”

Mayor Diane Longrie of Maplewood, a noted advocate of the eminent domain reform, revealed that indeed the “Metro Funeral Home didn’t play a role in the development of [the new Down Town] that the city has been planning. The Funeral Home just never came up in the planning, I don’t really know why.”

As state Senator Tom Bakk, DFL-Cook, a chief sponsor of the legislation echoed, “If it makes it harder for cities to take people’s private property, I think that’s OK. It should be very, very difficult for governments to take somebody’s private party.”

He went on to remark that this piece of legislation will become known as the biggest, most important law that was passed in this legislative session.

“No other piece of legislation passed this session will play a bigger role and have a bigger impact on the lives of everyday citizens in the state of Minnesota,” Sen. Bakk proclaimed to a roar of cheers from the crowd.

In the mix of cheers, Cha Fong Lee remained justifiably ever so cautious. As he was a victim to the land robbing communists in Laos, he is now a victim to one of America’s treacheries.

As his son, Bobby Lee, eloquently stated in the speech he gave in front of the Capitol that day, “The City of Brooklyn Center took this man’s dream and dug a shallow grave to bury it in. But he’s been a fighter his entire life and he’s still a fighter.”

Content to look ahead, Lee vows to rebuild his empire starting with the store he still owns in St. Paul. “I’m just starting to get my life back together. But I’m still here and still fighting.”

Talk about eminent domain in our “business forum”:https://www.tcdailyplanet.net/forum/60.