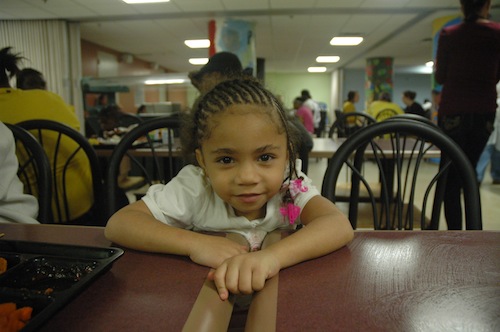 She was four years old — this little girl, with cornrows and pink barrettes, staring right at me, with curiosity and with a bit of a challenge. Little kids have an openness that adults have lost, and this girl hadn’t learned any abashedness yet. She did not know shame.

She and her younger siblings, one who was two and one-half years old and one an infant, had been staying for a week at People Serving People. I interviewed their parents, Natasha and Ivory, about their experiences for an article I wrote about the shelter last week.

But actually it was difficult for Natasha to get a word in edgewise. Her daughter was very interested in me, and more specifically, my camera.

“Do you want me to take your picture?” I asked.

“Yes!” she said. And there was that stare again. Right into the camera — a natural. I showed her the picture, to her delight, realizing that I was dawdling and not getting the interview I needed for my story.

And then she wanted to take a picture. “Well,” I said, nervous. It’s actually not my camera, it belongs to my boyfriend, and it would really not be a good thing for me to bring it home to tell him that I had lent it to a four-year-old who dropped it. But as she reached her arms out, I knew there was no resistance. 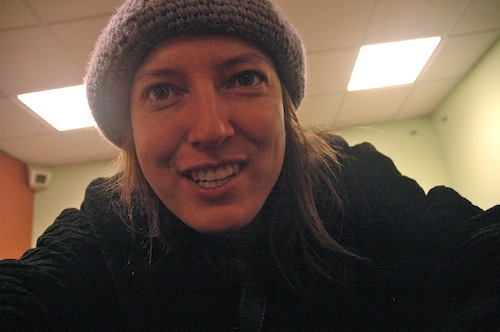 I turned it around and let her hold it, not letting go of it myself. She started pushing buttons and I showed her the right one to push. Click. Now I have a portrait of myself, looking at her, delighted. 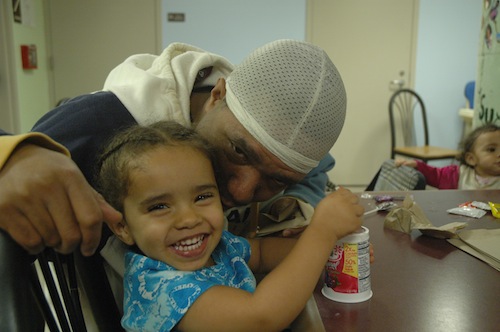 “Okay,” I said. “I need to talk to your mom, now. Okay?” But her sister, was not to be outdone. She wanted to play with the camera too. I had a bit more of a backbone this time, and suggested that I take a picture of her with her dad. That sounded good to her, so she threw me a huge smile.

They’re just little kids. Even if they are aware that they are in a homeless shelter, they don’t get all the connotations of what that means. Natasha described them as being happy there. They had a playground, and other kids to play with. They happily ate their cafeteria-style lunch of soup and chips, with the extra treat of Yoplait yogurt.

But, as for me, I weep for them. I went on a tour of the shelter, which was a weird experience. It felt strange, being a kind of tourist at this open house. The rooms seemed so small, the beds so uncomfortable. But, as Natasha said, at least the family was together, and PSP has lots of resources to help families get out of emergency situations.

I think about Herman Cain, who voiced the sentiment held by many Republicans, that if you’re not rich, if you don’t have a job, you have no one to blame but yourself. What about these kids? Are they to blame for their poverty? Is it their fault their family lost their home? No. Of course not.

Three children, Tailor, Rain and Sequoia, are the voiceless part of the 99 percent. Republicans want to cut programs to help children like them. These children are not as important as tax breaks for the rich or sports stadiums.

One day they will have a voice. If they can make it through this. I have a good feeling about them. That four-year-old girl has got intelligence and strength in her eyes, and one day maybe she will be able to fight for equality and social justice. In the meantime, it is up to the adults who can speak, who can make a difference, to fight for her.