I used to love Disney movies, especially The Lion King. Timon and Pumbaa were hilarious. Lion King 1 and a 1/2 was pure genius. The animation was fluid, characters were powerful and interesting, and the music was excellent.

“Okay. I’m gonna get your money for ya. But if you don’t get your review in on time, know what’s gonna happen to you?”
“What?”
“You’re gonna have to answer to the Disney Corporation.”

Now I prefer the worlds of A Clockwork Orange and Dr. Strangelove, which starkly contrast with my taste in movies as an 8 year old, to say the least. My once devoted love for Disney has turned into a passionate distaste. But interestingly enough, The Lion King has the potential to have the same level of political intrigue as those movies. Depth, distinction, and uniqueness are all in The Lion King’s grasp. But every time the musical gets close to achieving those things, it falls back to it’s source material in a really bad way. And maybe I’m just expecting too much of a Disney musical. But when the production wavers between mature themes, beautiful puppetry, and a unique aesthetic, but continues to bring back tropes I’d expect to see fromThe Lion King: On Ice!, I can’t help but feel teased. Very teased.

The first thing I noticed when walking into the Orpheum was it’s audience. Many young kids were in attendance, and a lot of 90’s children were present, myself included. The curtain featured artwork that was very reminiscent of the Lascaux Cave Paintings in France. But the thing that caught my eye was the percussion section. To say there were lots of drums would be an understatement. Not as many as Neil Peart has though. But does anyone have that many!?

If I were him, I would be too busy playing all those things to sit still for a silly picture.

This is Tease Number 1. I thought percussion, specifically Latin and African percussion, would be vital to the show’s score. Not so much. The times where the percussionists get to shine are not nearly as stunning as I’d hoped due to some awkward scoring and staging (the percussionists themselves were great), even though their location on the first floor suggests importance. Likely it was just for sound. But even then, their sound clashes with the rest of the ensemble’s on many songs.

Rafiki has some moments in the beginning, but those aren’t very spectacular compared to what happens next. During “Circle of Life with Nants’ Ingonyama,” we get our first glimpse of the puppets. And they are awesome.

When the puppeteers were in their characters and gathering on stage, it was a thrill to watch. The unique presentation and stunning aesthetic was brilliantly done. And although the vocals sounded pretty phoned in, and there wasn’t very much bass at all (Until some Inception style bassy accents at the end of the song, which is funny because Hans Zimmer is credited on “Nants’ Igonyama”), the puppeteers brought the Pridelands to life. On stage. In person. And the Disney plague was nowhere to be seen.

This first scene made me expect more mature, stunning take on the Pridelands. This is Tease Number 2. Majority of the musical shies away from the epic moments and beautiful images contained in the first scene, or go out of their way to turn them into Hyena raves (in the case of the first “Be Prepared”), silly running (during Scene 10 set in the Gorge), or emotional songs with an ABSOLUTELY DROP DEAD GORGEOUS GREY BACKGROUND! (“Shadowlands”)

Scenes like this made me miss the subtle blues and bright oranges of the first act.

I think the lions missed it too.

And yes, I understand that the director probably wanted to remove the color to convey the drought and emotional depression the characters were facing. Maybe they wanted us to miss the colors as well. But I already get enough grey in Minnesota. An obnoxious amount. I’d much prefer it if they used hot colors to symbolize the drought.

After the first scene, the production slowly started losing my interest (an annoying sound emitted by one of the light instruments drew my attention. It sounded like an old projector.). The acting isn’t very impressive in the beginning, the humor is directed towards the younger audience, and the sound took a while to become Broadway quality (but I’m spoiled, I have some really nice headphones). And when “I Just Can’t Wait to Be King” starts, the sudden change of aesthetic shook me into “What. Whaat. WHAAT!?”-ing.

But this was also when the music started getting fuller, and the young Nala and Simba became more interesting. But the problems outweigh the benefits in this instance…and in many others. Which brings me to Tease Number 3. I thought the aesthetic established would be constant. I was oh so wrong. The appeals to children on “I Just Can’t Wait to Be King,” “Hakuna Matata” and during The Jungle scene to name a few brought me out of the world they were trying to establish, and back to writing “wut” in my notebook. The maturity flashed away every time they brought the strobe lights out, and was worsened by the very unconvincing stage fighting and slowmo deaths. This is where I started getting the feeling of The Lion King: ON ICE!!!

Then, once again, we fall into another entertainment drought. This time with a really obnoxious and out of place electric guitar on “Chow Down”, which continued to find it’s way into other songs it really didn’t belong in.

And then we got to “They Live in You.” Which was another redeeming moment for the production.

(I’m not sure if that’s Dionne Randolph, but I think you get the idea)

It played to Mufasa’s strengths. I saw why he was in power, and I experienced the deep bass and calm authority portrayed by Dionne Randolph. The stiff acting by him before was redeemed somewhat, as the score, vocals, and presentation brought me back into The Lion King.

And this goes on, and on, and on again. I consistently felt teased, expecting the musical to go deep, but it always ended up skimming the surface (like blades on an ice rink! Ha!). The WW2 images conjured by Scar and his minions, only to be broken down by a Hyena rave. The strength of “He Lives in You” (Reprise), only to be ruined by an ending that tries to replicate the movie to the point of hilarious slow mo flashy messes and weak stage combat. Even now, I can just feel the pain of being teased for 2 or 3 hours. 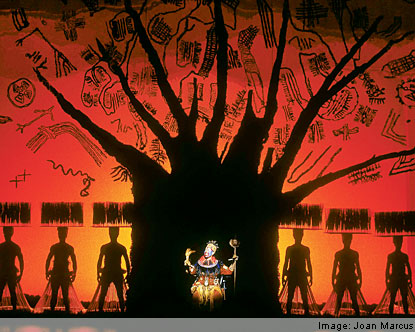 I really want to love The Lion King. It’s got character, it’s beautiful, and potential for so much depth. And it’s cast is as diverse as it is talented, which is very uncommon for Broadway tours, and potentially a single reason to see the show. But for every positive there is a negative. Like a relationship, there are plenty of ups and downs. Is this one worth your time? Yes. But lower your expectations, and realize that though it appears mature on the outside, it is still very much for children at heart. If you likeThe Lion King, you will likely love it’s musical. Tickets and Information here.

And don’t watch a bunch of Stanley Kubrick’s work before you see it. Try some Disney movies instead.