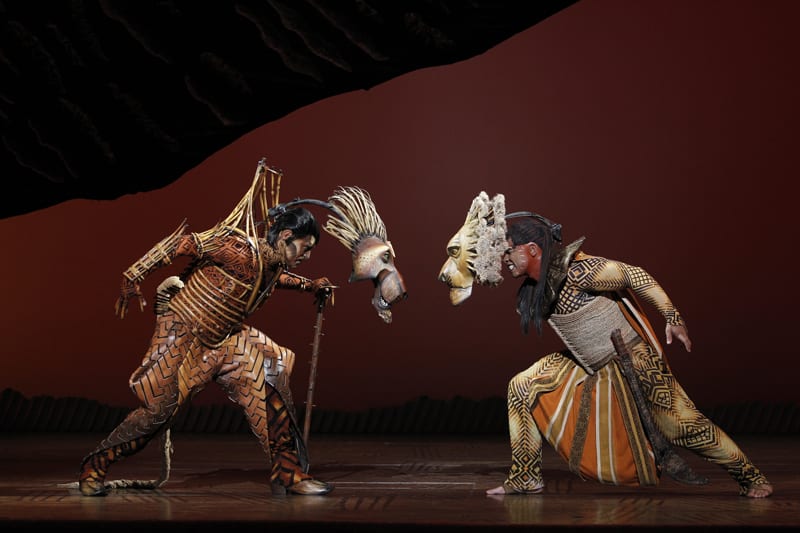 On stage, The Lion King feels like a vibrant celebration of African life—but once you start tracing its cultural pedigree, your mind reels. The story was cribbed from Shakespeare by Iowa-born sci-fi guru Thomas Disch, then set to music by flamboyant Brit Elton John with lyrics by Andrew Lloyd Webber’s main man Tim Rice. The film was produced by the American mythmakers at Disney, subsequently being adapted for the stage under the direction of Julie Taymor, a well-traveled Massachusetts native. Wait, what continent are we on?

However this team managed to pull it off—South African composer Lebo M collaborated with Hans Zimmer (a German) to create the rich score, and Taymor’s stunning costume design integrates traditional African ceremonial garb with clever puppetry—The Lion King succeeds with the kind of energy and imagination that’s extremely rare in entertainment of any genre or medium. It’s a bar-setting exemplar of what can be done with a Broadway musical, and it’s been going strong since its 1997 world premiere at Minneapolis’s Orpheum Theatre, where it’s currently playing a most welcome return engagement.

The 1994 animated film on which the musical is based has proven surprisingly sturdy—much more so than, say, Pocahontas (1995), which Disney animators were at the time much more enthusiastic about—but the stage adaptation improves on the film by deepening the story’s resonances with both African and European cultural traditions. On stage, there’s a clear anti-imperialist allegory that was buried in the film despite Jeremy Irons doing his louchest as the voice of villain Scar.

Not all of the new narrative and musical material added to expand the 87-minute movie into a stage epic is an improvement. Though the new instrumental and chorus material by Zimmer and Lebo M is wonderful, among the new songs (none were written by John or Rice) only “He Lives in You” is on the level of the songs heard in the film. One new scene, in which a delusional Scar tries creepily to seduce his nephew’s girlfriend Nala (“My, how you’ve grown!”), takes the show in a direction it really didn’t need to go.

It’s also true that there’s only one James Earl Jones (who voiced King Mufasa in the movie), but the touring cast are uniformly superb, making the roles their own with appropriately regal/craven miens—right down to the little b-girl baby elephant. One of the most extraordinary aspects of Taymor’s costume design is the way it amplifies rather than masks the actors’ human physicality: the lion masks worn by Dionne Randolph as Mufasa and J. Anthony Crane as Scar, for example, are perched atop the actors’ heads except when the lions are angry, when by movements of their shoulders the actors can cause the masks to slide down and extend. Among the show’s many striking visual tableaus is an eerie moment when Scar ascends a pile of bones in silhouette, Crane’s haughty mask extended on its spine-like support as though to illustrate the usurper’s fragile hubris.

From its first moment—the unforgettable gathering of a menagerie that inspired spontaneous applause among the opening night audience—to its last, The Lion King is a genuinely inspiring theatrical experience. If you’ve never seen it, go. If you have, you may well already have your ticket to go again.