For those unaware, Minneapolis is planning a Streetcar system, with the first corridor under development being the Nicollet-Central line. I went to the open house Monday night (9/9/13) in an effort to get up to speed on a few details, ask questions, and challenge the staff on some of their assumptions. I’d like to use this post as an update on some of the information that may be unknown to most or simply lost in the million-page Detailed Evaluation Report (and accompanying appendices).

Enough has already been written on the general pros/cons of streetcars vs. enhanced bus (or other options), both on Streets.MN and elsewhere on the blogosphere. I’d like to keep the discussion as specific as possible to this project, so engaged community members can have a nuanced discussion regarding the corridor and the best route forward. I’d also like to praise the City and Met Council staff (notably Peter Wagenius and Charleen Zimmer) on their work to this point, all the details they have considered, and openness to the public thus far.

So, what were some key issues, responses, and my take on the situation as an amateur urbanist/transportation geek?

One of the primary goals of this corridor is to “Connect People and Places.” The question we should all be asking, whether it’s built as a streetcar or enhanced bus, is if it’s actually improving the mobility or residents and visitors along the corridor. Both technologies will feature easy and fast boarding thanks to platform-vehicle floor interaction (with the streetcar scoring a bit better due to the fixed-guided rails), off-board payment, and multi-door egress that all help reduce dwell time and improve the rider’s experience. Additionally, both projects would get a certain level of signal priority to help increase average moving speed as well.

Notice the similarities in how these feel

With that said, an Enhanced Bus or Streetcar will only save current riders between 6 and 7 minutes for the full 9.2-mile corridor compared to existing bus service. This isn’t nothing, but most people won’t be taking the bus/streetcar the entire length on a daily basis, and therefore will only see a time savings of 1-2 minutes depending on the segment they travel on, with some seeing no improvement whatsoever.

I’ll put on my Jarrett Walker hat and note that travel speed isn’t everything; in fact, it can often become insignificant relative to other factors, most notably frequency. Frequency was a major selling point at the meeting, with Mr. Wagenius rightly pointing out that “frequency is freedom,” especially for younger people looking to live car-free (or at least car-light). Unfortunately, the streetcar and enhanced bus are proposed to operate at the exact frequencies as the current bus schedules – 7.5 minutes in AM/PM peak and 10 minute mid-day. Similarly, issues with today’s packed buses will be solved with nearly identical articulated bus and streetcar rider capacities of roughly 115 people per vehicle.

On net, neither technology drastically improves residents’ ability to get to the things they do on a daily basis (work, grocery, day care, etc) any faster or more reliably than they can expect today. In fact, it would still take someone 20 minutes (excluding walk-time at the beginning and end of their journey) to travel from Lake St to the Blue Line connection. So what are some options out there to help with this?…

Giving transit strategically placed dedicated right-of-way (ROW) throughout the corridor may have potential to impact travel times. When asked about this, staff responded it’s a project non-starter, mainly because of parking, and therefore wasn’t even studied. For a corridor of major importance, investment, and ridership, I question this notion. While we cannot suggest wholesale removal of on-street parking (particularly in front of businesses), we need to ask the tough questions with a good level of rigor:

None of this has been evaluated yet to get a better idea of the potential benefit and cost tradeoffs. Additionally, staff stated that parking meter/rate changes are not in scope as part of this project.

It seems to me that this is a missed opportunity. Station dwell time will always slow transit down relative to other vehicle traffic, but even so the Traffic Impact appendix shows that a car traveling the corridor will be able to do so much faster than transit: 33.2 minutes compared to 45.9 minutes for the improved bus. With signal priority and strategic bus/streetcar lanes in low-impact areas (read: doesn’t take away from business parking), this time could be reduced to car times (or even faster!). The problem is we haven’t seen an analysis done to say whether this is true or not, and where appropriate locations would be.

As others has been pointed out (also at Streets.MN), the city is definitely viewing this as much of an economic development project as a mobility project. The project documents and staff responses to my questions don’t provide too much detail beyond stating that developer feedback is overwhelmingly positive toward streetcars. They thus applied a development potential rating of “medium” to enhanced bus and “high” to streetcar. The economic impact analysis does a great job analyzing the entire corridor’s maximum development potential based on current zoning, comes up with a potential value to paint a broad picture, but falls short and simply leaves it at that.

To me, this qualitative feedback is not enough to hinge a major decision with additional costs ranging from $100-300 million. Developers typically state that permanence of a streetcar line is a major reason to develop. I question this: why would a city move a bus route that cuts right through 2 of the most currently developed streets (which has been running there since the Streetcars were last removed)? Did the developers surveyed take in to account the platform capital investments as a sign of permanence?

Regardless, we can at least try to quantify the likelihood of development based on a streetcar vs. enhanced bus. Ridership projections for the two show a 50% adder for the streetcar, so it stands to reason that if developers base their investment decisions on future tenants’ affinity for streetcars relative to buses, then they would be 50% more likely to build along this corridor.

I ran some numbers to find out what the “economic development” ROI would look like, assuming two different scenarios. The first has a streetcar attracting 50% more development (as assumed above), the second with the streetcar doubling the development (the “marketing stretch goal”). I have no idea how much development as a percent of the maximum potential (based on zoning) would occur, so I ran it with the enhanced bus generating 5 and 10% of the value calculated in the study by year 30 of operation: 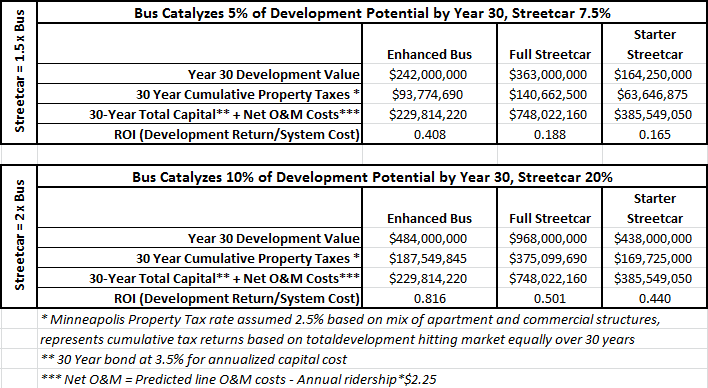 Obviously this doesn’t paint the entire picture of return, as development spurs many things: construction spend, new jobs may take hold in newly created spaces (more than likely most will re-locate from elsewhere in the region), new purchases, new residents that may have chosen another region, etc. State and federal dollars will also be funding the project, and thus receiving some of the return through sales taxes and state/federal individual/business income taxes. This proves how tricky using public funds for “economic development” can become – do we ever go back and calculate what investments had positive return? How sure are we that this would not have occurred without the transportation infrastructure (for example, Hennepin/Lake have seen a boom in housing without the guarantee of transit improvements in the pipeline).

The point is to illustrate the comparative ROI, assuming that economic activity per $ of development is the same in either scenario (a fair assumption to make). It’s obvious that an enhanced bus provides a much better bang for the buck over both the starter and full streetcar lines.

I say this not to whittle down the amount we spend on transit. I say this to propose spending similar amounts on other corridors. For reference, the combined capital cost of all the Metro Transit Arterials under consideration (in $2013 relative to the Nicollet-Central corridor analysis) is $470 million, and would serve over 170k weekday riders. Is there a document that compares the benefits of providing ~20% faster and (typically) more frequent service to these people vs. the cost of one 9.2 mile, $393m streetcar corridor?

Other Opportunities and Questions

A few other quick thoughts regarding this corridor that I either didn’t ask the staff or couldn’t get an answer to:

We need to be asking our leaders these questions (among many more). We should challenge the total possible benefits of the investments we’re making and how they’re implemented. In the end, my takeaway is that $94 million is the basic cost to provide people along this entire corridor the dignity of being treated humanely when waiting for transit with appropriate shelters, information, time-reductions, and ADA-accessible boarding (all VERY important things), while improving mobility a little through slightly speedier service. Anything above that is an amenity “easy to quality, difficult to quantify” attributed to things like ride quality and development potential with a streetcar. This isn’t to say those things aren’t important or real benefits, just that the tradeoff of not funding other corridors, businesses, and people may not be worth it.

Agree with me? Don’t? Let the project team know by this Sunday (the site says Friday the 15th, so Sunday the actual 15th should count!) so they can make informed decisions on what to consider for the project moving forward.