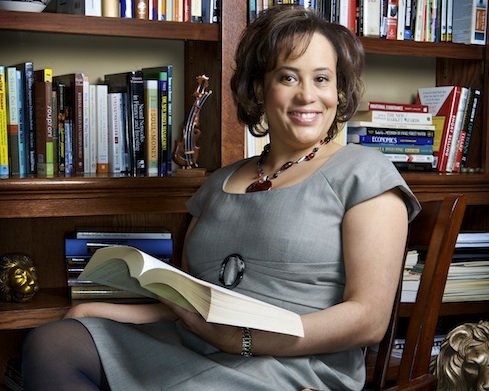 We live in an age of the fishbowl. We write about details of our lives on social networking sites, post pictures of ourselves and our family members, and document what we see, hear and experience. We’ve heard the horror stories of embarrassing Tweets or Facebook posts that have gotten people into trouble, but what about when you get someone else in trouble? What if you post a picture that inadvertently gets someone in hot water at work or with their family or friends? Or tweet what someone said when they didn’t know they were speaking “on the record?” In this new world, it’s as if we are always susceptible to being documented, and that poses problems in many different realms, including academia.

Duchess Harris, professor of American Studies at Macalester College, has fewer students on their phones during class than might be the case at a larger university. Her classes are capped at 25, and the small size prevents that kind of behavior. Last year, however, a student decided to use Twitter during a class discussion.

The student wasn’t tweeting Harris’s lecture, but rather the remarks made by her fellow students. Their comments were tweeted in a belittling or demeaning way. Though she was unaware of it during the class, Harris overheard the student talking about the tweeting after class, which led Harris to find the offending tweets. She found this particularly alarming because she takes pains to make sure there is a space of trust in the class, where students can feel safe to talk openly.

“There’s a generation gap where this generation doesn’t understand the line between confidentiality and public space,” Harris said. Students at Macalester, who are mostly between the ages of 18-22, are from a high tech generation. “People share so much, there’s no sense of what’s not inappropriate,” she said.

After the incident, Harris sent a note to her students, telling them that tweeting was not allowed, and she plans on adding that warning to the syllabus. Afterwards, someone brought up to her an analogy that some people who go to church tweet what the minister says. For Harris, that’s not an accurate analogy: tweeting a classroom discussion is really more like going to a prayer group and tweeting the prayers of individuals.

Harris began at Macalester in 1994, before most students had laptops or cell phones. Since that time, she’s found students have grown less focused, but she has a higher threshold than some of her colleagues for students checking their messages during class.

Harris has even incorporated some elements of social media in how she connects with students. For example, about four years ago she realized that when she emailed her students, they often wouldn’t check their messages. So each year she has a senior in the department set up a Facebook group for her classes where she can post articles and updates.

While Harris believes there a role for social media in college education, “there needs to be a sense of what’s appropriate.” For example, she’s not personally friends on Facebook with her students. “This generation struggles with what a friend is,” Harris said. “In the cyber world, people you’ve never met are your friend. I’m your professor, I’m the chair of the department — I’m not your friend.”

Be sure to check out a related article Phones in the classroom: Yay or nay? and let us know your thoughts below!