As he drove around Northeast Minneapolis with his pregnant wife, Michael Rainville wondered if starting his family there made him a bad husband.

At the time, in 1995, the city’s all-time high of 99 murders had earned it the nickname “Murderapolis.”

Through the window of his car, Rainville suddenly saw a 300-pound man “knocking the hell” out of a police officer. As he pulled over to help, his wife turned to him.

“And we’re going to [find] a house in the suburbs.”

Rainville, a fifth-generation resident of Northeast, stopped the car and helped the officer. He and his family decided to stay.

Since then, Minneapolis has lost its damning nickname, and Northeast in particular has seen

significant growth. According to Rainville, the artists in the community can be thanked for that.

“The arts community stabilized the area,” Rainville said. “I saw this tired blue-collar neighborhood on the way down come around.”

Originally the neighborhood was full of functional factories and the workers’ families, but as those factories became abandoned in the 1980s, the families moved on too, leaving more room for crime.

But with low rent and warehouses open for studio space, a common phenomenon happened-artists moved in and revitalized the industrial neighborhood, said University of Minnesota urban studies professor Brenda Kayzar.

Studios opened up, people began to move back and soon small businesses started to repopulate the streets.

But with this kind of trend comes a sad ending. As property values increase with new growth, artists eventually get pushed out with higher rent prices. 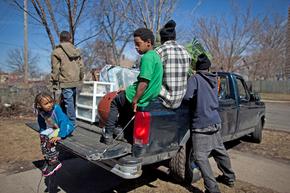 To prevent this from happening, as it already did in the city’s Warehouse District, the artists formed an association and strategic plan in 2002 to prevent the gentrification.

The Northeast Minneapolis Arts District and its street banners were established to promote awareness of the artists’ economic value, like how they bring in new residents and businesses. The Art-a-Whirl event, for example, brings in up to 50,000 visitors a year, Kayzar said.

But with a lack of funding from the city, the plan hasn’t been fully utilized, Kayzar said. Low-income housing for artists has been hard to finance, and many building owners haven’t promised to keep rent low or offer opportunities for artists to own their studios.

With the economic downturn and poor housing market, artists have bought more time in the neighborhood, but some still can’t imagine Minneapolis protecting the arts district after the recession eases.

“It happens to every single art community that ever existed,” said artist Calvin deRuyter, who works out of the Northrup King Building in Northeast. “Why would we be any different?”

DeRuyter said he has high hopes but predicted the community will need to find a new home in 10 or 15 years.

“When you mention the Northeast, there are still people in the Cities who practically turn pale in the face from fear,” deRuyter said with a chuckle. “[But] I think artists have made a big stride in pulling people into the community and saying it’s safe here.”

Danielle Nelson and her 6-year-old son Leif said they feel safe in the area and enjoy spending days exploring the arts district that’s in their own backyard.

“I love my neighborhood,” Nelson said of the community she’s lived in for 15 years.

However, down Jackson Street in the residential neighborhood near the arts district, some struggle to embrace that sense of security.

She’s been awakened by neighbors on several late nights, including a time when one reported her roommate had a knife and was threatening to kill her.

But Boeser said she has seen efforts to improve the area, particularly with the art culture she gets the chance to experience.

“I don’t think we’d ever move from here,” she said as she prepared to paint her house. “Seems strange that I’m saying that, but I don’t think we would.” 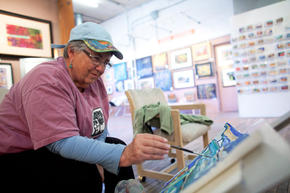 Fears for the future

While artists have outlined their hopes in the Art Action plan, residents have their own set of concerns about the future of Northeast.

Boeser said she would like to see less garbage around the neighborhood, and another neighbor said there needs to be more community outreach.

“There haven’t been as many changes as I would’ve liked,” said Boeser, who would like landlords to fix up neighboring houses.

She said the problem is due to both funding issues and a lack of motivation by community members, but hopes the attention provided by the arts community will bring more inspiration.

While Boeser and the arts community has made commitments to the area, Marvina Hayes, who lives across the street from Boeser, said she didn’t see how the artists were making much of a difference. In fact, Hayes said she is moving from the area in hopes of finding better opportunities for her family.

“I’ve been here for four years,” the single mother of three said in front of a pickup truck loaded with mattresses and kids toys. “I need a change.”

Perry Ingli, an active member of the Northeast arts community, countered that the arts community has made a difference, bringing new life and business to the area.

“If all the artists were to leave here, the Northeast would feel it,” Ingli said. “When you go out in the suburbs, it’s boring as hell. There’s no culture there.”