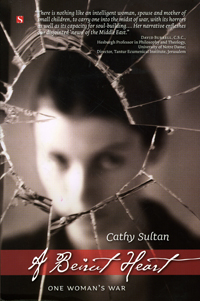 Most of us find it hard to imagine walking a dog in a war zone, along boulevards littered with burned-out cars and past buildings shattered by bombs and street corner tanks. Or sending our children to school if there’s a chance the school could be bombed. It’s difficult, if not impossible, to imagine living with the specter of your own death every day.

But this is what “normal life” is like now in places like Iraq and what life was like in Beirut, Lebanon, during the late 1970s and 1980s, when the country was racked by civil war.

During much of that time, Wisconsin author Cathy Sultan lived with her Lebanese husband and two children in a top floor apartment just two blocks off Beirut’s infamous Green Line, which divided East and West Beirut.

Sultan’s new memoir, A Beirut Heart: One Woman’s War, recounts the eight years the family lived in Lebanon and provides a compelling and intimate look at family life in wartime and an examination of what it’s like to love a place, and a way of life, with a stubbornness that may seem beyond reason.

A native of Washington, D.C., Sultan moved to Beirut with her physician-husband and two small children in 1969. She was greeted by pristine beaches, turquoise water, sparkling marble buildings and a cosmopolitan, European culture. The city embraced her like a lover, Sultan recalls. It wasn’t until six years later, in 1975, that her lover turned violent.

Over the next few years, not unlike a battered woman, Sultan sought again and again to make excuses for her lover’s behavior.

“You endure the bullets that fly through your windows, even three-inch ones that land in the kitchen sink from which you just stepped away. You ignore the bullet hole in the apron you took off and hung behind the kitchen door. Your sanity demands you pretend the bullets are wasps, nothing more than nuisance wasps that sting, not kill. You take precautions but sometimes they’re not enough, and you die.…”

“Your love affair with Beirut affects your judgment in totally irrational ways and, as in any unhealthy relationship, you asked to be fooled.”

Fooled that a temporary cease-fire could become a permanent peace; fooled that a leader will emerge to unite the country; fooled that you will once again be able to stroll the boulevards and sip coffee in the cafes; fooled that the guns and bombs exploding around you are normal.

“During the peaceful times when everything went back to something we could call ‘normal,’ I was still totally mesmerized by my city. I often refer to it as being like a love affair with someone who was completely out of his mind. But there were so many times when it was a joyous place. That is why I fell in love with it in the first place, and why I stayed.”

But again and again, Beirut would break Sultan’s heart, and finally, her will.

Throughout the book, Sultan describes events with the detail of a documentarian and delivers them in a matter-of-fact prose that makes them seem all the more chilling. One of the most harrowing days was April 15, 1981.

That day, the bombing started around noon, while Sultan was putting the finishing touches on a lunch of coq au vin. She ran to the balcony and saw billowing clouds of gray smoke near her children’s school. Sultan raced to pick up her son and daughter and the neighbor’s two children. With all four kids in the car, she made a break for home.

“What I saw in my rear view mirror was strange; it looked like the road itself was erupting. At first there was just a very small shimmer, and when I glanced back again, everything behind me appeared to explode into the air. I pushed harder on the accelerator….I thought the third explosion, which seemed to be right behind us, might actually lift the car off the road.”

Two years later, Sultan and her then 16-year-old son and 15-year-old daughter left for the United States, ostensibly on vacation. A few weeks into their trip, war broke out again and they prolonged their stay. By the following spring, it was clear that returning to Beirut was not an option and Sultan, her husband and their children moved to Wisconsin to settle. Sultan still resides with her husband in Eau Claire. She sits on the board of the National Peace Foundation and is active with the peace group Women in Black.

Reading Sultan’s descriptions of daily life in Beirut, one can’t help but draw parallels to the U.S. war in Iraq, a war most often reported in body counts and daily bombing tallies, rather than in the everyday indignities and violence suffered by its citizens. A Beirut Heart puts a human face on war and on those caught in its bloody grip.