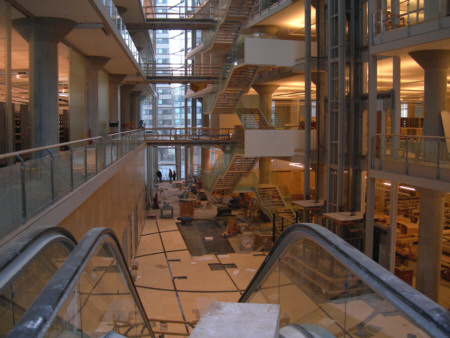 The new Central Library in downtown Minneapolis opens in just two weeks, but some community members are already worried that the city’s cash-strapped library system will not have enough funds to operate the new building.

In 2000, voters approved a $140 million referendum to complete the Central Library and to improve the other Minneapolis community libraries. However, these capital funds cannot be used for things like librarian wages and buying books.

According to literature put out by the private library-advocacy group The Friends of the Minneapolis Public Library, Local Government Aid (LGA) allocated to the library system for operations has decreased while the increase in property tax revenues have been more heavily distributed to city services and the Park Board.

In an interview Friday, Mayor R.T. Rybak compared the contradiction to buying a new house. “It’s like buying a brand new house but not having enough money to operate it and maintain it,” he said.

Since the library relies on LGA and property taxes for more than 90 percent of its operations budget, it is hit harder by the decrease in LGA funds. The parks and the city have more varied sources of revenue—from parking, water, sewers, solid waste, and other sources such as the sale of park passes.

The result is that branch libraries since 2004 have cut their hours by 35 percent, fired 25 percent of library employees, and spent less money on new books and technology. And according to Friends of the Minneapolis Public Library executive director Colin Hamilton, the fact that capital campaigns are well funded while the system’s operations budget is suffering is precisely why the opening of the new library is so complicated for the public to understand.

“We’re all thrilled about the new library,” he said. “It’s going to be a wonderful addition to the city. But it’s not the source of the problem. What’s changed is the amount of funding for operations has gone down.”

According to city finance director Patrick Born, until the 1990s LGA was growing faster than property taxes. However, recently LGA has declined. The current agreement for distribution of LGA, made in 1994 by the city council, distributes 80 percent of LGA to the city’s general fund, and roughly 12 percent to the parks and 8 percent to the Minneapolis libraries.

“Local Government Aid has either been cut or declining, and it’s more restrictive for the library than the Parks Board or the city’s general fund,” Born explained. But changing that allocation formula would hurt the city and the parks.


Rybak said he realizes the need for more library funding but argued that the situation is not as simple as misallocation. “The big issue is that we need to find a way to find more funding. There is no magic formula,” he said. “The issue should not be about how we are going to fight over pieces of the pie. The issue is that we need a bigger pie.”

Hamilton agreed that an increase in overall funding is necessary but said that the current library budget is not sufficient. He wants the current budget to be shared more equitably until a larger “pie” is acquired. “What we’d like to see happen is rather than simply maintaining percentages, we’d like to look at the combination and reassess,” he said. “LGA and property taxes are always growing and shrinking at different rates so consequently our budget is growing and shrinking. What we’d like to see is a link to the total [city] budget.”

One idea Rybak proposed to solve the funding dilemma is to create a regional partnership by extending the Hennepin county sales tax proposed for the new baseball stadium to a multi-county tax which would fund things such as libraries and transportation.

On April 26, the House of Representatives voted to pass the Hennepin County sales tax for the stadium. But that bill has been amended to include a metro-wide sales tax that would fund both the Twins and Vikings stadiums as well as transportation projects. Library funding is not included in the current version, which is scheduled for Senate debate before the end of the week.