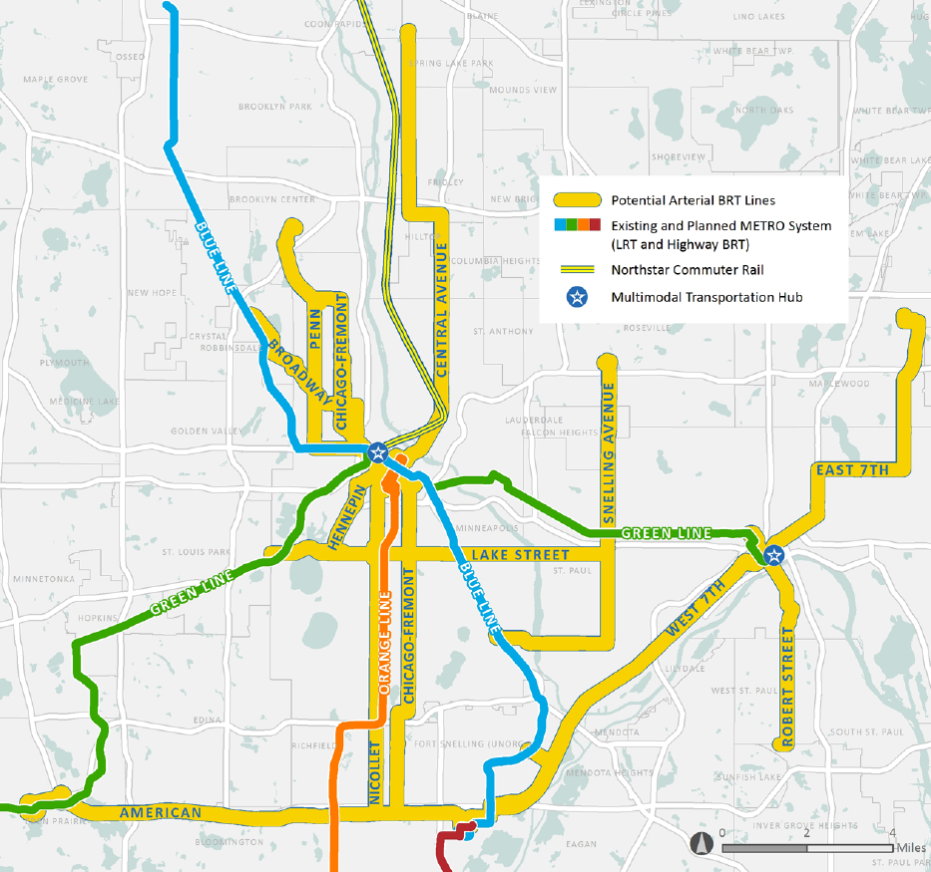 I’ll start by saying I have strong feelings about Southwest LRT. So do some people on this very blog. You probably do too. However, I won’t be contributing further to the gallons of spilled real and virtual ink or weeks of public testimony. I’d like to talk about how we can set the stage for some other projects that could be really beneficial for transit-dependent and transit-interested communities. Nothing in this post should be interpreted as diminishing the importance of that LRT project, the upcoming decisions that will determine it’s fate/depth of its tunnel, or the correctness of any particular opinion about it. But I have this urge to start some positive conversations about other projects that need some support. Weird, right?

One way or another, that one LRT project will probably get built, probably between some lakes. It is estimated to serve 7,250 Minneapolis customers daily in 2030 (about 12,000 if you count transfers from the Green Line, and over 27,000 total daily trips over the entire length). The Hennepin Avenue corridor (Route 6/12) between downtown and Lake Street served about 11,000 customers daily in 2010. With a few tweaks to service and some nicer stations, it might serve 23,000 daily in 2030, and have 17% faster travel times than current (this assumes Metro Transit’s arterial BRT concept). Similar improvements on the Chicago-Fremont corridors might serve over 23,000 daily customers in 2030 (15,600 daily riders in 2010). The costs of these projects would be rounding errors when compared to that other project I promised not to talk about. In fact, we could build one or two every year for the cost of inflation of the project whose name I do not speak.

Additionally, these projects can be built in years, not decades. Metro Transit completed it’s Arterial BRT study in 2012. The first line chosen, Snelling, will open in 2015. No multi-year alternatives analysis, no haggling between three or four levels of government (mostly), and a much more modest funding ask. Booming populations in Uptown won’t wait a decade for transportation options. They’ll buy a car or move. Communities desperate for faster and better transit across the city(ies) can’t wait a decade for better transportation. They’ll lose job opportunities. We can’t afford to make incremental progress on vehicle emissions over decades.

So I’m saying, let’s be pro-transit. Imagine how much we could get done in a decade with a united voice calling for better transit in our busiest corridors? Over 30,000 new transit customers could be served (and travel times for existing customers significantly improved) with improvements to just these corridors. The total cost would likely be less than half of one new light rail line.

Of course, it wont’ be easy. Just because it sounds (relatively) cheap, it won’t happen automatically. Those interested in transit should be calling on Metro Transit (and their local elected officials) to be building two, three, or four of these lines at a time. The current arterial BRT plans can probably be improved too. Dedicated right-of-way should really be a high priority, especially with ridership numbers rivaling or beating rail projects. Stations (why even say stops?) should have train-like amenities. Finally, bus projects don’t grab headlines like shiny new trains, so the case will have to be made to prioritize, repeatedly.