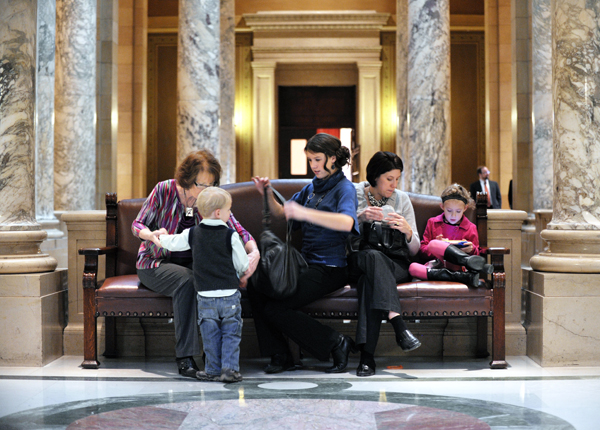 The first day of the session is a rite of passage. Hundreds of newcomers braved frigid temperatures to witness a family member or favorite lawmaker sworn into office while lobbyists and activists showed up at the people’s house Jan. 4 to stand up for their priorities. As the 2011 session begins, here are some concerns heard in the hallways of the State Capitol and a sprinkling of advice for members.

Advice to the body: balance the budget

Christine Flug of Eagan watched from the House Gallery as her sister, Rep. Diane Anderson (R-Eagan), took the oath of office. Flug considers herself a nonpartisan voter, even with a sister in office. “Oh yes, she and I have prolonged discussions.”

Flug advises legislators to first figure out how to balance the budget.

“I cannot not balance my budget. I truly would appreciate if they would balance theirs,” she said. “Just because it’s a good thing doesn’t mean you can afford it.”

The projected $6.2 billion state budget deficit was also on Chuck Carlson’s mind. He drove from St. Peter with his daughters, Alyce, 15, and Cori, 11, whose letter to the editor decrying negative campaign tactics was published by the St. Peter Herald.

“Learn how to compromise and start thinking about how to get some revenue,” advised Carlson, a security counselor at the Minnesota Security Hospital. The long-time state employee admits there is room for greater government efficiency, but said that’s not enough to fix the budget crisis. He supports higher tax rates for upper bracket incomes.

Growing jobs in the nearby Frogtown neighborhood was on the agenda of activist Johnny Howard. His advice to legislators on how to achieve that goal?

“I’m as clueless as they are,” Howard said. “We will probably have to raise some taxes to help pay for some of this.”

No matter how the deficit is rectified, Flug and others want finality. “No more excuses,” she said. “Honestly, fix it or get out.”

Republican leaders are riding a wave of hope that they’ll be able to fix the budget deficit, trim government costs and make government more efficient, while promoting job growth in the private sector. While those themes resonate with many, Chuck Carlson, for one, issues a caveat:

“People that don’t like government don’t understand government,” he said. “What they look at, walk on, drive on is funded by government. Government equates to quality of life. What a citizenry is willing to pay for dictates what their quality of life is.” 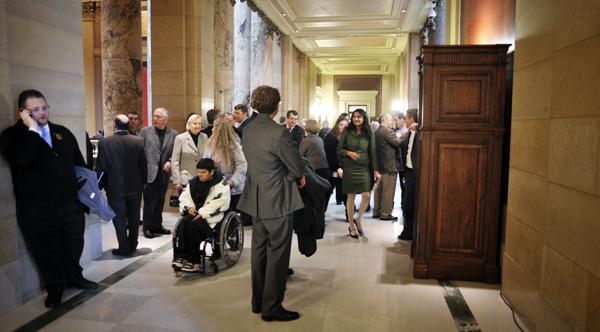 Few onlookers would predict the session’s outcome, and those who did were realistic about the slim prospect of new funding for their priorities.

Fifteen members from The League of Women Voters Minnesota were present to connect with their district lawmakers.

Sherri Knuth, the group’s public policy coordinator, said voters’ rights are forefront in their minds. “We don’t want to separate citizens from the ballot box.”

Like many, she hopes this session will begin a new era of bipartisanship. “That is not a prediction, though,” she added.

“I don’t think we can predict anything,” echoed Patty Lammers of St. Paul, a lending programs manager with the Greater Frogtown Community Development Corporation.

“We recognize we aren’t going to get additional funding for most of our priorities,” such as affordable housing, said Lammers, who had campaigned for newly elected Rep. Rena Moran (DFL-St. Paul).

Virginia Weldon, an unemployed St. Paul resident, demonstrated on the Capitol steps urging lawmakers to end the 60-month lifetime limit on Minnesota Family Investment Program eligibility, “‘cause there’s no jobs out there.” She also hopes last year’s changes to General Assistance Medical Care that eliminated dental and eye care coverage will be reversed.

Weldon and about 20 other people organized by the Welfare Rights Committee and the Minnesota Coalition for a People’s Bailout stood on the Capitol steps on the first day of session for the 18th consecutive year, many carrying placards bearing statements such as “Tax the Rich.”

“I’m hopeful they will allow us greater flexibility at the local level to do more things,” Schneidawind said. “Let the marketplace work.”

Because K-12 education comprises about 38 percent of the state budget, it might seem a prime target for spending cuts Republican lawmakers are likely to propose as a way to balance the state budget.

Districts have already cut costs and are preparing to slice more and do more borrowing, Schneidawind said. He hopes that budget-cutting measures will not include making last year’s nearly $1.9 billion aid payment and property tax recognition shifts permanent. “It’s important (legislators) understand their duty to provide a thorough and efficient public school system. All they need to do is talk to their local school boards to understand the impact that would have.”

Or go home in the case of House Speaker Kurt Zellers (R-Maple Grove).

His wife, Kim, is an elementary school teacher. “I want what’s good for kids in education and hopefully we can get a balanced budget,” she said, tending to the couple’s young children in the Retiring Room.

The Minnesota Chamber of Commerce hopes to build upon last year’s advances toward a more business-friendly regulatory environment, according to Tony Kwilas, the chamber’s environmental policy director. Shorter timelines for approving or denying agricultural permits were passed in 2010, and Kwilas is optimistic that similar legislation will occur for environmental permitting.

Robert Halfhill found a prominent position in front of the House Chamber, where he held a sign advocating gay marriage legislation, but he’s realistic that it won’t happen this session.

“The DFL wouldn’t give us a real hearing. … Republicans may introduce a bill declaring that marriage is between a man and a woman. So we need a third party,” Halfhill said.