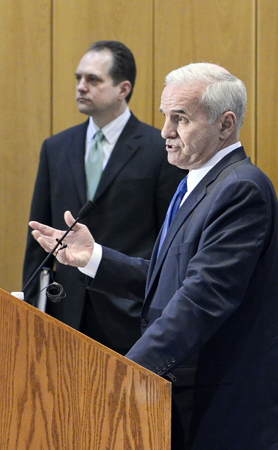 DFL and Republican lawmakers had very different reactions to Gov. Mark Dayton’s $37 billion vision for the state’s budget – what he terms a plan to preserve government services by raising taxes on the wealthy.

At a Feb. 15 press conference, the governor outlined his solution to the state’s projected $6.2 billion budget shortfall. His plan focuses on protecting cities, counties and school districts from budget cuts, and prioritizes programs for the sick and the vulnerable.

“My budget represents my values and priorities,” Dayton said.

The key to his plan is a package of tax increases – some permanent and some temporary – that would raise more than $4.1 billion in new revenue over the next two fiscal years. To bridge the remaining gap, he proposes $1.9 billion in cuts from forecasted spending, largely from health and human services programs.

“To the employers and employees across the great state of Minnesota: don’t worry, we’re here for you. We are not going to let Mark Dayton tax your job out of our state,” he said.

Meanwhile, DFL leaders hailed the governor’s plan as a “fair and progressive” approach to the state’s budget challenges, and said it’s fair to ask the wealthy to pay more taxes to protect essential services.

“More and more money has been coming out of middle-class pockets with rising property taxes, tuition and fees … while Republicans are busy finding a way to protect the richest Minnesotans from sharing in this budget solution,” said House Minority Leader Paul Thissen (DFL-Mpls).

The release of the governor’s budget plan, which is required by state law, marks the beginning of the budget process at the Legislature. In the coming weeks, lawmakers will dissect Dayton’s budget plan and put together their own counterproposal.

The governor acknowledged the long and difficult process of negotiation that is to come.

“This will not be the budget finally enacted by the Legislature … I recognize that,” Dayton said.

So far, it may be the only point on which there is general agreement.

Thissen and Senate Minority Leader Tom Bakk (DFL-Cook) said they support the underlying principles of Dayton’s budget, but would not commit to voting for the entire plan.

“At the end of the day, what we need to do is compromise and reach an agreement,” Thissen said.

If history is any lesson, compromise is easier said than done. Republican leaders said they absolutely would not compromise on the issue at the heart of the debate: raising taxes. They argue tax increases would stunt economic growth, and said the state should have to live within its means.

“The private-sector economy, when it’s thriving, will produce more revenue for the state,” Zellers said.

Dayton said 95 percent of Minnesotans would see no tax increase under his plan, which only affects the state’s top income earners. Moreover, he said history shows that the alternative – cutting funding to schools and local governments – would only lead to property tax increases that would impact low- and middle-income Minnesotans.

“This is about restoring tax fairness in Minnesota, and it’s about asking our most affluent citizens to help us out during this time,” he said. He challenged those who oppose his plan to justify making deeper cuts just to protect the wealthy from tax increases.

But Republicans said the wealthy aren’t the only ones that would be impacted. They note that some of the state’s small businesses, because of the way they file their taxes, would be ensnared in Dayton’s proposed new top income tax tier.

Thissen said the issue is not so simple, and said that under former Gov. Tim Pawlenty, taxes in the state went down, but the state suffered economic decline anyway. In the end, he said Minnesotans would have to decide what’s best.

“We can put Gov. Dayton’s budget up against the Republicans’ all-cuts budget, and Minnesotans can make an informed decision about which direction we need to head,” he said.