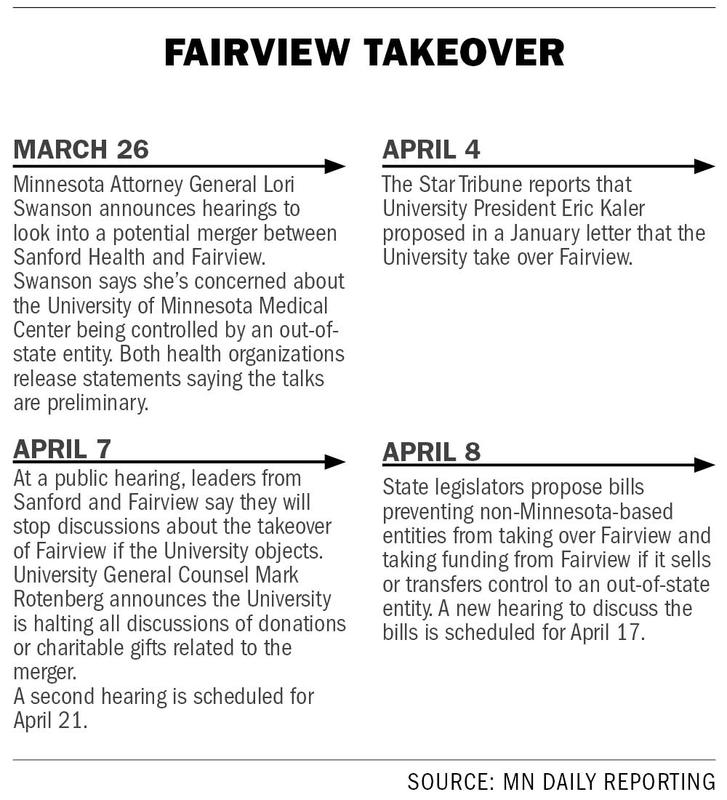 Two proposals would outlaw South Dakota-based Sanford Health from taking over Fairview, which includes the University of Minnesota Medical Center. Another would force Fairview to return state funding if it was run by an out-of-state entity.

Two bills proposed by Reps. Joe Atkins, DFL-Inver Grove Heights, and Dan Schoen, DFL-St. Paul Park, would outlaw the acquisition of Fairview by an out-of-state entity, either permanently or through 2014.

Another bill, introduced by Jim Abeler, R-Anoka, and Peter Fischer, DFL-Maplewood, would take state funding from Fairview if it sells or transfers control to an out-of-state entity.

The bill says Fairview would have to return any “charitable assets” it received from the state back into the general fund.

“Minnesota money and the goodwill of non-profit benefits have been poured into Fairview,” Fischer said in a news release. “I don’t think we should walk away from all the state has invested.”

Atkins said the potential merger doesn’t take into account how much the state has invested in the education of physicians at the University.

“We ought not to be turning over the reins of control for the University of Minnesota hospitals to an entity that is based outside the state of Minnesota,” Atkins said.

In a letter Monday, Atkins asked acting Fairview CEO Chuck Mooty to testify before the House Commerce and Consumer Protection Committee at an April 17 hearing for the bills. University President Eric Kaler was also invited.

The committee is charged with examining transactions with major impact on Minnesota consumers and with providing legislative oversight of the state’s charitable and nonprofit entities.

Legislators from both sides of the House floor have raised concerns about the potential merger’s effect on University hospitals, Atkins said.

“University of Minnesota hospitals provide the greatest amount of training to the greatest number of physicians in any institution in Minnesota,” Atkins said. “That is critical to the entire state.”

The potential Fairview-Sanford merger came to light last month when Minnesota Attorney General Lori Swanson expressed concern about the talks and scheduled a series of public hearings to discuss them.

In a January letter to Mooty, Kaler proposed the University, rather than Sanford, take over Fairview.

In the first hearing about the merger Sunday, the University announced it would halt gifts and donations connected to the merger talks, and both Fairview and Sanford leaders said they would stop discussions of the takeover if the University objects.

Fairview received notification of the new legislation Monday morning and will follow up on it soon, Fairview spokeswoman Jennifer Amundson said.