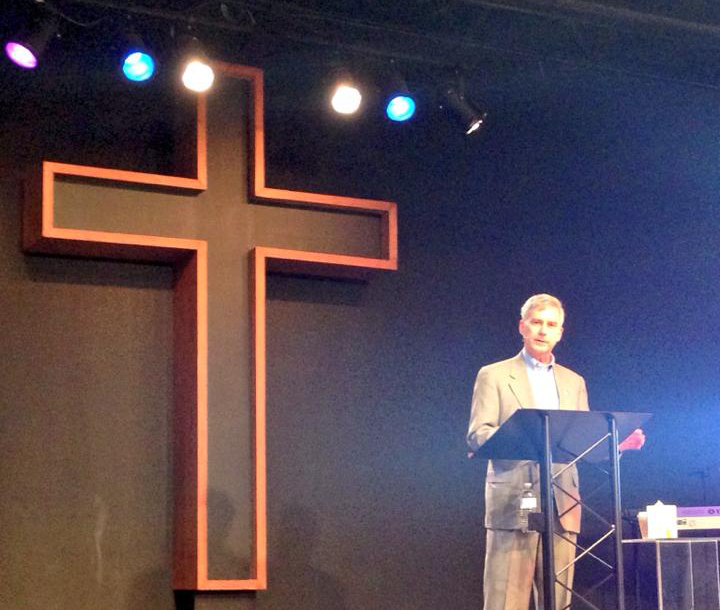 Republican lawmakers are partnering with the Minnesota Family Council to rally opposition to a bill that would address bullying in Minnesota schools.

The Safe and Supportive Minnesota Schools Act promises to be one of the most controversial topics at the Minnesota Capitol this spring. The bill would beef up Minnesota’s anti-bullying laws which are currently regarded as some of the weakest in the nation. But while the bill has rallied a large coalition of mainstream religious, civic, cultural, and service organizations, the religious right and Tea Party groups have been rallying against it.

And now key Republican lawmakers are rallying support against the bill, in large part due to religious objections to including LGBT students in the bill.

Sen. David Hann, a Republican from Eden Prairie, traveled well outside his district on Feb. 9 to keynote an event at the Christian Family Church in Owatonna titled, “Can Public Policy be Informed by Faith? A Perspective on Legislating Student Behavior.” The event was billed as one to “help attendees learn what they can do to help stop the Bullying Bill and be involved in the legislative process.”

According to the Owatonna People’s Press, Rep. John Petersburg, a Republican from Waseca, will hold a town hall meeting on Feb. 20 at Miller Armstrong Building from 6 to 8pm, “There will also be a presentation from the Minnesota Family Council on proposed Anti-Bullying Legislation,” the paper notes.

The Minnesota Family Council is also promoting a series of events by the Minnesota Child Protection League including one at the Southwest Little Theater in Albert Lea on Feb. 11, at the Hibbing Memorial Building in Hibbing on Feb. 13, and the Lincoln High School Commons/Cafeteria in Thief River Falls on the 13th.

“Our concern is that the bill really goes beyond addressing the bad behavior of bullying to trying to reeducate and shape the thinking of 10 year old children on sexuality and family structure,” Tom Prichard of the Minnesota Family Council said according to Northland News Center.

Republican lawmakers have also been trying to drum up opposition among their constituents via email updates.

Rep. Jeff Howe of Rockville wrote, “I believe that with clarification of existing laws we can avoid this very costly unfunded mandate and allow our elected school boards to remain in control of our schools.”

Rep. Ernie Leidiger of Mayer criticized the DFL’s “Bullying bill that takes away local control from schools and parents, and grows government in St. Paul.”

“Dear Neighbors,” wrote Rep. Linda Runbeck of Circle Pines. “[A] bill that’s a top agenda item for the “politically correct” should not be considered a priority in this ‘unsession.’ It’s the bullying bill” which she said “is being pushed hard by special interests and is an unfunded mandate that is unnecessary, excessive and contrary to good parenting practices.”

“Next session, the legislature is likely to take up a bill related to bullying. It’s likely to be a one-size-fits-all solution that won’t do much to address the fundamental causes of bullying, but rather increases bureaucracy and spending at the Minnesota Department of Education. I believe school districts and local communities are best equipped to tackle the bullying problems in our schools — not the state government.”

Republicans have also taken to local newspapers to build opposition to the bill.

Rep. Glenn Gruenhagen of Glencoe, who has been a long time opponent of LGBT equality,penned a piece for the New Ulm Journal condemning the bill with “facts.” Specifically, he is concerned that Christians will be labeled bullies for claiming that same-sex marriage is illegitimate.

“But this bill is less about bullying and more about increasing power and bureaucracy at the Department of Education, and pushing an unfunded mandate on our schools. I wanted to share with you some facts you probably didn’t know about this bill and its impacts here in Minnesota.

7.) Bullying definitions lack clarity
Students come from a wide variety of faiths, cultures, and backgrounds. What may be an honest expression of a religious or cultural belief from one child may be seen as offensive to another child. For instance, if a child raised in a Christian household states that they believe marriage is between one man and one woman, it may result in another child taking offense to that, and could be filed as a bullying complaint.”

In November, Rep. Kathy Lohmer echoed the same sentiment in the Stillwater Gazette:

Furthermore, the application of what defines “bullying” isn’t clear. With students raised in different cultures and faiths, what may be an honest expression of a belief shared by a student based on family upbringing may be considered offensive enough to constitute bullying to another. Yet, with no requirement that parents be notified if their child is accused of bullying, what recourse do parents and students have? Education requires the free exchange of ideas without fear of persecution. Parents should not be sidelined in that process.
As parents, it’s heartbreaking to have a tearful child come home from school overwhelmed and embarrassed to return to school the next day because of the taunting of others. But it is also wrong to bully a child into silence or violation of his or her own conscience in the name of an “anti-bullying” policy.

Even Rep. Michele Bachmann, who is retiring this year and who wouldn’t be voting on the measure anyway, said roughly the same thing in a tweet last month: