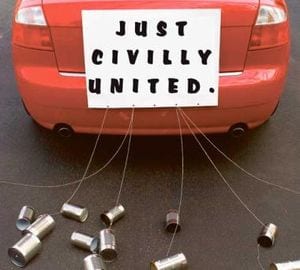 By this point in the game, it’s surprising that the Republican Party of Minnesota hasn’t hired a Chris Crocker wannabe and had them upload a “Leave Tim Emmer Alone” video. After all, Target’s gay problem keeps getting worse‎ the City Pages reports.

Tom Emmer’s poor record of LBGTQ policy sparked the boycott threat, and so the Republican Party of Minnesota and its social media minions scurried to point out that Emmer holds the same position on gay marriage as President Obama and Elton John.

According to the White House, Obama favors civil unions:

From the White House Web site: President Obama supports full civil unions that give same-sex couples legal rights and privileges equal to those of married couples. Obama also believes we need to repeal the Defense of Marriage Act and enact legislation that would ensure that the 1,100+ federal legal rights and benefits currently provided on the basis of marital status are extended to same-sex couples in civil unions and other legally-recognized unions. These rights and benefits include the right to assist a loved one in times of emergency, the right to equal health insurance and other employment benefits, and property rights.

Is that Emmer’s position?

Probably not. A review of the legislative scorecard kept by Outfront Minnesota and the “Legislative Efforts” of Project 515, named for the 515 state laws that discriminate against LBGTQ families based on marriage suggest that Tom Emmer doesn’t share the president’s positions and voted against other gay-friendly measures.

In fact, Emmer voted against the favored position on every key vote selected by Outfront:

An amendment to the constitutional amendment to remove the language banning the “legal equivalent” of marriage thereby allowing for some form of legal recognition for same-sex couples.

Floor vote on a constitutional amendment to bar all legal recognition of same-sex couples including marriage, civil unions, and domestic partnerships.

A vote to allow employees leave of absence to care for a member of the employee’s immediate household.

A bill to allow local governments to offer domestic partner benefits and benefits to other family members of their employees. The bill passed the House on May 15th, 2008.

This legislation would strengthen protections for unmarried couples by expanding the information given to health care agents in Minnesota.

The Safe Schools for All Bill prohibits discrimination and bullying for GLBT students and their families and includes protection based on, but not limited to race, color, creed, religion, national origin, sex, disability, and other categories of the Minnesota Human Rights Act.  The bill passed the House 95 to 39.

Some of those votes put Emmer at odds with the president. And the Project 515’s metric? One bill came up for a vote:

How did Emmer vote?  He voted against the Final Wishes bill. Yeah, that’s equality.