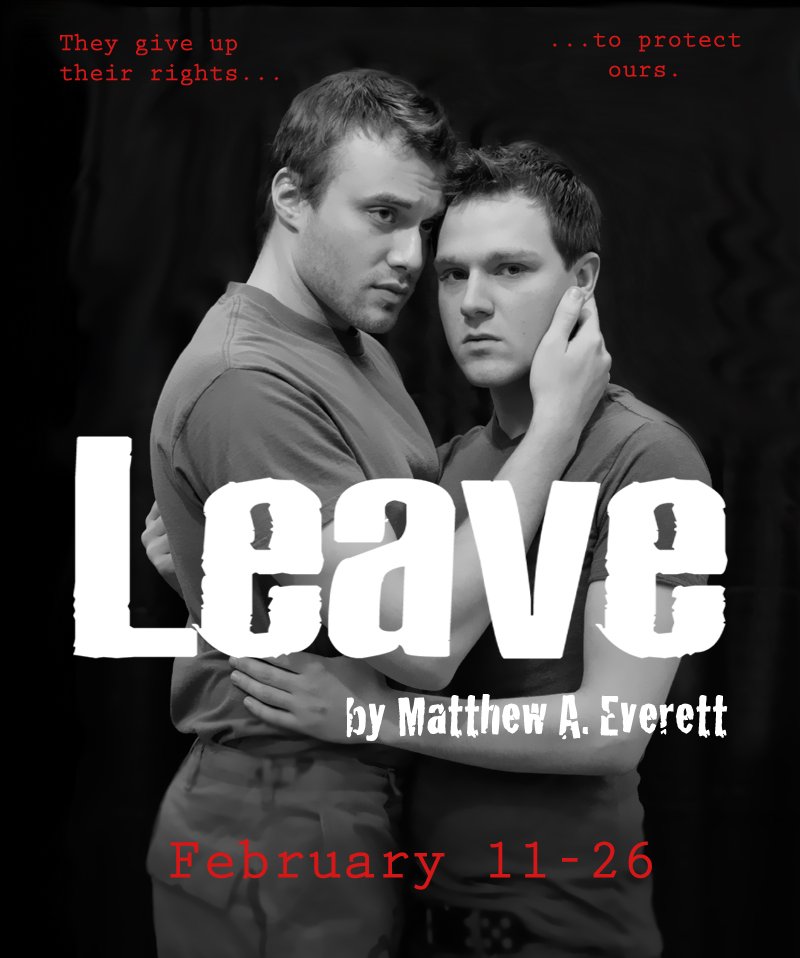 This is a challenge of a slightly nebulous title. Sometimes it’s a little too open to interpretation.

My play “Leave” – about the emotional fallout of the “don’t ask, don’t tell” policy in the US military that was recently (finally) repealed – has a one word title that could be a noun or a verb or a command or all three, and could have to do with any number of things.

So advertising can get a bit dicey sometimes.

The one-act version back in 2008, the advertising featured just the word, in a fairly distressed looking font, and a couple of dog tags. The military subject matter was pretty clear.

The previous marketing image for this production had a couple of guys with short hair, wrapped up in an American flag. So, again, the military aspect was inferred if not explicit. (It’s still on all the postcards we have floating around.)

Naturally, the company wanted to use an image with actual cast members in it when it came time for the big marketing push after rehearsals began.

And given the natural beauty and attractiveness of the guys in our cast, it’s a no-brainer to want to couple them up in a shot in order to draw the attention of potential gay audience members.

You can see the image here, and above.

Neither of the guys had short hair, but they weren’t playing the military characters, so why would they? One was former Army, so he was dressed up in desert camouflage gear and they had a rifle between them.

Trouble was, when you make the image black and white, the camo element isn’t obvious anymore. The rifle is down low in the shot so it can be a little hard to make out.

The two guys are embracing, but given the subject matter of the play, they look a little distant and angsty.

And the one actor is shorter than the other, perhaps looks a little younger, too.

So somebody, seeing the poster, asked if it was about pedophilia.

Since they’re not in an unconditionally loving embrace, and the title is “Leave,” I also started to wonder if people would think it was about spousal abuse, too.

Bottom line, though, it’s a poster with two attractive guys with their arms around each other. For some people, that’s all they need to know.

Come for the cute. Stay for the story.

Whatever gets the meat in the seats, as they say.

And I do like the poster. I’m just wondering if my title is a little too withholding for its own good sometimes.

The world premiere of this newly expanded and updated version of “Leave,” from Urbran Samurai Productions and yours truly, opens this Friday at the Sabes Jewish Community Center. You can find all the pertinent information you might need at urbansamurai.org

If you see me there, even if I look a little nervous, come on over and say hello.