Photos courtesy of Learning in Style

Step into the freshly renovated haven on 22nd and Nicollet Avenue in South Minneapolis and you will find a bustling microcosm of the United Nations, with students of every age, hue, native tongue, learners tackling the English language, U.S. history, math, citizenship and the nebulous values of peace, justice and the American Way.

Teachers and administrators at Learning in Style have assumed another formidable task – to engage their 200 learners in Census 2010, the concept, the consequences, and most of all, the process. On every wall and flat surface is evidence that Learning In Style (LIS) has embraced the challenge of Census 2010.

The Census 2010 form is greatly shortened and simplified from earlier years. Just ten questions, easily answered in ten minutes, the classy promos assure U.S. residents. True enough, perhaps, if you can read and comprehend the language, if you find your ethnic identification in the limited number of categories on the form, if your household fits traditional parameters and if you’re not terrified of the landlord or government intervention.

At the national, state, county, city and neighborhood levels committed people are collaborating as never before to make sure that every U.S. resident gets counted, “Everyone” includes those who may be undocumented, incarcerated, homeless, non-English speaking, physically challenged or otherwise outside the mainstream.

At LIS, the staff is spending hours learning the intricacies of the Census and the support system committed to inclusiveness. They labor over lesson plans, listen to students’ concerns, and connect with the Complete Count Committees. 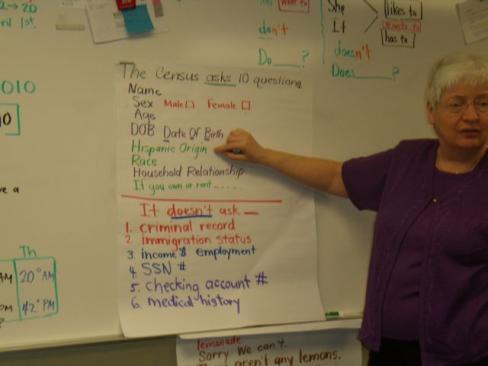 The power of these teachers comes less from lesson plans and more their students’ trust in “Teacher.” If Teacher says the Census is important, that there is help, that the government is not trying to ferret out undocumented residents, that you can get the Census form in any one of nearly seventy languages, that no one will knock at your door if you fill out the paper form, students heed and share the message.

Through the media, LIS students hear about the importance of retaining Minnesota’s Congressional seat, a political exigency of far greater concern to mainstream folks and political wonks. Teachers talk with them about child care, health services, public transit, foreclosures, what’s happening on the block, in the neighborhood, at the kids’ school and relate funding for those programs to the relentless effort to count everyone in every residence.

Teachers explain how elected officials will use those numbers for the next decade, and how they will make tables and maps and decisions based on individual households filling out those forms.

At Learning in Style learners from around the world ponder the “benefits” of Census 2010. The benefits are close to home – schools, libraries, hospitals, roads, parks, child care and what one woman sums up as “whatever people need for hospitality.” A man from Mexico moves to the political in a mighty leap of insight: “It’s about keeping someone in Congress” because, he says, “one person makes a difference because he is there to listen to us.”

It’s Census 2010 live, with real immigrant learners and teachers working through the process. The Census comes just once a decade, but at Learning In Style, hope springs eternal.