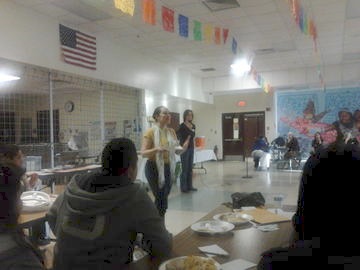 An interpreter translates for Latino parents.

A parent meeting at Green Central Park School, the elementary school that’s been embroiled in controversy this past year, had just gotten underway when a group of parents halted the program to show they were unhappy with the situation. After learning just the day before that Principal Catalina Salas, would be taking a leave of absence after being transferred from the school, the parents were incensed.

Sarah Snapp, the budget director at Minneapolis Public Schools, was giving a presentation about the school’s budget. She referenced the handouts available to parents at the meeting, and was explaining how to access information on the website when one parent, Mayela de la Rosa Cardenas, interrupted.

“The internet is in English,” she said in Spanish, which was translated by an interpreter. “The fliers are not in Spanish. If we had fliers during the meeting, we would understand better.”

About a dozen Latino parents were sitting in one of the corners of the room, and for the first part of the meeting, the interpreter had been translating what was said simultaneously with the speakers. However, without a microphone, and with side talking happening throughout the room and the constant cries of a young child throughout the meeting, they weren’t hearing her.

After some confusion, the interpreter got up front and center, and translated only after the speaker came to a pause.

The language barrier is just the tip of the iceberg of reasons that the Latino parents are so upset. They protested passionately over the April 25 transfer of principal Catalina Salas, who implemented the school’s Developmental Dual Language program, and are fearful of the changes for next year. The program will continue, but they worry that the program will be reduced. Next year, only one kindergarten class will be conducted in Spanish.

“All we get are lies,” said another Latina mother at the meeting.

Area C Superintendent Theresa Battle, who attended the meeting, responded to the Latino parents’ claim that they weren’t being heard by saying, “I have listened to you, along with Ruben Vazquez [the family engagement coordinator], but there are parents with differing viewpoints. Yes, there are differing viewpoints.”

In a separate interview, Battle said that how the DDL program will change has not been completely decided. “We’ll look at the results, and see what adjustments are needed… We are fully staffed to program it. We are looking at the data right now, and working with teachers to get recommendations.”

One of the changes will be for fourth grade students. “Students didn’t come in with strong academic language in Spanish,” Battle said. She said they’re making adjustments for the older kids.

When Battle first became aware that the Minnesota Alliance of Black School Educators had offended the Latino parents and likened Salas to Hitler,  “I immediately went to people who had expertise in that area,” she said. She took the letter that the Latino parents had written to the Superintendent and the Board of Directors, and then went to the Office of Community Engagement, where Ruben Vazquez was charged with working with the parents.

“I don’t know if the parents made the connection that I got Ruben involved,” Battle said. “We needed help with that conflict.” She says she’s still involved in the coversation, and wants the parents to feel safe.

Vazquez is still trying to work with the parents, and Battle says meanwhile, the district wants to keep the focus on the children. “Incremental gains are not going to get us where children are college and career ready,” she said.

As to the transfer of Salas, Battle said, “It was a difficult decision. We have to make unpopular decisions, but we have to make decisions for what is right for students.”

Later this week, I’ll be writing a bit more about how all of this controversy got started. I’ve spoken to Maryann Robinson, the African American parent who initially contacted the Minnesota Alliance for Black School Educators about inequities in the school, and I’m waiting on a bit more information, so stay tuned.