There was excitement in the air in the lobby of KFAI, a Twin Cities community radio station, on May 1. Leaders of Mujeres en Liderazgo, a Latina community organizing and leadership group, along with leaders of Centro de Trabajadores Unidos en la Lucha (CTUL), a workers’ justice group were gearing up to debut La Voz del Pueblo, a Spanish-language talk show.  Two leaders from each organization, form the regular hosts of La Voz del Pueblo. When Margarita Luna-Flores, a host of the show, was asked about her feelings on the first day, she replied, “I was nervous, but we had been preparing weeks ahead and we felt ready.”

La Voz del Pueblo airs every Sunday at noon on KFAI Fresh Air Radio, a local volunteer-run radio station. Past episodes can be found as podcasts on the KFAI website.

FULL DISCLOSURE: Trang Do is a freelance photojournalist and writer with the TC Daily Planet. She also guest volunteers as a radio board engineer for La Voz del Pueblo.

As a new addition to KFAI’s programming, the debut of La Voz del Pueblo brings in perspectives from these two distinct organizing groups, though not without disagreement from supporters of a show that previously held the spot.

The collaborative radio effort between these two groups came about through a similar passion in organizing campaigns related to Latino immigrant and labor rights issues. 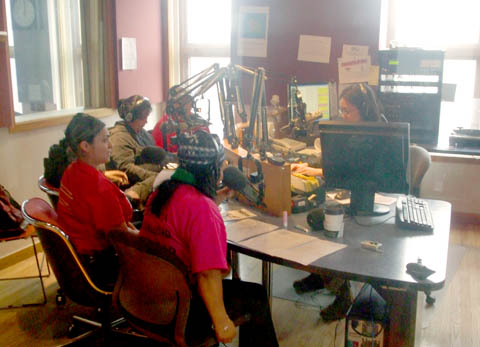 Mujeres en Liderazgo is a women’s leadership group that began in 2008 at the Waite House Neighborhood Center in South Minneapolis.  The program begins with a seven-month leadership training, led by organizer Maria Cisneros, which engages women in community organizing and achieving their personal goals. Graduates of the program form the Mesa Colectiva, through which the women continue to work on campaigns that were developed during the leadership training. The group is currently working on a municipal I.D. campaign, “I am Minneapolis,” with the goal of obtaining a multi-use ID card for all Minneapolis residents that may be used for identification, banking, parking, and discounts in local businesses.

CTUL is a worker-led organization that is currently organizing store cleaners and addressing concerns related to increased workload and falling wages. For over a year, CTUL’s Campaign for Justice in Retail Cleaning has focused on the Cub Foods grocery store chain and their parent company SuperValu. Recent public demonstrations to bring focus on the issue have been a 12-day hunger strike held in front of the Cub Foods  at Minnehaha Avenue and Lake Street in Minneapolis and a presence at a SuperValu shareholder’s meeting in Edina.

The mission of La Voz del Pueblo is to unite the Latino community by exploring issues and offering local information and resources. Live interviews and various guests are brought in who have personal experience or expertise on the topic of that week. Topics that have been covered include domestic violence, celebration of women as leaders, labor rights, immigration, legal resources, know your rights discussions, community gardens, access to fresh and local food and bicycling. The latest airing covered how to prepare in the event a family member is deported.

“The deportation of a family member is a devastating event for many and occurs in our community. Yet, many don’t realize that there are some rights that they have and how to take preparation steps such as how to put members on a visitation list while being held or have a plan if children are left behind,” says Katherine Percuoco, a supporter of La Voz del Pueblo.

La Voz del Pueblo replaced First Voices Indigenous Radio, which had previously run in the Sunday noon slot for nine months. According to a petition initiated by Ray Tricomo, First Voices was taken off the air in favor of La Voz del Pueblo due to the strong political nature of the former show. “No coherent reason was given” for why the show was taken off the air, Tricomo said. “When KFAI makes a decision, it’s usually made without consulting its listeners, and more specifically its supporters,” Tricomo continued. [See Tricomo’s Free Speech Zone article here.]

Tricomo does not hold a grudge against La Voz. He stated, “No offense to our Latino relatives, but like so many communities of color they seem to be stuck in the kind of rut that colonization has produced. The program is dealing with legitimate social, and economic issues, but there’s no real hint of revolution, and revolution is precisely what we need at this time.”

According to Ron Thums, the current program director of KFAI, “KFAI’s nine-member Program Committee selected this show over a number of other promising applicants for an opening on the station’s community affairs block. Fresh Air Radio prides itself on having ‘served underserved communities’ for the past 33 years, and this program is expressly the sort of programming that fulfills that promise. Through its multiple, involved hosts and affiliated organizations, La Voz del Pueblo speaks both to and from the Twin Cities Latino community. KFAI is very proud to have this program on our schedule, and to be able to point to it as an example of the kind of practical, people-centric programming we aspire to do more of.” 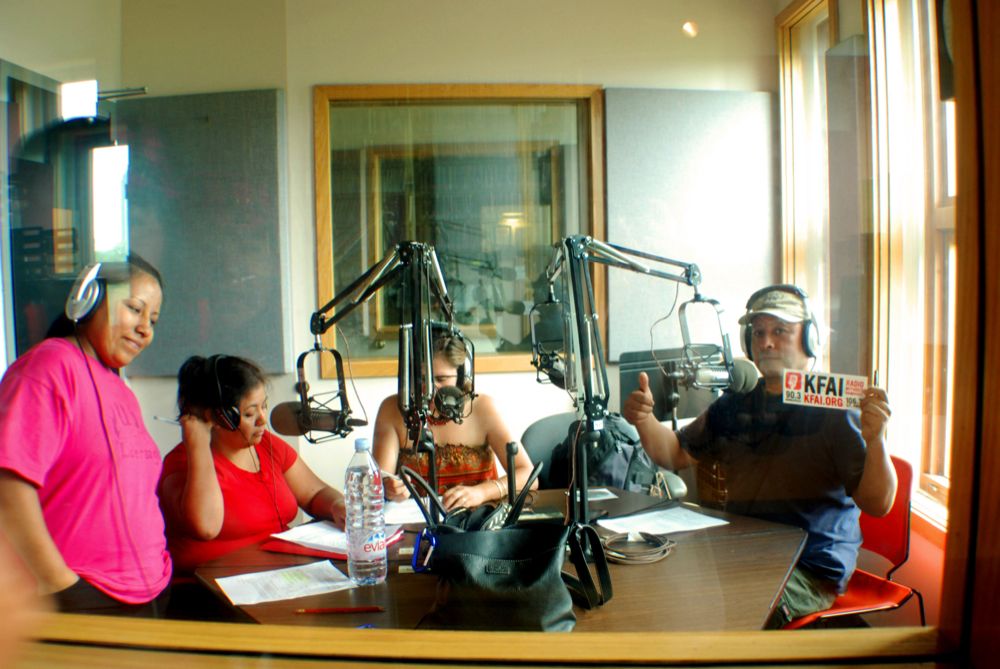 Although Thums did not go into detail on the processes for selecting programs or the factors considered when choosing to take a show off the air, he noted that KFAI has a strong preference for locally produced shows. First Voices Indigenous Radio is produced in New York.

Almost three months have passed since the debut of La Voz del Pueblo. The hosts are more energized, confident and hopeful than when they started the program. Guest callers from out-of-state have phoned in, indicating a growing fan base. On one airing, five guest callers representing different worker’s justice centers around the country came on to discuss wages, labor rights and common struggles within their community.

“I want to see the show grow with more listeners, expanded programs run by the Spanish-speaking community,” said Luna-Flores. “ There are many important issues that involve everyone. For now, the show is only in Spanish but we want to have a bilingual Spanish and English show.”