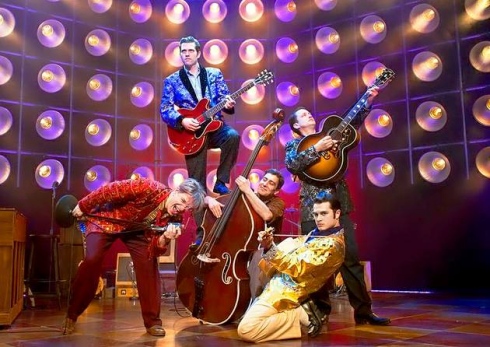 As I entered the State Theatre on Tuesday night to see Million Dollar Quartet, something immediately stood out to me.  I was of a minority.  The show, which takes place on December 4, 1956, attracted a crowd that was alive during that era.  This was the music that generation grew up listening to, the men they grew up admiring, and the culture that they embraced.  That being said, young people will enjoy the show too, as long as they are willing to travel back in time 60 years and experience the rock and roll age.

The show began with a slow start.  Literally. The opening curtain was delayed twenty minutes.  Once the show finally began, the narration by Sam Phillips, the owner of Sun Records and the man that discovered the Million Dollar Quartet, detracted from the excitement and fun of the music.  The dialogue read more like a documentary than a musical about four Rock and Roll legends.  However, once Perkins, Cash, Lewis and Presley took the stage together to perform together, the show quickly became full of life.

Two of the men stood out from the others: Jerry Lee Lewis (played by Martin Kaye) and Johnny Cash (played by Derek Keeling).  Lewis bounced around the stage, played the piano upside down and constantly cracked jokes.  He was always fun to watch and his piano playing was spectacular.  Cash was handsome and sultry with his deep, deep voice.  When he sang “I Walk the Line,” it would have been impossible to tell the difference between him and the real Johnny Cash.    Elvis (played by Cody Slaughter) cannot be ignored because his hip thrusts and other miraculous dance moves made it seem like the actual Elvis was on stage.

Just as I thought the show was over, the show went into overtime.  The lights started flashing, sparkling jackets came down from the ceiling, and the Million Dollar Quartet came back to the stage to perform for the last time.  With the audience on their feet, clapping, dancing and singing, the last 15 minutes of the show seemed like a concert, and was by far the most exciting and fun part of the show.  The performance then went into double overtime when they brought out W.S. Holland, the original drummer of Johnny Cash and one of only two men still alive that were present on December 4, 1956.  He proved that he still had it when he preformed the classic “Matchbox” with the rest of the guys.

The show finally came to a close almost 45 minutes later than expected.  If it hadn’t been for the last half hour of the show, I would have been a little bored and disappointed leaving the theatre.  But instead I left in awe of the great music these four men were able to create, the legacies they left behind, and wondering why our music today can’t be more like the music from the 1950’s?