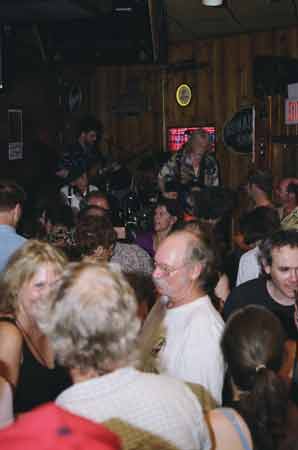 Some 200 revelers gathered to hear Willie Murphy and friends close down the Viking Bar for the last time.

On a hot Monday night in early August I joined more than 200 shocked and forlorn music fans who flocked to the Viking Bar to indulge in one last night of drinking and dancing with their friends and musicians at this West Bank institution. We all knew that Willie Murphy’s final note would be the last one played from the legendary small stage of the Viking before it closed its doors for good after 47 years of operation.

Old and young, hippies and punks, activists and anarchists danced wildly on the benches, bartop, and floors throughout the packed bar. Many were dancing as they came in the door. The crowd grew wilder as the night went on, and even a fight or two even broke out—just like in the old days. Musicians and patrons poured inside and out, sharing their memories and grief at this loss, one of the few remaining posts of the historic West Bank music scene.

The wake signaled an end to the days when Willie Murphy and friends crowded the small Viking stage and spilled onto the floor, making people get up and boogie on the old tile floor. It also brought an end to the regular Friday night shows with the Front Porch Swinging Liquor Pigs and KFAI Radio’s “Jackson’s Juke Joint.” We’ll miss the legendary Mardi Gras parties on Sundays, when Spider John Koerner entertained us with his foot-stomping old folk blues while we indulged in Marty Johnson’s grilled chicken and brats. No more benefits or birthday parties or any other music legends old and in the making at the venerable Viking Bar.

Longtime Liquor Pigs fan Mary Laurel True (who was proposed to on the First Avenue dance floor during a Pigs show) said it well, “You couldn’t have a bad night here. When the world’s a mess, everything was okay when you came to the Viking, at least for a few hours.”

Since the walls can’t talk and the doors are closed, we may never really know who was the first musician to christen the Viking ship with song. Many lay claim to that honor, including Bill Hinkley and Judy Larson, Tom Burns, and Spider John Koerner. “It could’ve been Bill and Judy,” said music booker George Bell, who has managed the Viking since 1977. “It could’ve been Tom Burns and Lazy Bill Lucas. It could have been someone else. It’s a mystery.”

The Viking has featured live music since the late ‘70s. Musicians played in a booth until the stage was built in the early ’80s. Since then, there have been a host of regular performers—most recently, the Liquor Pigs, who held down the Friday slot for the past nine years and Murphy, who hosted Blue Mondays for the past 16.

Bell’s favorites included Joel Johnson (the Viking’s first booker), Lazy Bill Lucas, and Baby Duke Aston. Aston played with the Joel Johnson Band, a Viking staple for many years. “I got married on that stage, in 1990! Joel Johnson played that, too!” Bell said. “I was there for so long. The Viking was my life; there were my friends. Now I’m just sitting at home, bored.”

Every day brought surprise visitors to the old bar, Bell recalled. Asked who was the most surprising, he thought for awhile. “It was me!” he said. “It was my 40th birthday party, and everyone came in wearing masks of me!”

Bill Hinkley and Judy Larson played at the Viking regularly for more than a decade, and their experiences there shaped their performances (and their audiences) to this day. “It was a great workshop!” Hinkley recalled. “We workshopped a lot of tunes there and our ability to interact with the crowd. The boundaries between the audience and the performers were stretched.”

Of the Viking’s closing, Hinkley said, “It really is sad. It’s sad they didn’t let people know about it longer. Like the Triangle Bar, I didn’t see it closing in my lifetime.”

Neither did Liquor Pigs bassist Rusty Jones. “I’ve had a hard time catching my breath,” he said. “They should wrap this building in cellophane and preserve it for 50 years. There’s nothing like this, anywhere.”

Honky-tonk singer/pianist Andrew “Cadillac” Kolstad, the son of longtime West Bank musician Papa John Kolstad, called the Viking a “community center” and recalled spending time there long before he was old enough to drink. “The Viking was probably the first bar I went to as a child,” he said. “I’m glad it was around long enough for me to play in the same place as the greats I grew up with. I remember looking up and seeing ‘Bill and Judy’ on the marquee and thinking, ‘Wow, big stars.’ To see my name up there a time or two is a big honor.”

Mike Gunther, a local indie folk-rock favorite, was also inspired by the Viking at an early age. “I was 16, and I’d come by and the door would be closed, but you could hear the music up and down the street,” he recalled. “We’d hang out at the Hard Times or Riverside and come listen under the window behind the stage. I’d always hear Willie — that’s who I went to see when I came of age.

“The last four years I came regularly. I came here and Palmer’s alone when everyone else was scared of the bar. It was affordable. It’s an old-style liquor bar — it’s no gimmicks, no frills, a good place to drink. This is such an organic place, rather than someone coming in with a business plan. Places like this build from the ground up. They begin casually. People want the authenticity. Something like this evolved out of time, not like the chains from Miami, or Drink, or most places on First Avenue.”

For Murphy, who’s hung out at the Viking since the ’60s and has inspired so many musicians over the years, the Viking’s closing marks the end of an era. “It was sort of the last stand of the West Bank that had music like there was so much of in the old days. There were poetry readings, and art . . . It’s a real icon in the neighborhood,” he said.

“I’m going to really miss it,” he added. “I sit on the curb and look at where the Triangle was and think of when it was full of people. It’s really sad. The real soul of the West Bank was youth counterculture, and it’s disappearing.”

The Liquor Pigs have taken up residency at the Eagles Club from 7 p.m.-9 p.m. every Friday, which is where you’ll find Willie Murphy every other Friday. Meanwhile, Jackson’s Juke Joint moves over to the 331 Club for a two-month trial run.