Now that the weather is cold and most of the trees have dropped their leaves, now that the farmers are finished harvesting their corn, a fleet of low-flying planes is descending over Minneapolis and St. Paul, shooting laser beams across every square meter of the metro area.

It’s as sexy as elevation mapping gets.

The planes are collecting high-resolution elevation data for the entire state of Minnesota, using a technology called LiDAR or Light Detection and Ranging. Planes shoot down a beam of laser light, which bounces off the ground and comes back to the plane. Software can then determine the point’s elevation within a foot. The fly-overs started in 2010 and by 2013, engineers, researchers and state agencies will have access to elevation data for every square meter-and-a-half of Minnesota, with a resolution at least five times higher than what’s available now. (See the Minnesota Geological Survey site for detailed information.)

Minnesota is one of only a handful of states investing in public LiDAR data, which project manager Tim Loesch said will make it significantly easier for public agencies to manage flooding, restore wetlands and fight forest fires. Loesch said it’s unikely that legislators would have approved the project’s $8.3 million price tag without Legacy Amendment funding.

“I get calls on a monthly basis from other states asking us how we did it,” Loesch said. “Without the dedicated fund for clean water projects, we wouldn’t have it.”

Clean water projects around Minnesota have already benefitted from LiDAR, and Loesch said the data is set to save countless hours and dollars on future Legacy projects. “Every one of the projects you fund through the Legacy program is going to need high resolution elevation data,” he said.

Take wetland restoration, for example. Depressions in the landscape can help public officials identify drained wetlands. In the past, if a private landowner were to come to a DNR office to ask about restoring wetlands on their property, Loesch said the office would have had to schedule a survey, which would keep a couple DNR employees busy for one or two days. With LiDAR, the office can look up elevation data for the individual’s property and give them an answer on the spot.

Researchers from the University of Minnesota and the St. Croix Watershed Research Station are using the data to determine the source of increasingly large volumes of sediment washing into Lake Pepin. Using LiDAR data, they found that the bulk of the excess sediment is no longer coming from agricultural runoff but from eroding bluffs and riverbanks. That research will be used, likely in conjunction with more LiDAR data, to find the most effective locations for wetland restoration and other erosion fixes. (Contact patrick.belmont@usu.edu for full text of the Mississippi Mud report.)

And the data is invaluable for flood-prone areas like the Red River Valley, where Loesch said LiDAR data enabled local officials to determine exactly how many sandbags an individual would need to protect their home.

In the north woods, forest maps will show firefighters where buildings are located, and potentially what kinds of trees could go up in smoke. In cities like Boston, officials are using LiDAR to study the angles and directions of homes’ roofs, to determine where solar panels would be most effective. In rural Minnesota, LiDAR will be used to find the best sites for wind turbines. The DNR will be able to redraft flood insurance maps for FEMA.

Despite LiDAR’s range of uses, Loesch said he spent years trying to find funding for the project. “We couldn’t get anywhere in the legislature,” he said. “We were bringing our proposition in against state parks and health insurance and human services and transportation. I understand where LiDAR falls in those priorities.”

When other states call him for advice, he says Legacy Amendment. Voters passed the Amendment through a referendum in 2008, increasing the state’s sales tax by three-eighths of a percent. One third of the fund goes to clean water projects.

The clean water fund covers elevation mapping for every 1.5 meters, but some counties and municipalities “bought up” to collect more detailed data. Minneapolis, St. Paul and Maple Grove will have eight data points for every meter. Dakota County will have two. The extra seven points cost the Twin Cities $648 per square mile, Dakota county paid $84. Minneapolis did not buy-up, but a grant from the United States Geological Survey paid for the extra data. 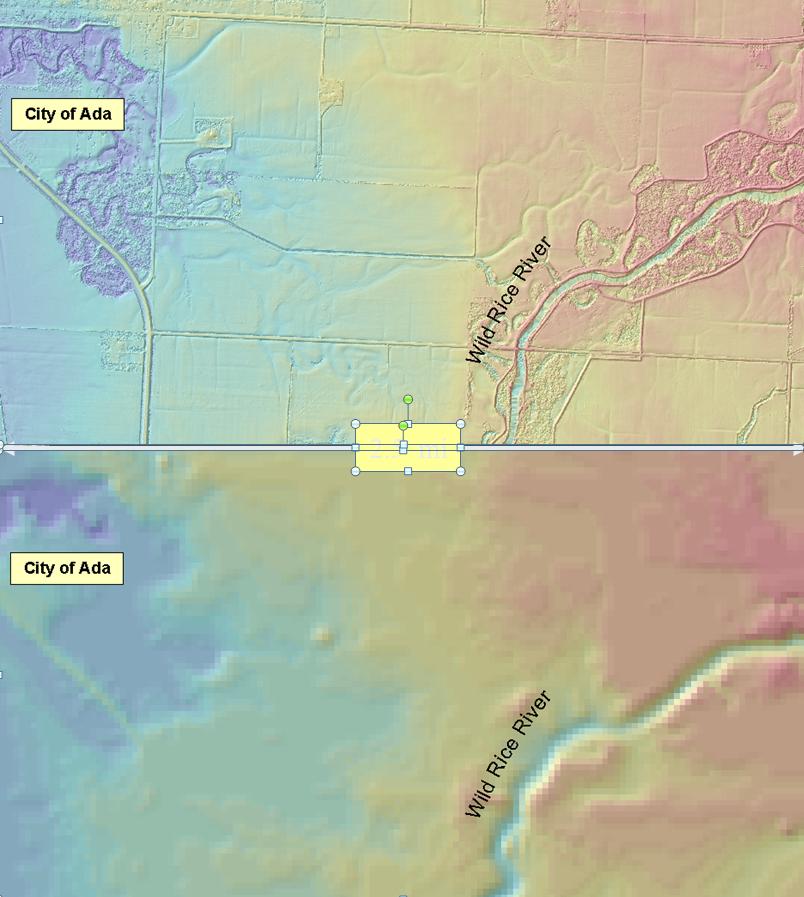 LiDAR’s lasers don’t see well through heavy foliage or dense clouds or wind or water. Flooding from the Mississippi and Minnesota rivers halted plans to map the metro area last spring. But Loesch said the entire metro could be mapped in five days, as long as the sky stays calm and clear.