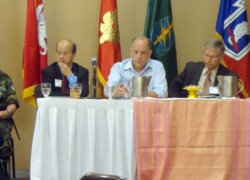 “If your actions inspire others to dream more, learn more, do more and become more, you are a leader.”

This was the quote by John Quincy Adams Sirth Chanthasack, executive director Laotian American National Alliance Conference Co-Chair used to open the final day of the conference as he thanked the volunteers, speakers and audience encouraging all to attend the conference next year to be held in Ft. Worth, Tex.

More than 100 Lao American leaders from throughout the country attended the conference held over the past two days. While, the conference was primarily attended by ethnic Lao, the organizers made efforts to include all ethnic communities from Laos.

Speakers and attendees from other Lao ethnic groups such as Tai Dam and Hmong were a part of the program.

Brooklyn Center Mayor Tim Wilson opened the conference Friday conveying his welcome and appreciation that they chose his community of Brooklyn Center to host their national conference. Mayor Wilson commended the Laotian American National Alliance for its dedication in addressing the important issues facing their community such as community health and higher education. He also applauded their efforts to train and develop leaders within their community as they emphasize civic participation as well as thinking outside the box to develop mutually beneficial partnerships

This was followed by presentations on the Status of Lao Americans locally and nationally, and with strategies for students to use higher education to pursue their dreams. Presentations on some of the major health issues facing the Lao community such as hypertension and diabetes were offered, and the event closed with a presentation on immigration and deportation.

This presentation updated audience members on changes on immigration law and how those committing serious crimes could potentially face deportation back to Laos. Friday concluded with a party and dance held at popular Lao banquet hall, Boasavanh in Brooklyn Park.

Saturday morning opened with Keynoter JD Hokoyama whose inspiration presentation on what is effective leadership was covered in last week’s issue of Asian American Press (http://aapress.com/community/10571/). 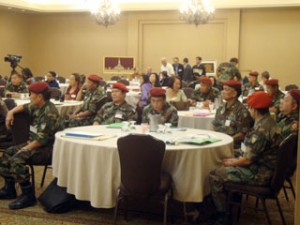 The final day of the conference had a special emphasis on Lao veterans and issues surrounding recognition and benefits some of the speakers that spoke to this included State Representative Joe Mullery, Khao Khinsixiengmay (Royal Lao Officer and Executive Director of Lao America from 1994 – 2012.). Chao Lee, a senior aide to U.S. Rep Betty McCollum (DFL-4), who is a former Woodrow Wilson National Fellow, was also present.

It was noted that over 70 percent of Lao Americans who settled as refugees in the United States served in the military or were military family members. Yet, many of them do not receive health benefits and their needs and issues remain largely unheard.

There was a considerable presence of Hmong veterans as well as some American veterans in addition to those of the Royal Lao Armed Forces and Special Guerilla Unit.

The discussion talked about precedent of refugees from other nations that served on the U.S. side and received recognition. It also spoke of the need for all groups that supported the US efforts in Southeast Asia to unite and present a unified voice rather than attempt to address the issues by individual ethnic communities.

Xia Vue Yang, founder of the Lao-Hmong monument in Sheboygan, Wis. (http://www.laohmongusmemorial.com) also urged a united voice and pointed to some of the recognition for veterans accomplished in his community.

“It is up to us to come together and be united, our veterans are dying and in 10 to 20 years they will be gone,” Yang said. “We need recognition which will live on forever.”

Another important point Rep. Mullery made was that significant language related employment obstacles exist contributing to unemployment or underemployment in the Lao community. He spoke of the need for individuals to learn technical English prior to conversational English.

Mullery noted that although State government chose to ignore the proposal later it was funded by the Federal Government who of 1,900 proposals received deemed it as the highest rated proposal.

Other topics also included a special presentation by Dr. John Jovanovich on Hepatitis B and how it is chronically affecting a large segment of the Lao population.  He noted many of the symptoms are not noticeable at first and by the time they manifest themselves it is often in the late stages of liver cancer or other disease and leads to death or diminished quality of life. He urged people to be tested as a huge proportion of the Lao community carry Hepatitis B. He noted that in California, liver cancer is the leading cause of cancer death among Lao men. (Asian Liver Center, Stanford University)

Perhaps the most moving presentation of all was given by Penh Lo, a Tai Dam American. He shared his personal struggles being raised in Iowa.

Lo talked about how ashamed he was not to be White and how he would dye his hair red and wear green contact lenses and scrub is skin so hard in efforts to make it white that at times it would bleed. He said that during his teen years to young adulthood he did not realize all the sacrifices made by his father.

He only spoke later about how he learned of the horrors of a war he was too young to have been a soldier, that as the blood that runs in his veins comes from his mother and father he can feel the pain and experiences as if though he himself had gone though the horrors.

He talked of his mothers having to muffle their infant’s cries to the point of death in order to avoid being discovered by soldiers or how men were forced to kill their friends in order to be allowed to survive.  As Lo became older he came to understand why his father only rarely spoke of the stories and that was only when he had been drinking.

He called for elders to stop seeking revenge, “If you don’t learn to forgive, we will always kill each other,” he said.

Lo challenged the elders to tell their stories and let go of the hatred.

“Share your stories, but also have faith in us,” he said. “We may not know how to speak Lao, but it doesn’t mean we don’t want to know.”

Lo called out desperately urging the elders to trust the younger generation.

For more information on LANA – www.lana-usa.org.