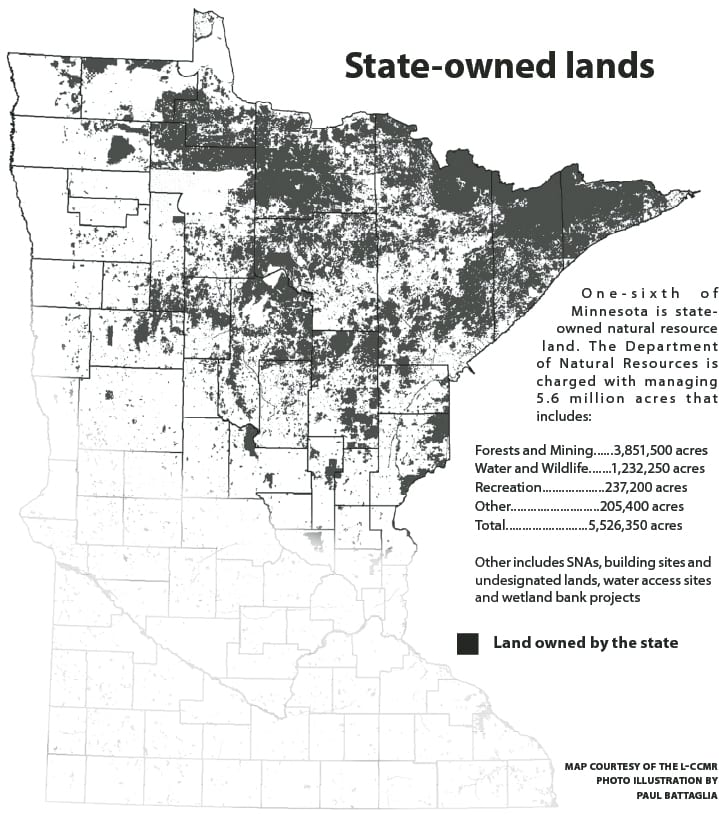 If there was any doubt how much Minnesotans love their parks and open spaces, it should have been erased with passage of a 25-year tax increase known as the outdoor heritage fund.

In fact, one-sixth of Minnesota is state-owned natural resource land. The Department of Natural Resources is charged with managing 5.6 million acres but, according to a legislative audit, it is falling down on the job.

The Natural Resource Land report, released March 5 by the Office of the Legislative Auditor, shows that the DNR lacks the resources to manage its current land holdings, much less additional purchases.

The department plans to acquire significantly more land, including 3,000 acres for the proposed Lake Vermilion State Park, the purchase of which Gov. Tim Pawlenty negotiated with U.S. Steel. Yet the audit identified $125 million in deferred maintenance of current state parks, trails and recreation facilities. There is another $16.7 million backlog for state forest roadways, and scientific and natural areas.

“Sometimes we wonder, ‘How much is enough?’ How much non-human land do we need before we’ve done our part to protect Mother Earth, or is the earth here for us to use in several different ways – play on it, log it and farm it, mine it?” questions Rep. Mike Beard (R-Shakopee).

Vice-chairman of the Legislative Audit Commission, Beard said, “The mission has morphed. So we can hardly blame the DNR … because I think we as legislators have given them conflicting missions. I can’t read that report and throw rocks at the DNR. I think we have to hold up a mirror.”

Going forward, the Legislature needs to require the DNR to prepare a long-range analysis that compares its budget needs to realistic funding levels, the audit stated. DNR Commissioner Mark Holsten doesn’t disagree and said he plans to implement many of the auditor’s recommendations.

“We see it as being, quite frankly, a validation of all the things we’ve been talking about with (legislators) over the last 46 years,” Holsten said.

A bipartisan group of legislators requested the audit, which is being digested on both sides of the aisle.

“I think the auditor did an absolutely great service for the state,” said Rep. Jean Wagenius (DFL-Mpls), chairwoman of the House Environment and Natural Resources Finance Division.

The forest through the trees

State forests, particularly in the Arrowhead region, weigh heavily on the DNR’s role to provide economic benefits. Forests comprise the majority of the state’s holdings. Acquired nearly 200 years ago from the federal government, the land is held in trust with the understanding that it gets harvested, and the revenue gets deposited in a Permanent School Trust Fund. Proceeds supplement K-12 education funding, so it is in the state’s best interest to maximize trust land results. But a checkerboard pattern of land holdings in northern Minnesota produces inefficient results, according to the audit. Problems are compounded by the potential for invasive species and a lack of DNR staff to work on tree care. Legislative Auditor Jim Nobles said the DNR’s new forest land asset management plan will help guide future sales, purchases and exchanges.

When deciding which school trust fund properties to buy and sell, the DNR receives direction from the Permanent School Fund Advisory Committee. Rep. Denise Dittrich (DFL-Champlin) said 3,800 acres within the Boundary Waters Canoe Area Wilderness fail to generate revenue and the state is not meeting its financial obligations to the school trust fund. She sponsors HF3084, which would request negotiations with the U.S. Forest Service on the sale and exchange of school trust lands in the BWCA. The transaction could earn an estimated $80 million for the fund, Dittrich said.

The report also concludes that the DNR should conduct more prudent sales, acquisitions or exchanges with local governments. For example, the state could expand a land asset pilot project underway in Roseau County.

Last year, the county and the DNR examined their land holdings, said Roseau County Commissioner Jack Swanson. Each has identified 320 acres to potentially “exchange,” mostly in northwest Roseau County. The DNR would obtain county parcels located within state land holdings and the county would receive the title to 320 acres of state land that it could then sell and put back on the property tax rolls.

It’s a win-win proposition, in theory, but the deal isn’t done yet. There are still appraisals to do, but Swanson is hopeful the details can be worked out.

“It’s a prime example of how the state and counties need to work together to solve problems, not work separately,” he said.

Swanson’s advice for other counties is to strengthen relationships with the regional DNR office staff. Although the pilot project has been “frustratingly slow,” Swanson said it’s “one of the more refreshing things I’ve worked on.”

Unlike private landowners, the state is not required to pay real estate taxes for land it owns within local government boundaries. Instead, counties have come to rely upon a state funding formula that gives counties a “payment in lieu of taxes,” a practice called PILT payments.

For the first 20 years, PILT payments did not keep pace with inflation, so changes were made to the formula beginning in 2001. Since then, 90 percent of the counties have been paid substantially more than if the land were privately held, while the other 10 percent receive less, according to the audit.

“There is an opportunity for reform of PILT,” said Rep. Rick Hansen (DFL-South St. Paul), a Legislative Audit Commission member.

Easements allow the state to conserve and protect sensitive land without owning it. Typically, the landowner is paid a sum for relinquishing use of their land that falls within the easement. But the DNR is grappling with how to monitor them all and lacks baseline information for some of the 1,000 conservation easements it owns, according to the audit.

By comparison, the Board of Water and Soil Resources owns and manages 5,000 conservation easements. Legislators are looking at ways to streamline easement management within each or across both departments.

A copy of the auditor’s report is available online at www.auditor.leg.state.mn.us